First dates test your vision and can seem pretty much like job interviews. You try to learn more about your possible mate to be sure that you want to develop a relationship in the future. If you can listen properly and pay attention to the necessary details, you don’t need any probing questions. Just note which topics are the most frequent in a man’s speech.

Bright Side knows the warning signs that indicate the wrong mate. 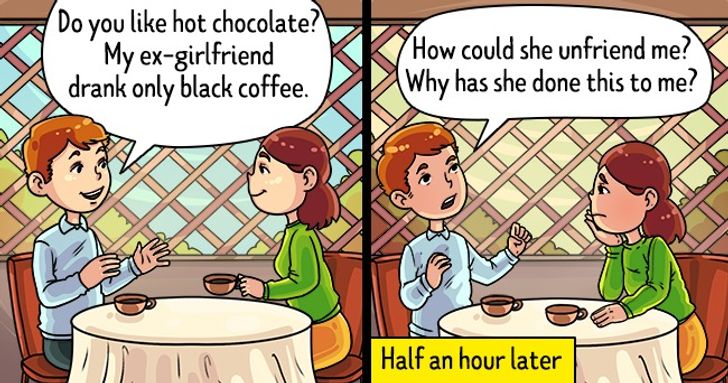 Former relations are always tricky. If the date becomes the man’s deep analysis session, it’s a warning sign. It seems that he is stuck in his last romantic affair. Are you sure you want to listen to him complaining about his ex and become his shoulder to cry on? 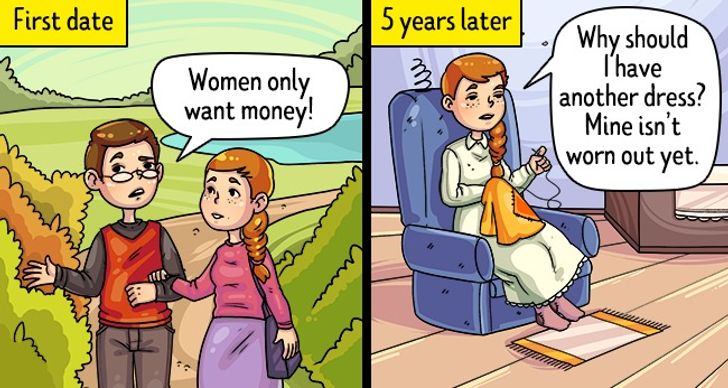 “All women have only the aim to seduce a rich guy and use his credit card!” If your admirer continues repeating this, he’s not for you. He may justify his being a bit greedy this way, and he may also demand that you constantly prove you don’t have any mercenary motives. 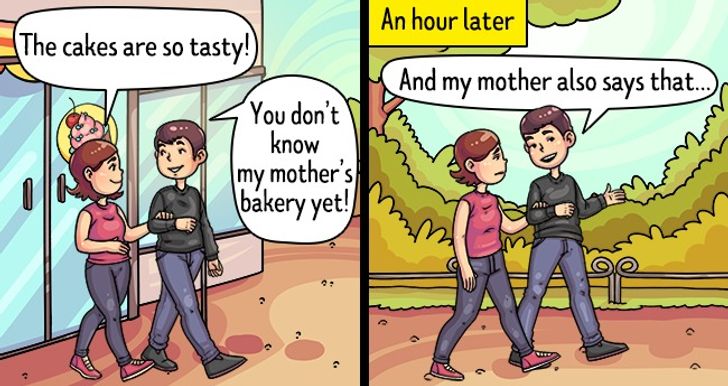 Loving one’s parents is awesome, but there should be limits in demonstrating it, especially during the first date. Be at least slightly on alert if your companion speaks about his mother too often. The possibility of building an independent family in such a case is doubtful. It is more likely that your mother-in-law’s opinion will always have the leading role. 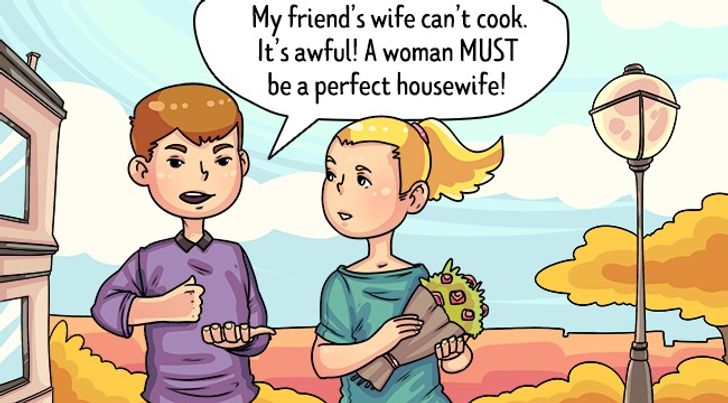 To be exact, this is purely about men/women role stereotypes. Of course, if you are planning to be only a good housewife in the future, there’s nothing to worry about in this topic. But if you want equality in your relationship, you should avoid such conservative men. 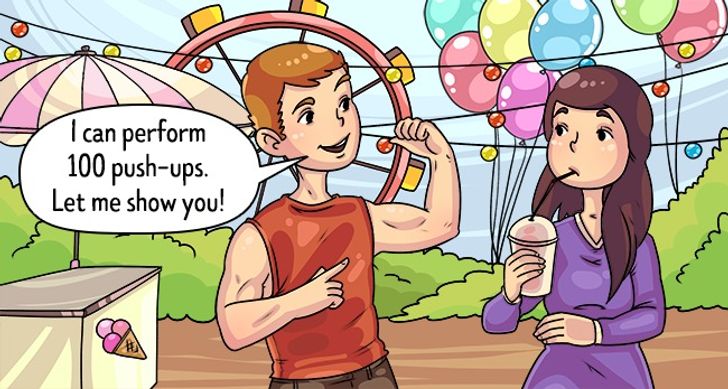 Does your mate want to look physically strong or manly with you too much? Does he tell you stories about how he once punished the “bad guys” with one good strike? He may not be safe enough. This doesn’t mean he will be aggressive with you, but his patterns of behavior can still cause certain problems. 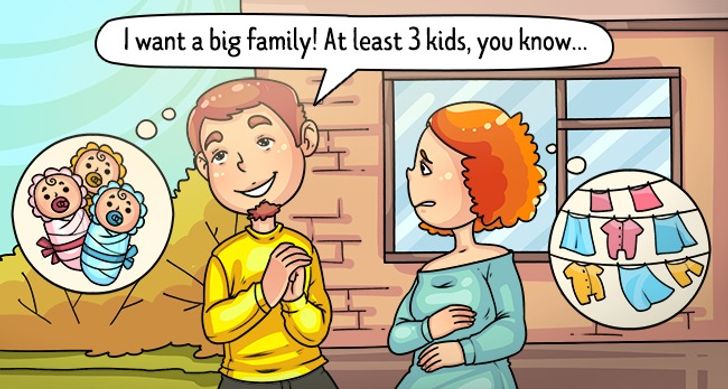 This is about the man who really likes talking about his nephews, godchildren, neighbors’ kids, etc. He also immediately shares his plans for a big family of his own. Well… He probably just wants to seem cute using the “all women want children” stereotype. Or he is telling you the truth, and it is not so bad if you really want to become a mother. If such outlooks do not make you happy, it may be better to find a person with similar worldviews. 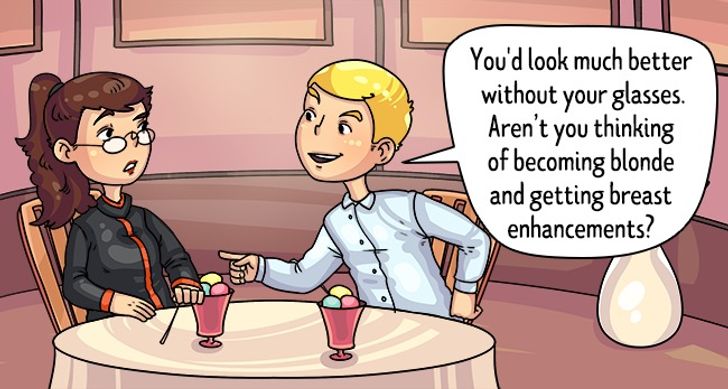 This warning sign is built upon the relentless focus on advantages and disadvantages of one’s physical looks. It is better to avoid a relationship with a man who constantly talks about real beauty, body shapes, leg length, etc. He is trying to “format” you. You may reject communicating with such an idol-seeker.

Almost all the interesting stories from your mate are connected to his friends, and he is even a bit contemptuous to those who have separated from the main “company.” This man also might prefer seeing his friends to spending evenings with you.

It is rather difficult to collaborate with such a person. You should always foresee that his plans will include his friends. Maybe you should save your nerves. 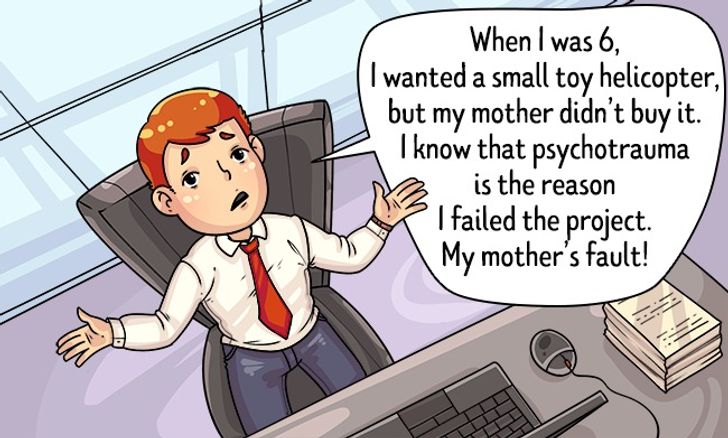 Your interlocutor has a habit of making excuses for each of his failures or misfortunes, actively accusing everyone around him of all his faults. He’s late for a date because the taxi driver didn’t come on time. There will be no salary bonus because his boss is evil to the root. And, of course, Kate, his coworker, has a higher income not because of her professionalism…

“It’s their fault!” Having such a motto, your man can hardly build a strong relationship. 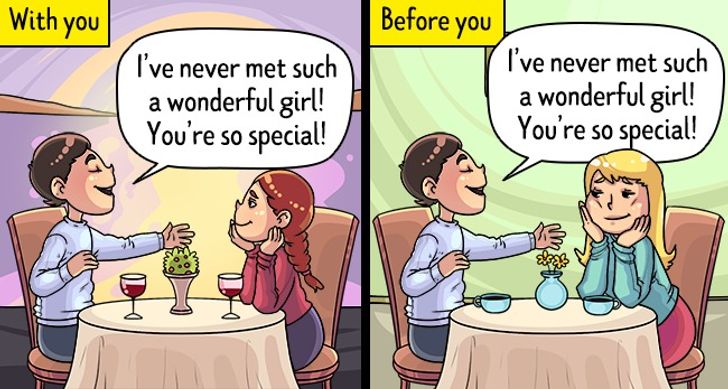 Being used in the right way, compliments help you feel good and blossom. But if there’s too much complimenting, it gives grounds for certain doubts. First dates full of sweet words should alert you. There is a possibility that you are not the only girl to hear them. Try not to confuse sincerity with pick-up tricks and fast talk.