Many of us found mysterious objects in our childhood and we could only guess what they were supposed to be for. It turns out that even adults can be curious about these things and want to find out the truth. They’re lucky they have the internet with its many ever-present users who are ready to answer their questions and who know that each object has its purpose.

At Bright Side, we were curious when looking through the posts of the community created for the identification of mysterious objects. However, some of these objects are still a mystery, and we’ll show you one of them at the end of the article. If you have ideas about what it could be, share them in the comments.

1. “This thing is right in the center of my bedroom’s floor, which is a converted dining room in a 1920s apartment. I can’t figure out what it is.” 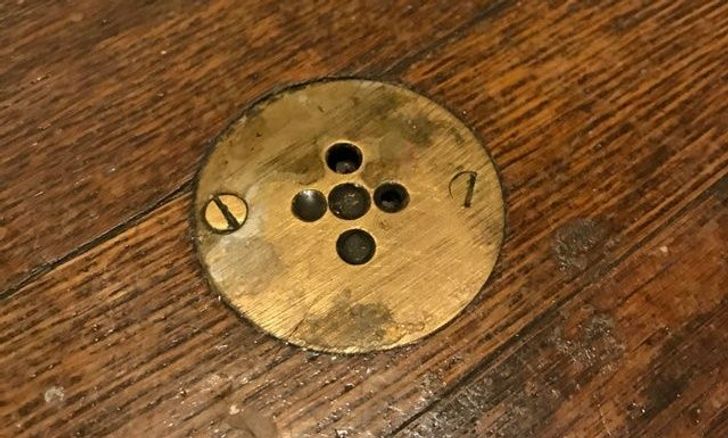 Answer: This is a servant floor call button.

2. “The house was built circa 1950. The left door is a linen closet. Right door is… What? It’s so deep that it takes up space in a closet around the corner.” 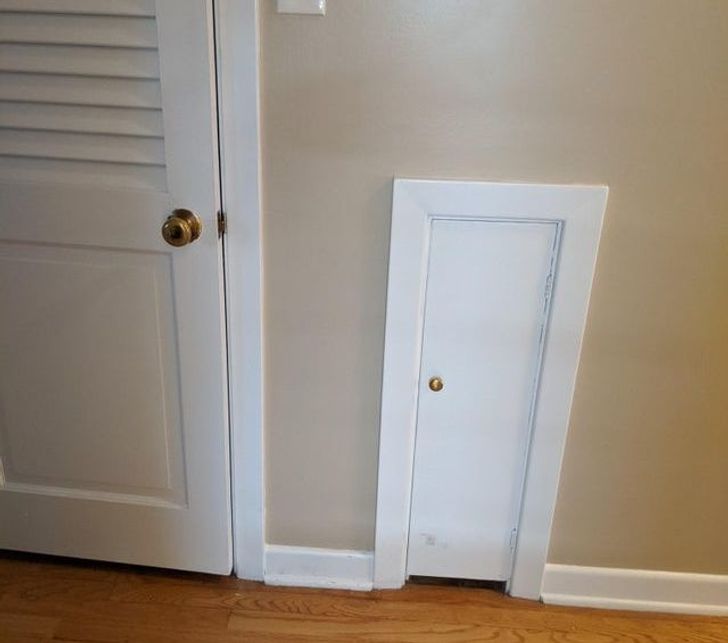 Answer: “My house, built in the US Midwest in 1951, has one. I remembered I have the blueprints to the house. This thing is labeled “Card table space below.” 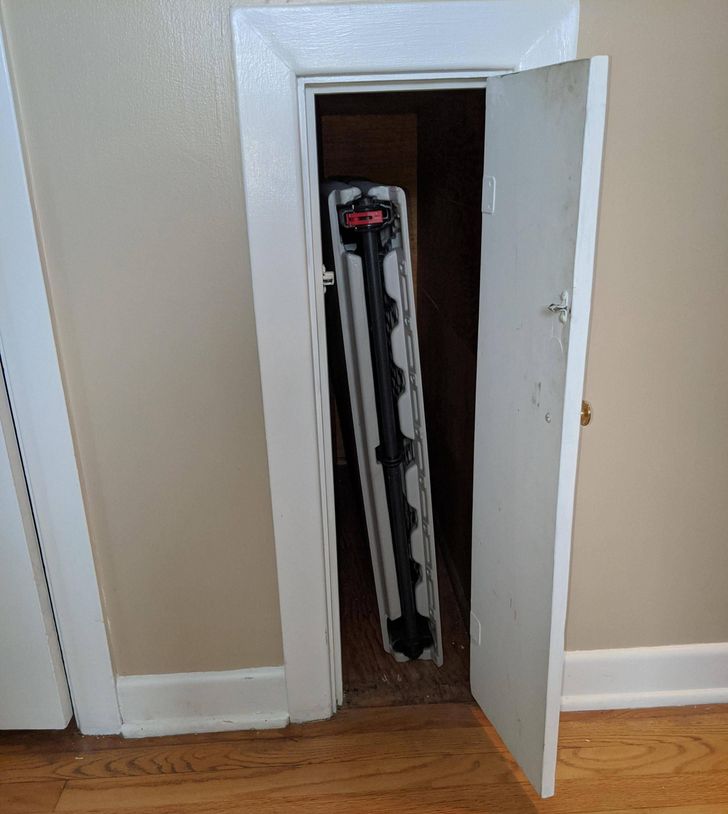 3. “A goat in a field in Scotland appears to have handlebars added to his horns?” 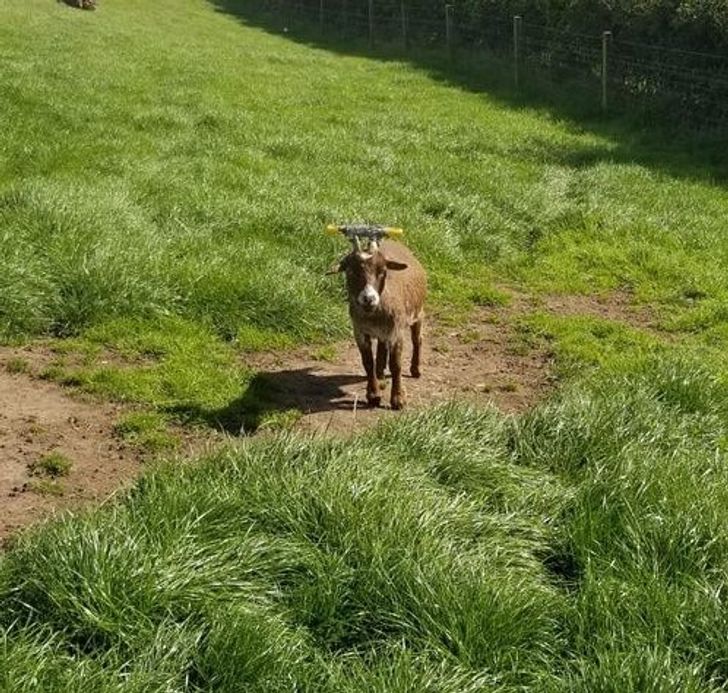 Answer: “Having had goats before, for a number of years, I’m confident that after about the 900th time that the farmer had to free this guy from a fence that he had stuck his head through, horns and all (and couldn’t get back out), the farmer settled on this method of ensuring that the goat couldn’t stick his head through far enough to get his horns snagged.”

4. “I keep seeing this little box on many different cars in my neighborhood. It looks like some sort of a lock box?” 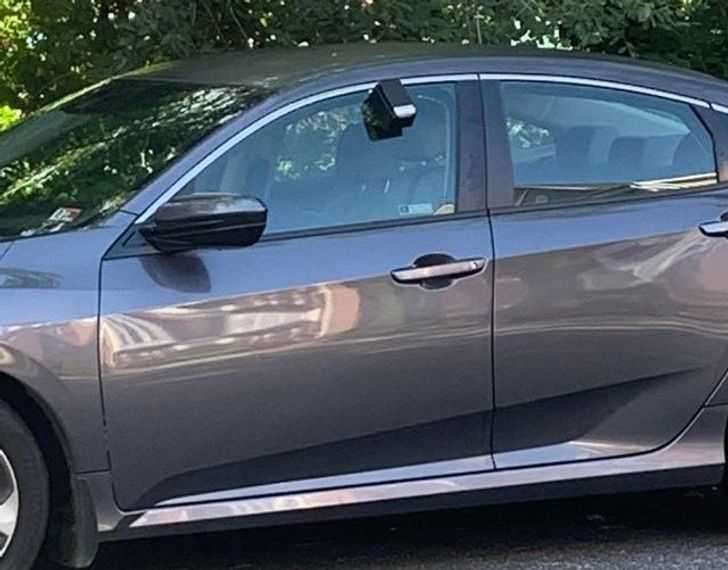 Answer: “It’s a dealership lock box. The car keys are stored in the box so that different salespeople or mechanics can drive the car.”

5. “What are these weird weights that showed up in my hotel room while I was out?” 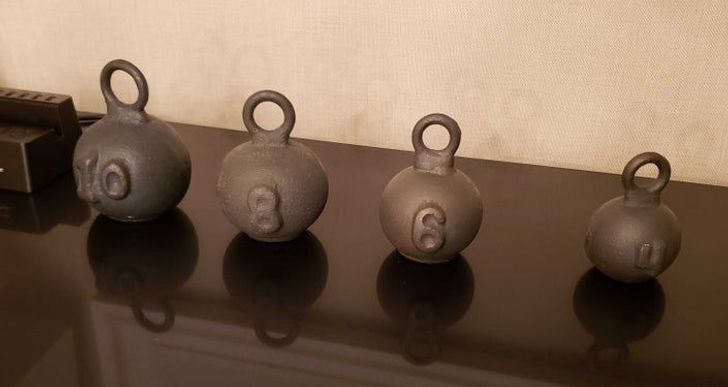 Answer: “They are fishing weights for deep sea fishing. I have a box full of them in the garage. Why they are in a hotel is beyond me. Maybe they use them for something else.”

6. “What is the purpose of the ‘chip’ in the one prong of this fork? At first, I thought it actually was just a chip, but turns out it’s on multiple forks in my drawer.” 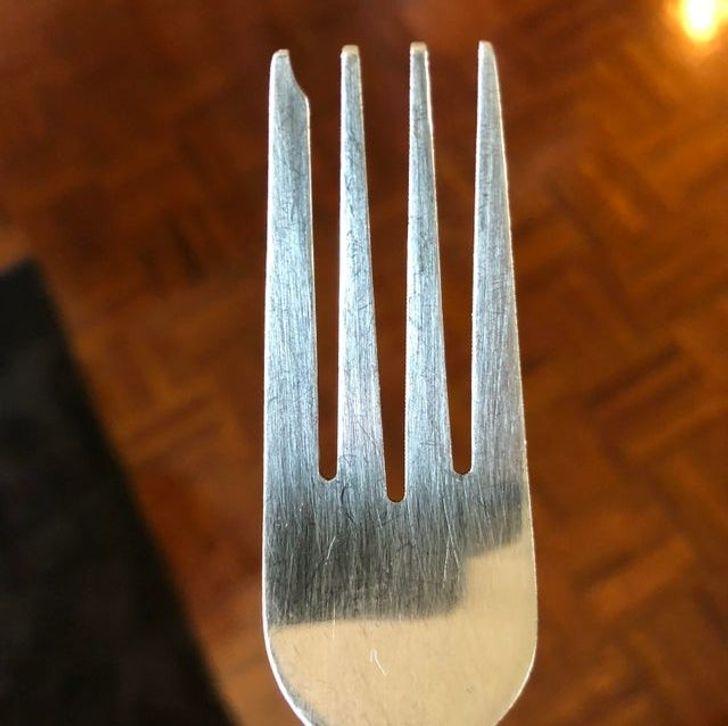 Answer: “They make one tine wider for cutting stuff.” 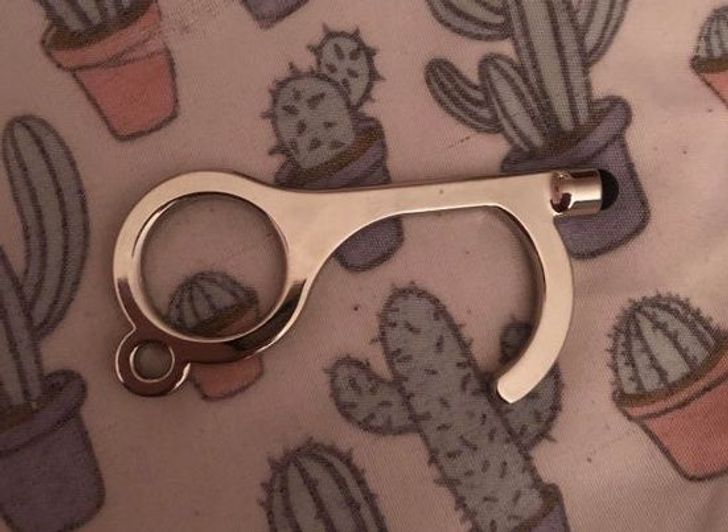 Answer: “I guess it’s for opening door handles without touching them.”

Answer: “These were how old reflectors were made, like for railroads.”

9. “I found this blue glass token in a field in France, though one of the ships flags kind of looks like a Union Jack. Is it a game piece or a historical thing?” 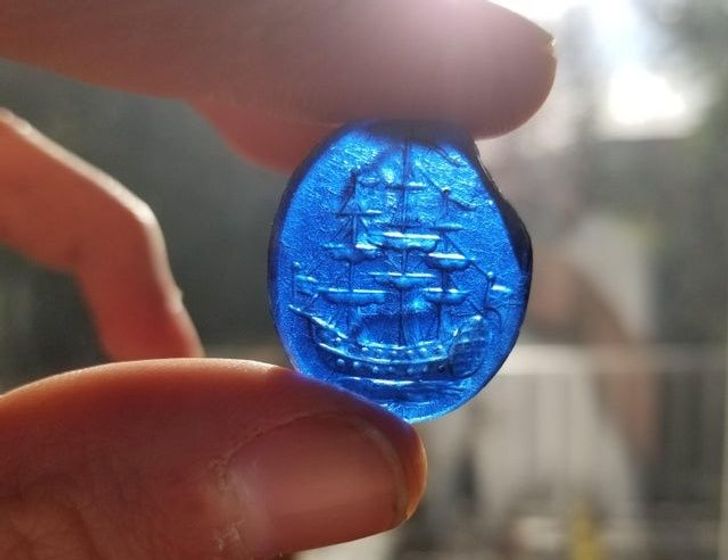 Answer: “I’m pretty sure it’s a historical thing, not a game piece. I bet someone is really upset to have lost this unless it’s been in the field for decades. Search terms: intaglio, glass (or glass paste), gem (or medallion)”

10. “I found this thing on the street about 2 years ago. The red light was glowing brightly for about 5 days and then dimly for almost 3 weeks, before fully going out.” 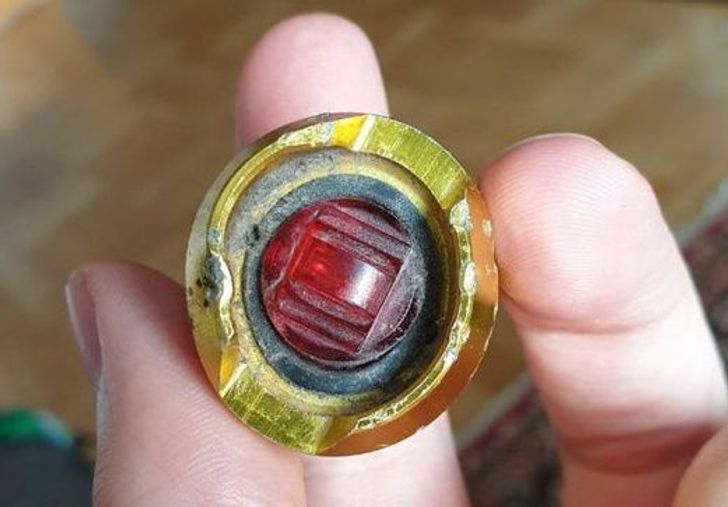 Answer: “This is a bike backlight.”

11. “I inherited this ornate large pendant? Or is it a wall decoration?” 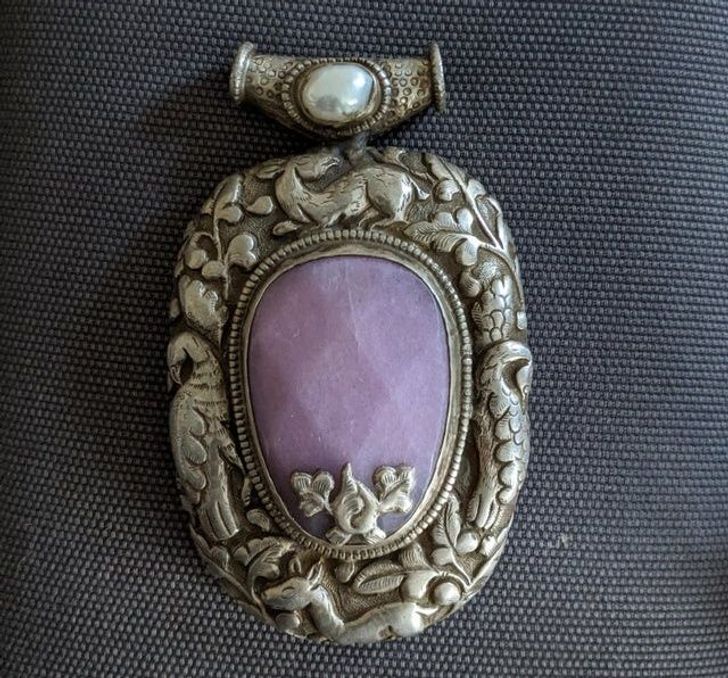 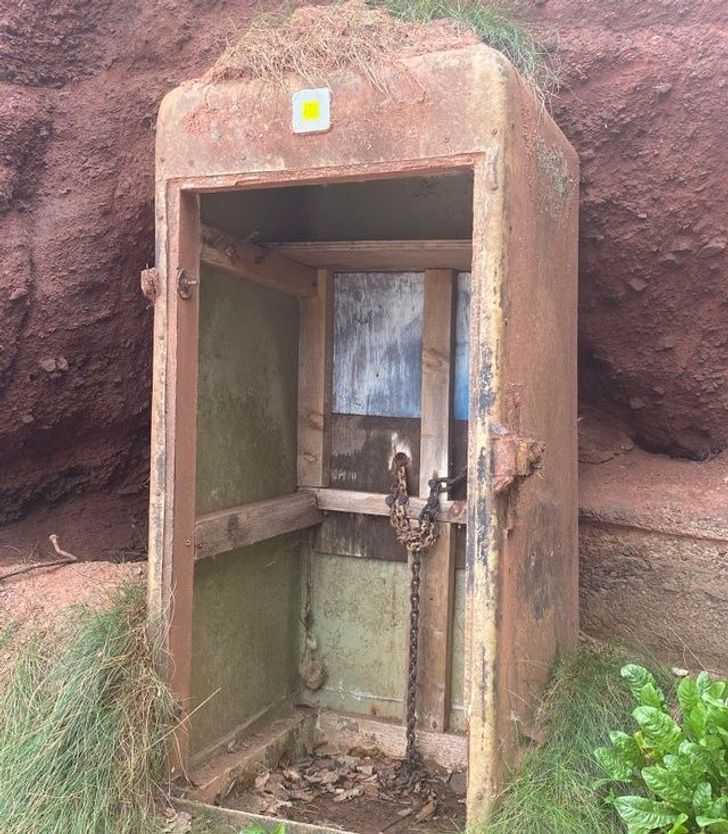 Answer: “It could be a line workers hut, used to store equipment and bits and pieces. With the casualization of the workforce, these huts have gone out of use.”

13. “I found this when metal detecting outside an old church. What is it?” 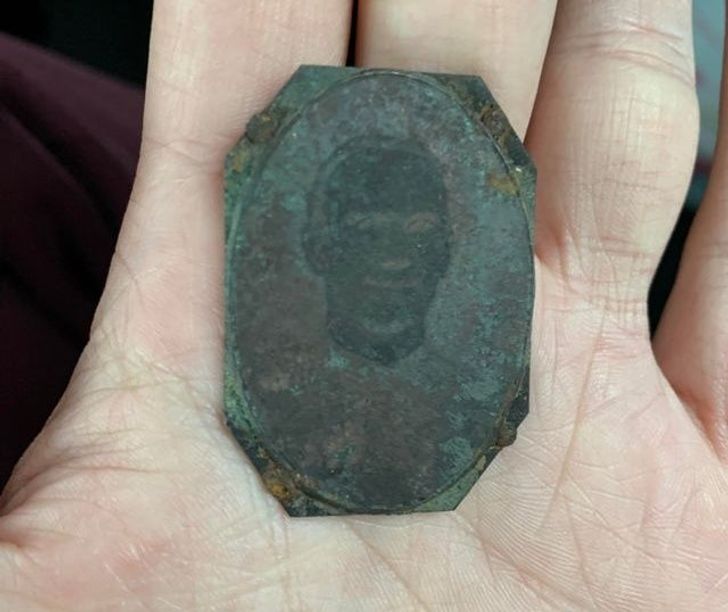 Answer: “It looks like a Ferrotype photograph. They started being used in the 1850s.”

14. “Help me identify what these are and what they were used for?” 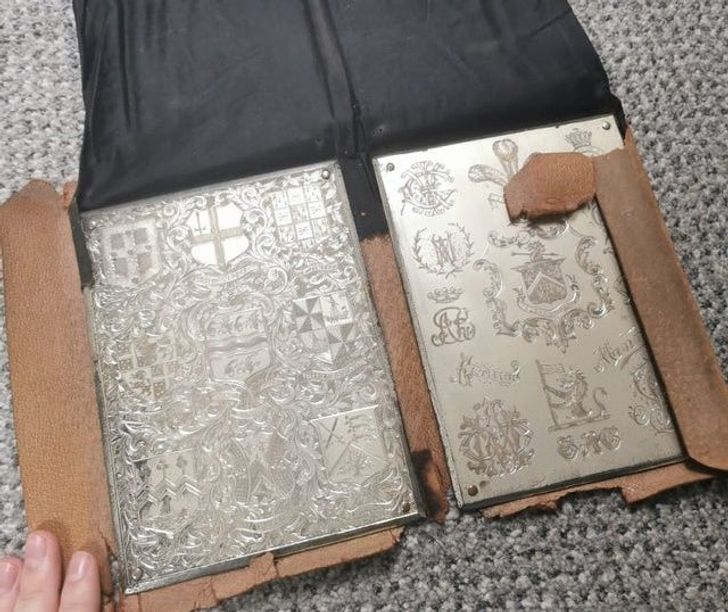 Answer: “It looks like an apprentice’s final piece before becoming an engraver.”

15. “Chest of drawers with no drawer sides? What is it for?” 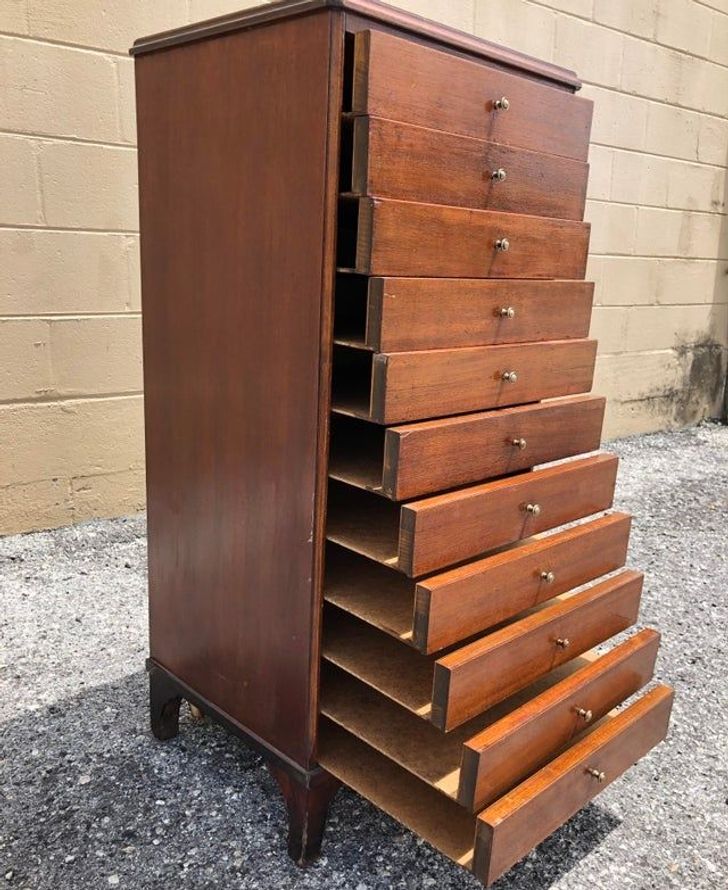 16. “I found this lightweight metal thing in a creek. Even Google doesn’t know what it is.” 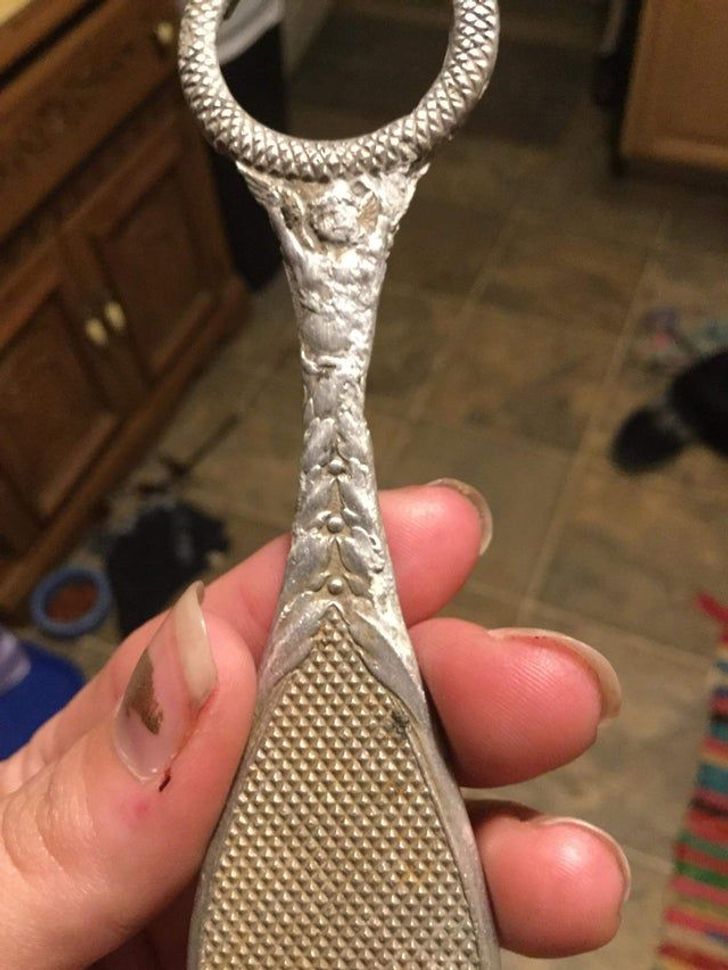 17. “I found this in my couch. Looks almost like a can opener, but I tried to open a can and it didn’t work. Thoughts?” 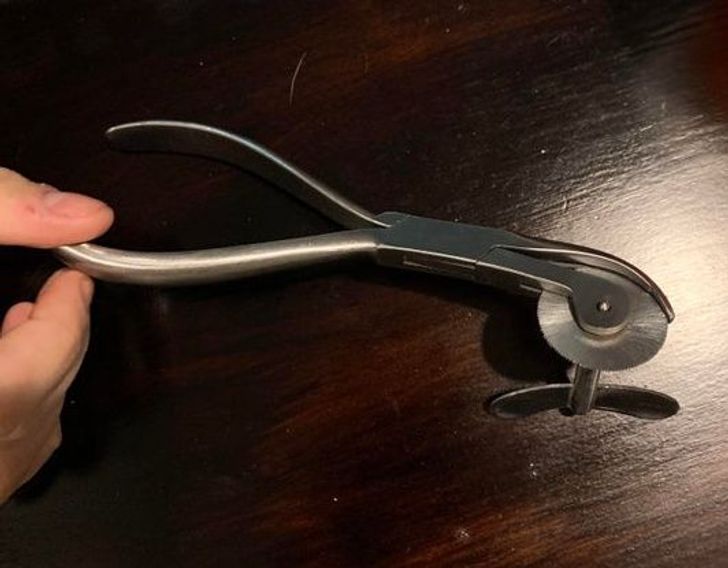 Answer: “This is a manual ring cutter. Most firehouses have these. If a ring gets stuck on your finger, they use this to cut it off without using power tools.”

18. “My grandfather told us to not remove this when renovating.” 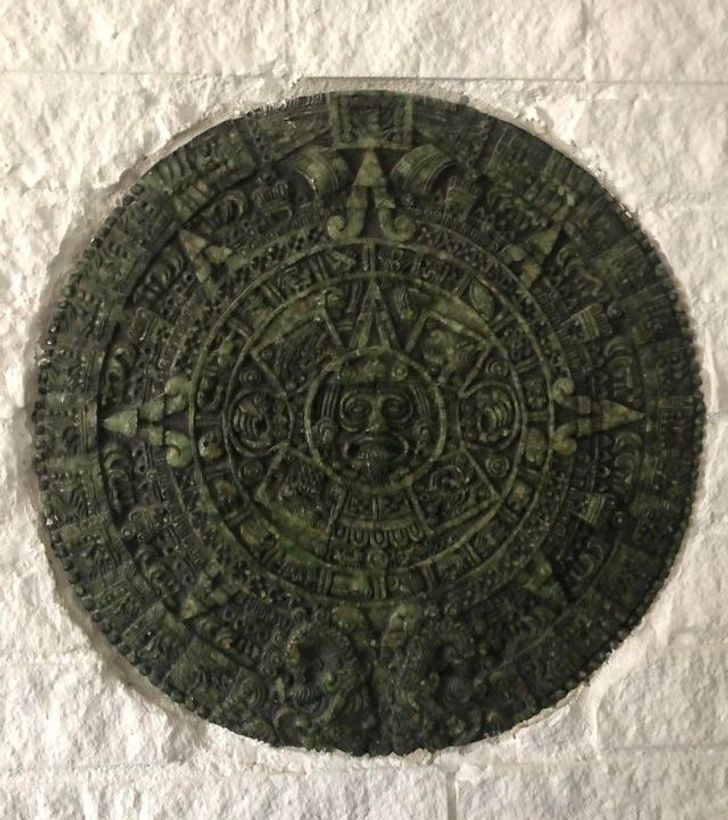 Answer: “It’s an Aztec calendar. Funny, I actually own one like this. It’s made of green mottled jade, mounted in a wood frame. About 18 inches across.”

19. “Miniature Christmas ornaments made of pewter. What for?” 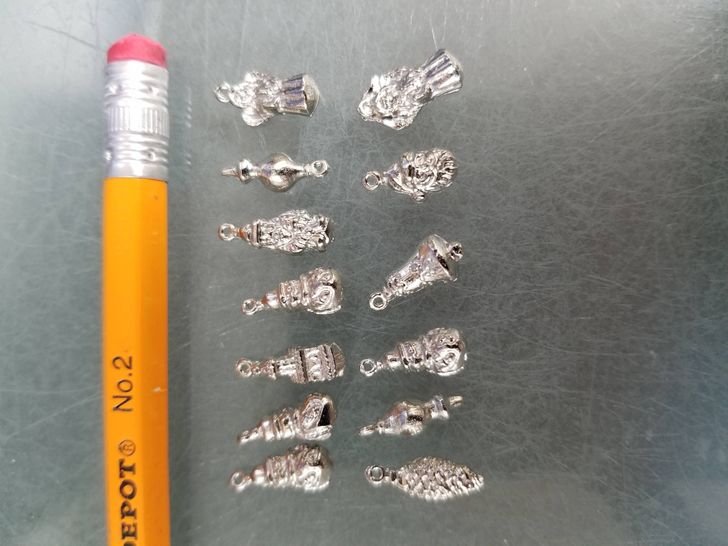 20. “What is this piece of playground equipment for? It seems like it must have a function other than to just lay on it.” 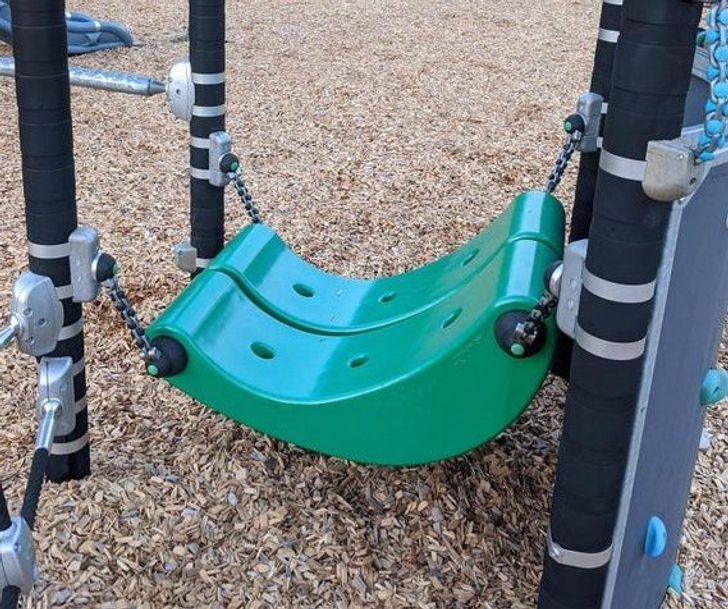 Answer: “Manufacturers are providing a lot more pieces that are accessible to children with limited mobility. While this may seem less interesting at first glance, imagine the benefits to children who’ve never been able to climb up to a slide or fire pole.”

21. “I saw these glass items at a yard sale. They aren’t doorknobs and some look like one solid piece.” 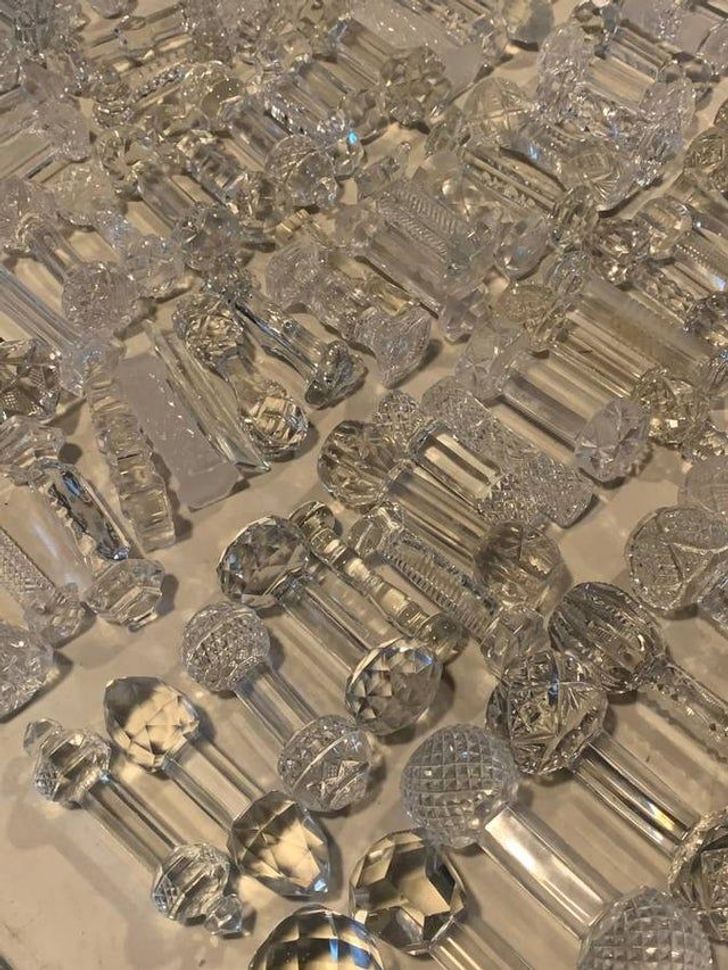 Answer: “These are knife rests.”

22. “A strange ceramic jar. What is this? It only has a side opening.” 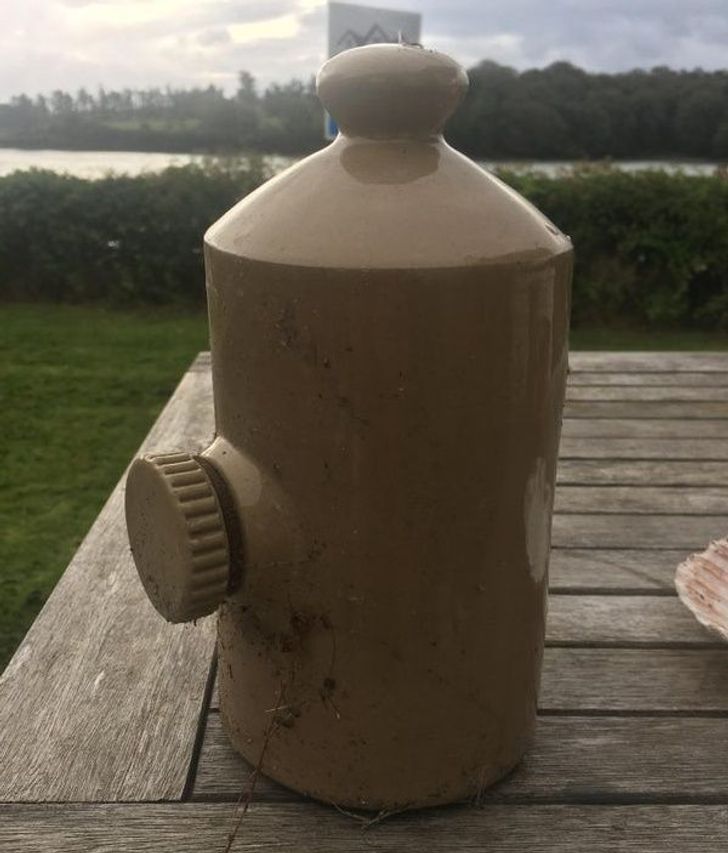 Answer: “It’s a stoneware bed warmer. Put some hot water in and pop it under your sheets.”

23. “It looks like a jump rope but it has 2 spring covered spikes connected with paracord.” 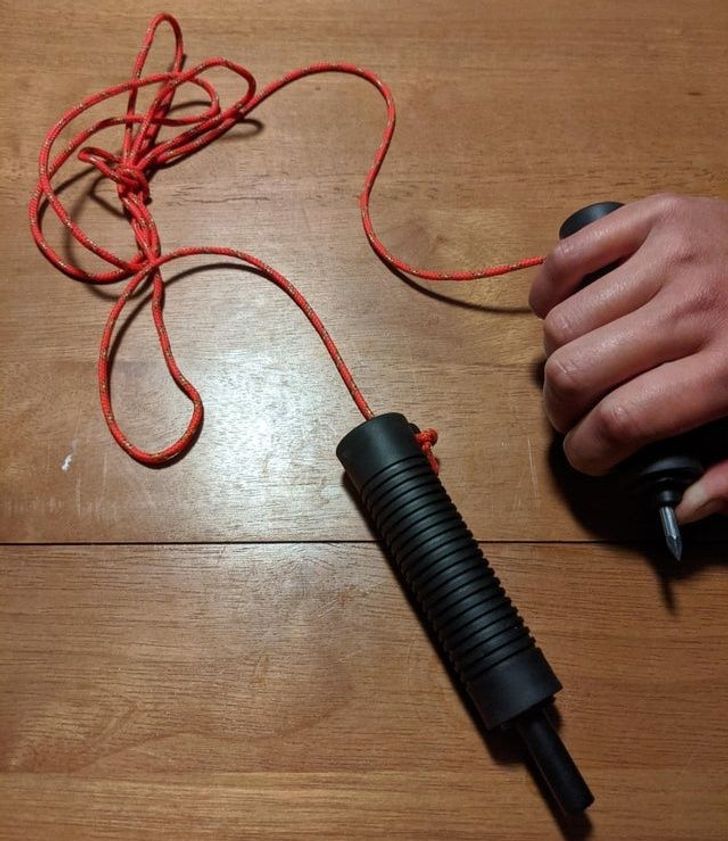 Answer: “They are rescue grips for things like ice fishing. Run the cord through your jacket sleeves and the spikes will be on hand if you fall through the ice.”

24. “What is this? I found it inside a Christmas package. It has a rubber like tube attached to it. The item clicks together as shown in the second picture.” 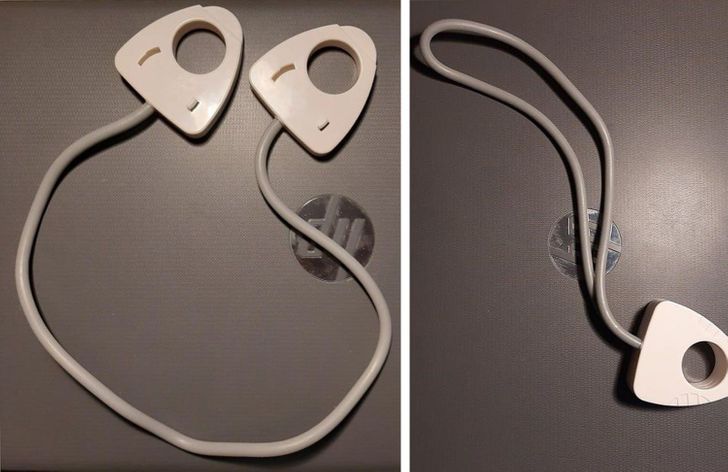 Answer: “It’s an exercising resistance band. You put your thumbs into the holes.”

25. “Someone gave this as a baby shower gift with no note on what it is.” 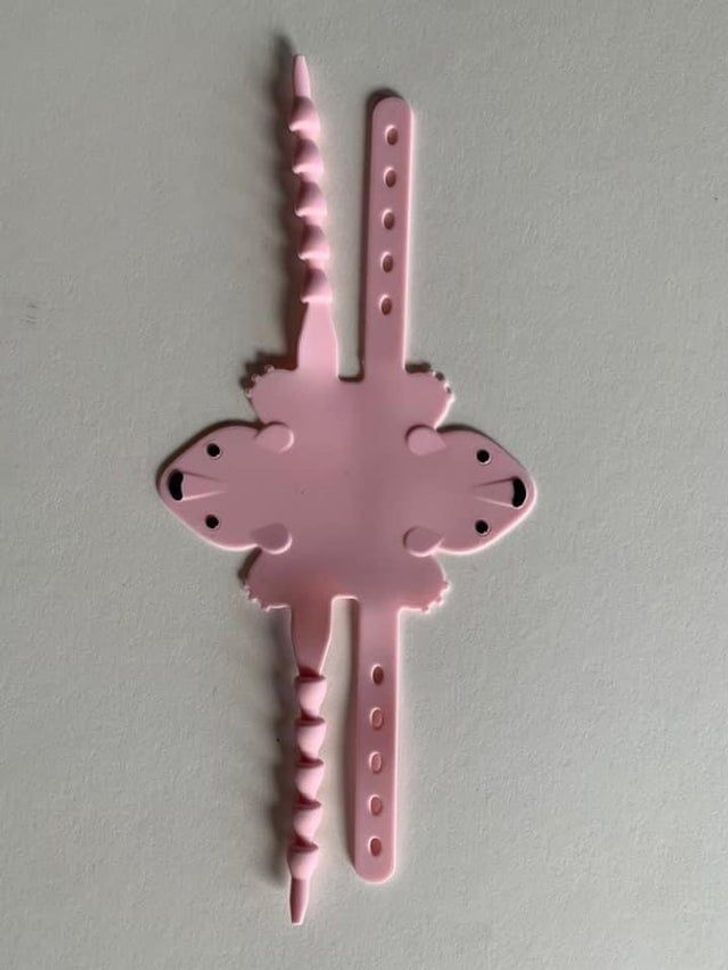 Answer: “It is a door silencer. It wraps around and covers the latch on a door so that it doesn’t latch and the rubber also makes the door open and close silently. The straps go around the doorknob on each side.”

26. “What is this brown bumpy thing on my Pringle?” 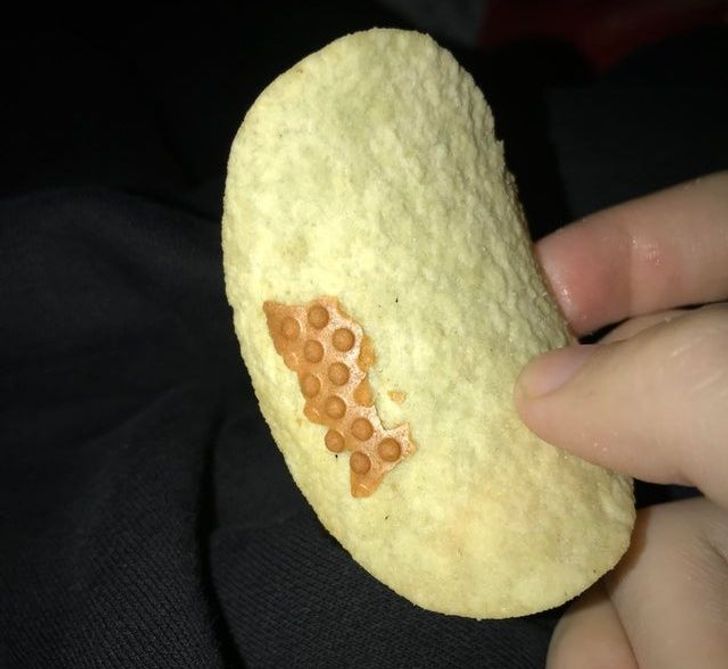 Answer: “This is the previous Pringle that didn’t completely make it out of the rolling mold. Pringles aren’t sliced potatoes, they are mashed potatoes pressed flat and cut like cookies. That’s a stuck previous Pringle.”

Bonus — the unsolved object: “It’s some kind of an old French kitchen utensil. What is it? What is it used for?” 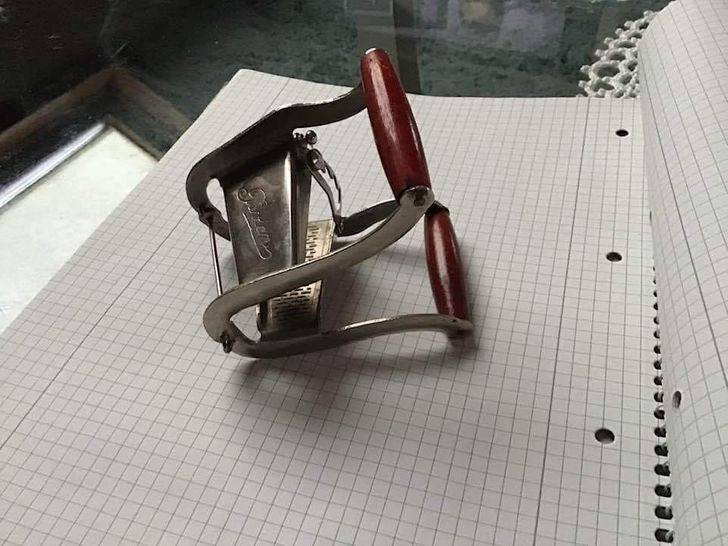 Please write your ideas in the comments below. You have a good chance at making the right guess.