There are many things out there that can leave us mystified. But, whether it’s an item you’ve found in the new house you bought or a shiny quirky object, don’t torture yourself trying to solve it solo because other internet users most certainly have the answer you are looking for.

When it comes to learning new things, we at Bright Side are always in the front row. And when we found out the purpose of these 22 mysterious objects, we realized that it would be a shame to not share them with you.

1. Found this piece of glass that changes colors depending on how you look at it. Where could this have come from? 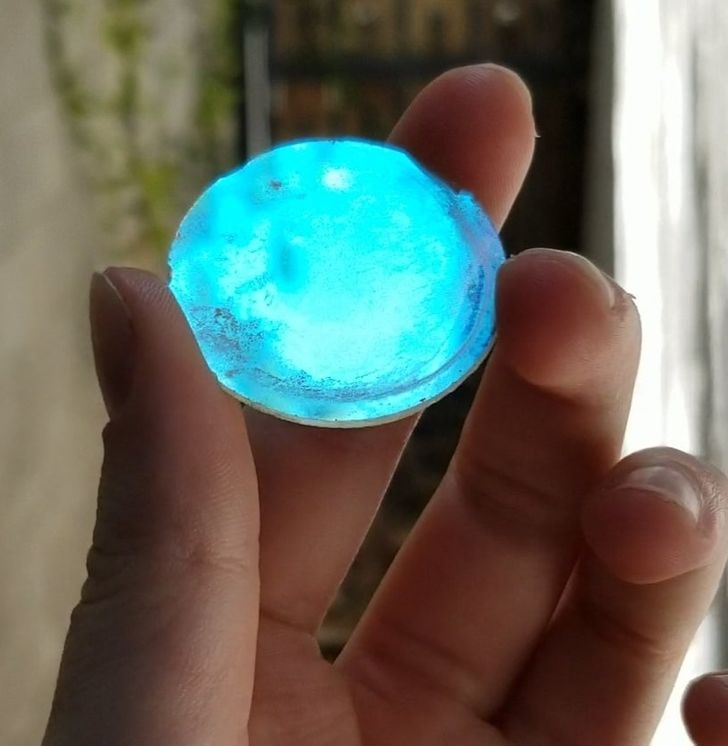 2. What is this small brass container on a stick (that opens)? It says Windsor Castle on it and it’s about palm-sized. 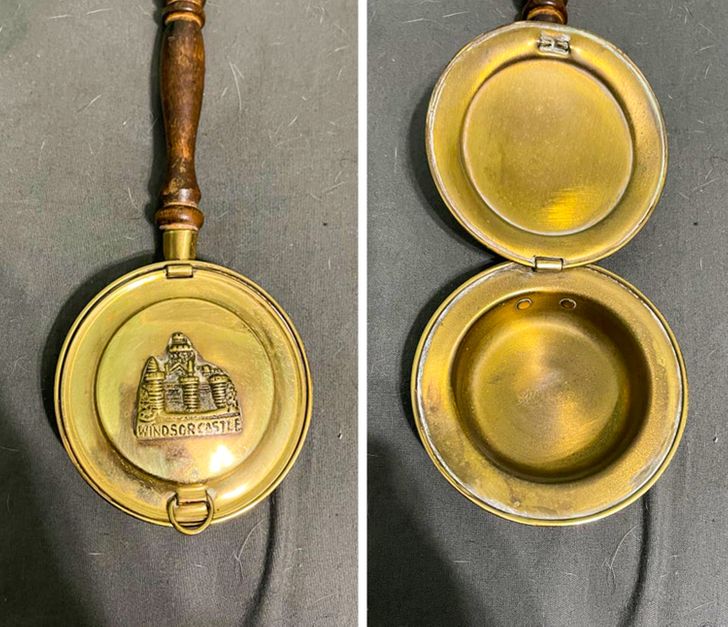 3. It’s a little bigger than an AA battery and weighs about the same. It has a tiny pinhole on the top and a combination with numbers 5 to 9. 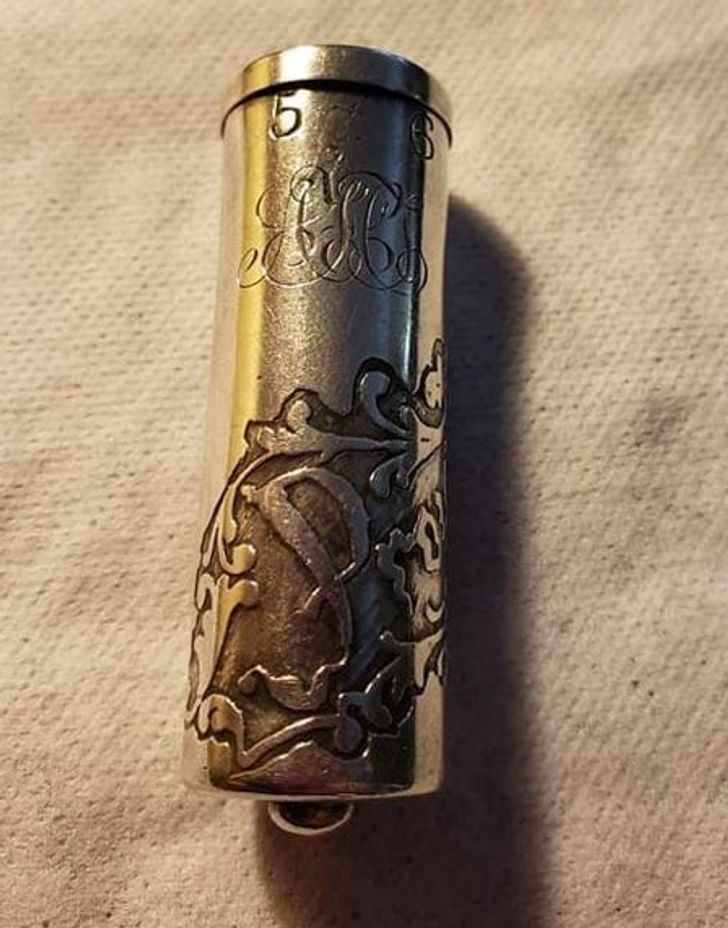 Answer: “It’s a needle case with little compartments inside. The top doesn’t come off — the numbers indicate the size of the needles, which you take in and out through the little hole.”

4. What is this truck with 5 massive spheres on the bed, and why does it drive past my house every morning around 8 AM? 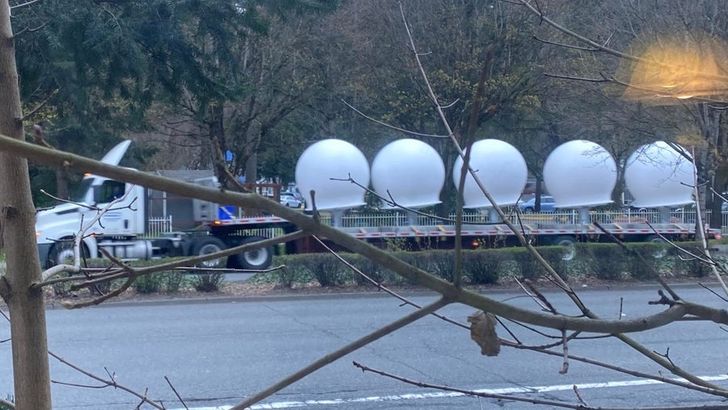 Answer: “They are StarLink ground station pods. They are ground uplinks for satellites, so when you connect through their satellites, your traffic passes through one of these and onto the internet.”

5. What is this green piece of plastic? My nephew found it in the water at the beach in Northern Michigan. It was made in China. 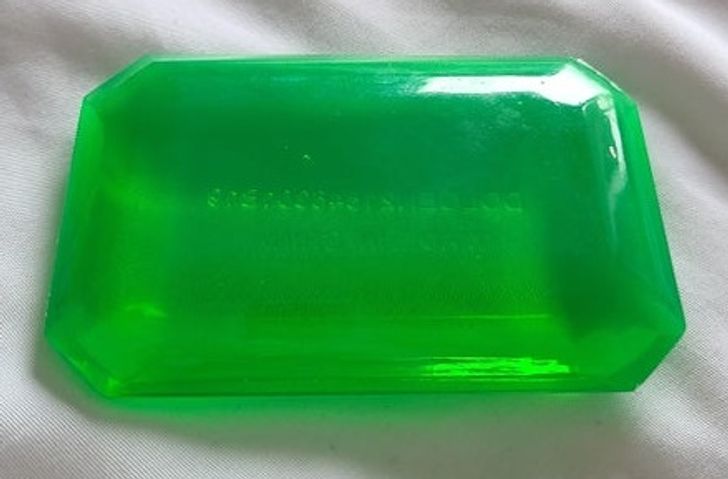 6. Can anyone identify what purpose this piece of furniture serves? 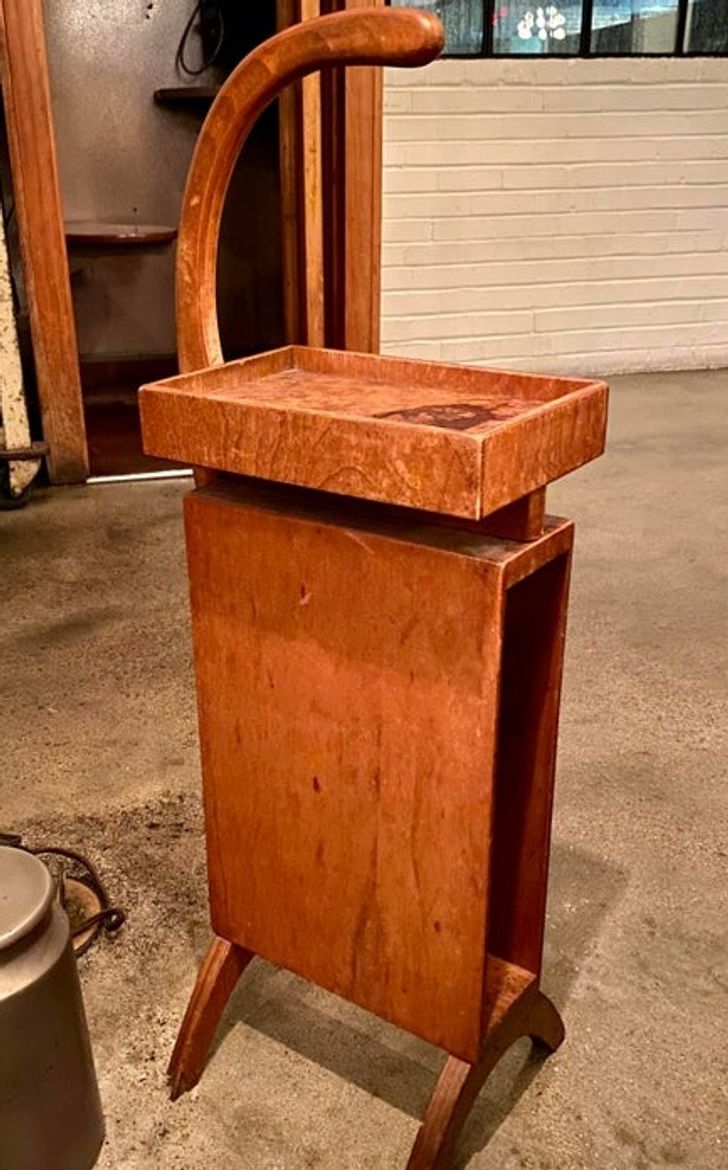 Answer: “It is a telephone stand. The handle is to move it around the room.”

7. What is this stand found on a farm in Missouri, USA? 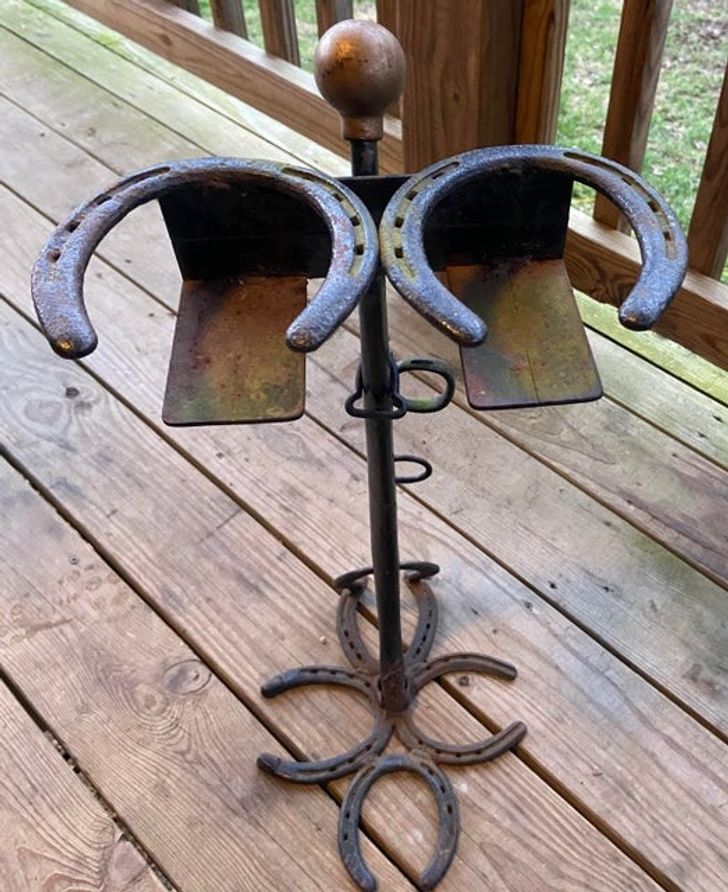 8. What is this little tray holder? It has a handle, it’s all made of metal, and the trays are in the shape of an “8” with 2 round holes each.

Answer: “They are bagel trays from a bread-making machine.”

9. Found deep inside of a recliner, it’s made of glass. The green part is plastic. 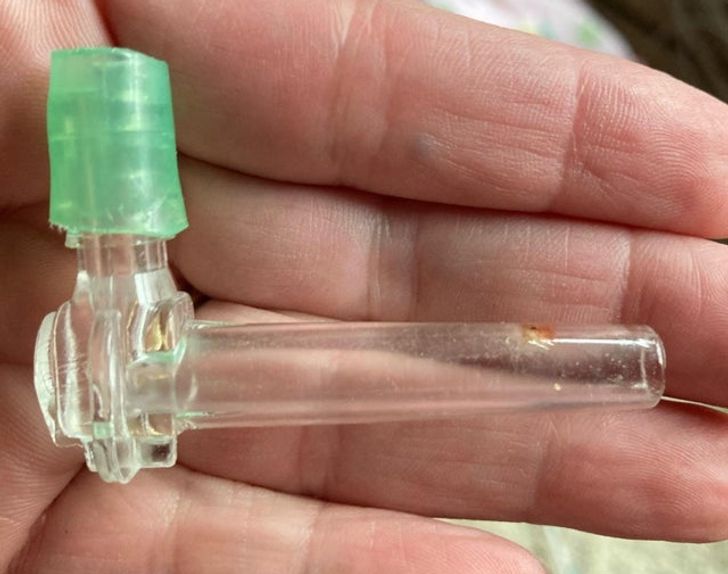 Answer: “That is a plastic maple sap spile used to tap trees and collect sap to make syrup. The green is a plastic hose. Modern sap collection uses these cheaper plastic taps and connects to a series of tubing running to a central sap collection point.”

10. Found a nicely made wooden box with a small clock in the lid. 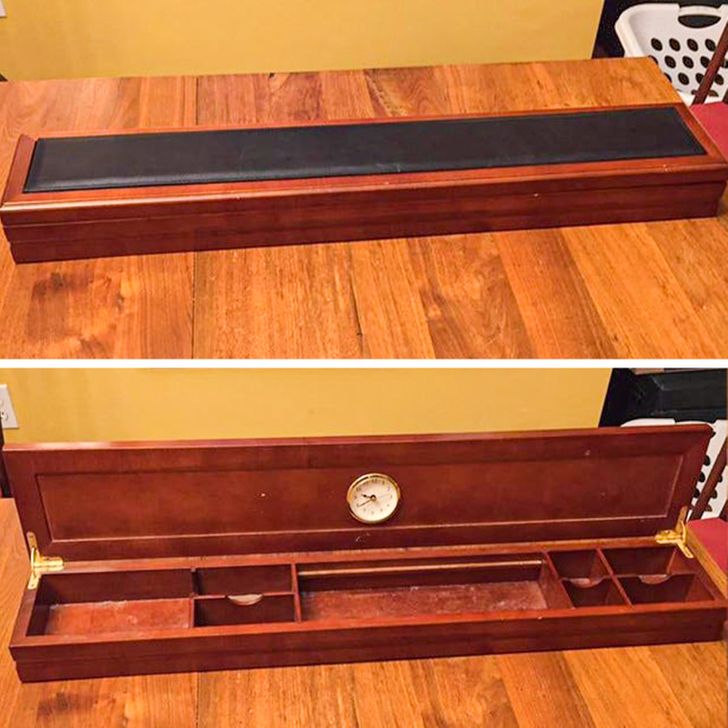 Answer: “It’s an old desk organization accessory. The smaller cubbies are sized for business cards and the larger for standard envelopes.” 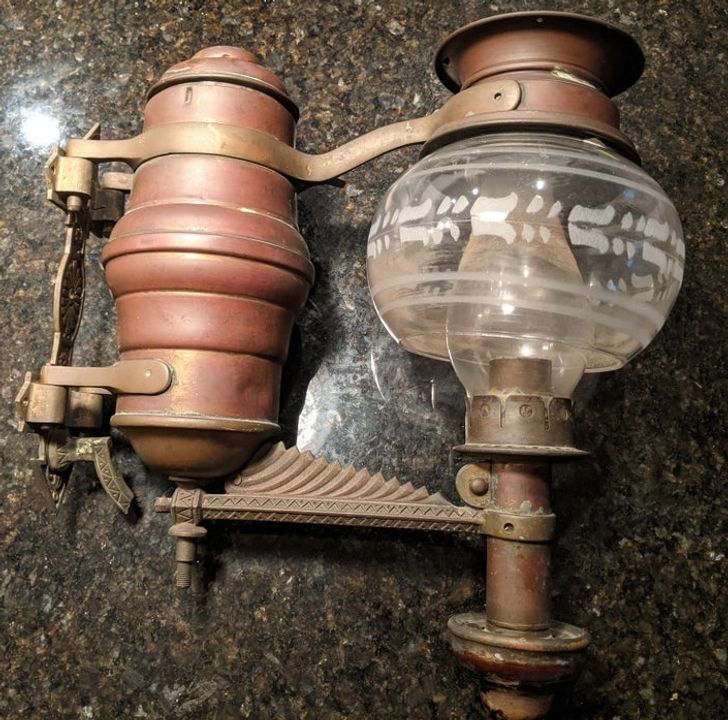 Answer: “This is known as a student oil lamp. The canister is an oil reservoir. By putting the reservoir on the side the lamp would balance better and it reduced the shadow that would have been cast by the bottom of the lamp if it maintained the more traditional design.”

12. My friend found it in a thrift store. It’s a ring with 2 handles and 2 rails. Possible kitchen utensil. 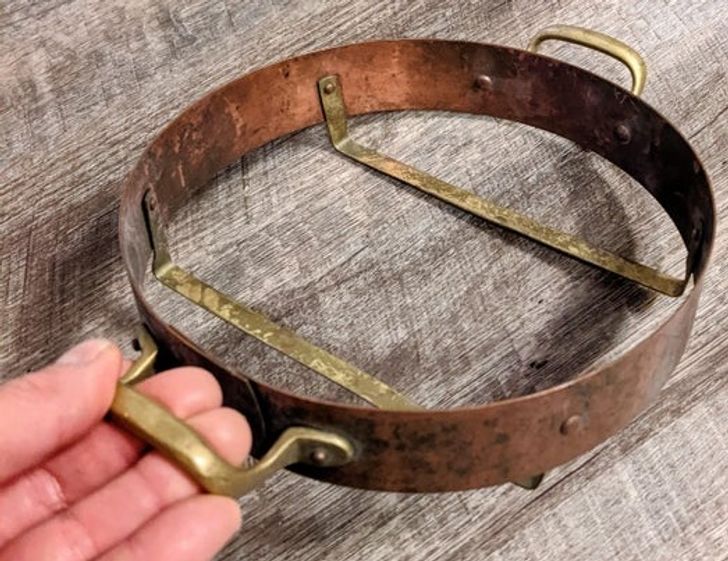 Answer: “It is the bottom (cradle) for carrying a stoneware crock.”

13. What is this tiny saucepan thing my husband inherited? It has a removable thing with holes around the edges. 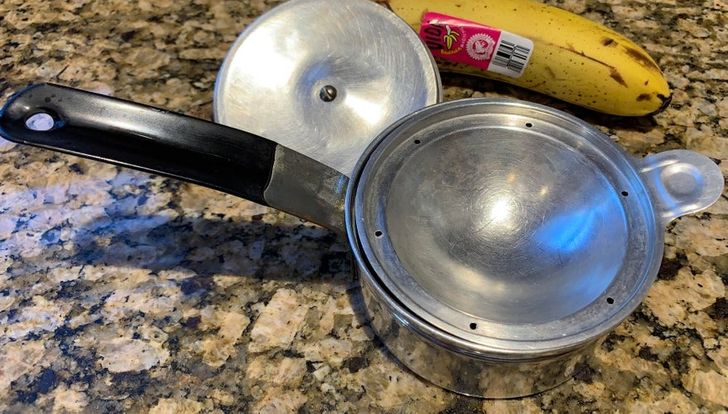 Answer: “It’s a single egg poacher. You put water in the bottom and an egg on top. It essentially poaches the egg.”

14. What is this silver tweezy thing with triangle notches? 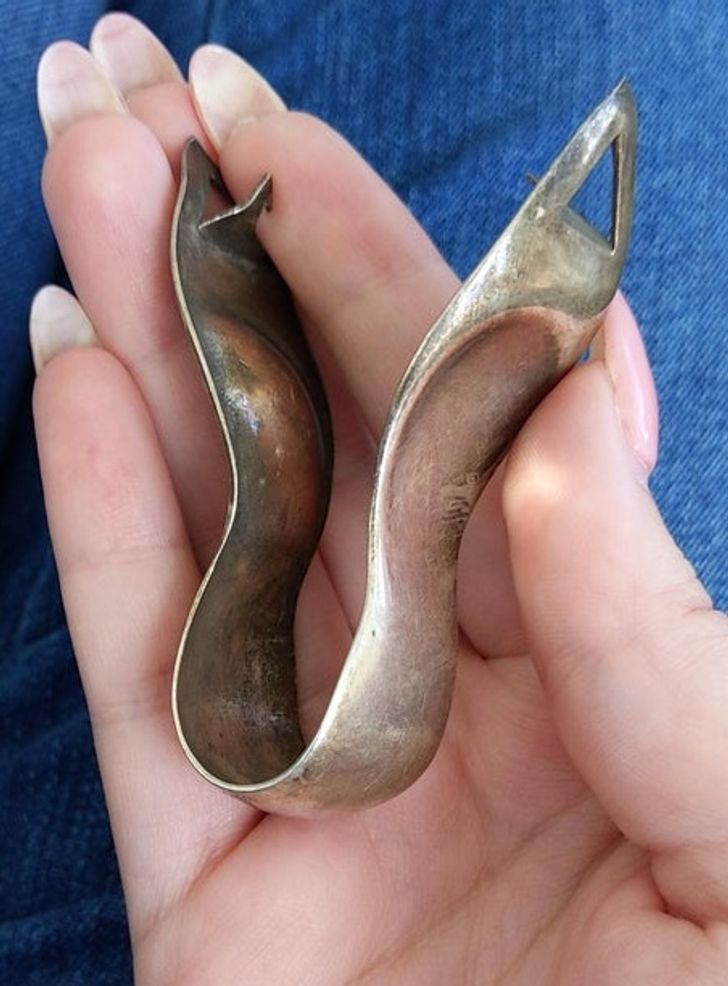 Answer: “For holding paper/documents together.”

15. The previous owner of the house left it in the garage. It’s a curved wooden slatted thing that pivots in the middle. 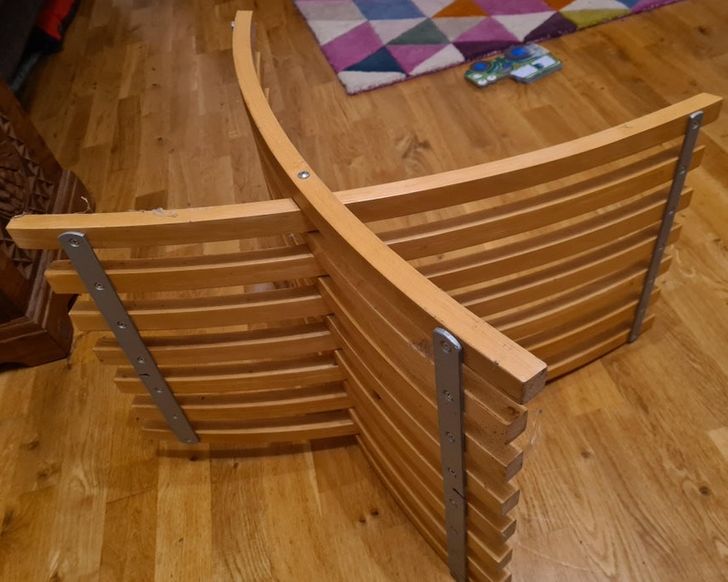 Answer: “You’ll see 2 slots in the steel bar on the bottom — a length of wire goes in there to hold it open at the right width, then a glass panel rests on the top to form the tabletop.”

16. Found in a library/art exchange. Appears to be a decorative copper dustpan. 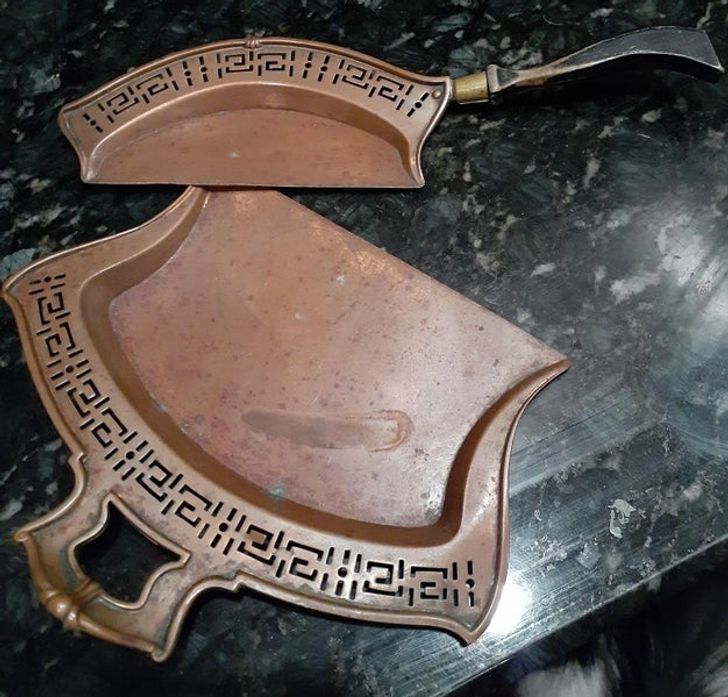 Answer: “For sweeping up crumbs off a table. Some call that style a ’silent butler.’”

17. Wooden box found at a thrift store. The area behind each keyhole is drilled out, but they don’t connect together behind the metal plate. 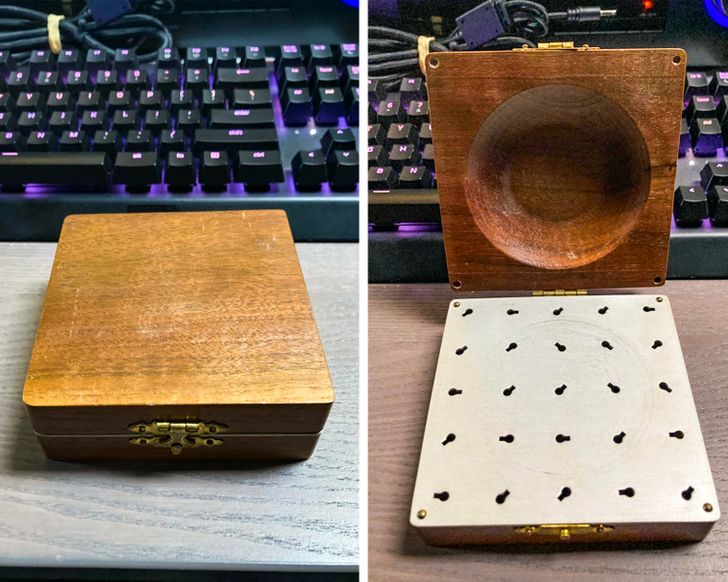 Answer: “This is apparently a manual dexterity evaluation test used in neuropsych to evaluate fine motor skills. The random keyholes are intentional to require different approaches to inserting the key and rotating it. There would have been 25 little metal keys stored in the wooden bowl part of the thing.” 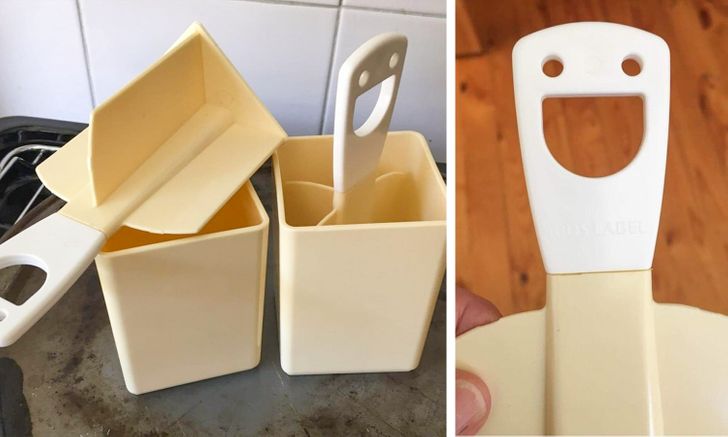 Answer: “It’s a pen holder for your desk and was probably sold at a cheap goods shop in Japan.”

19. What’s this unusual small silver box with a wing on a chain inside? 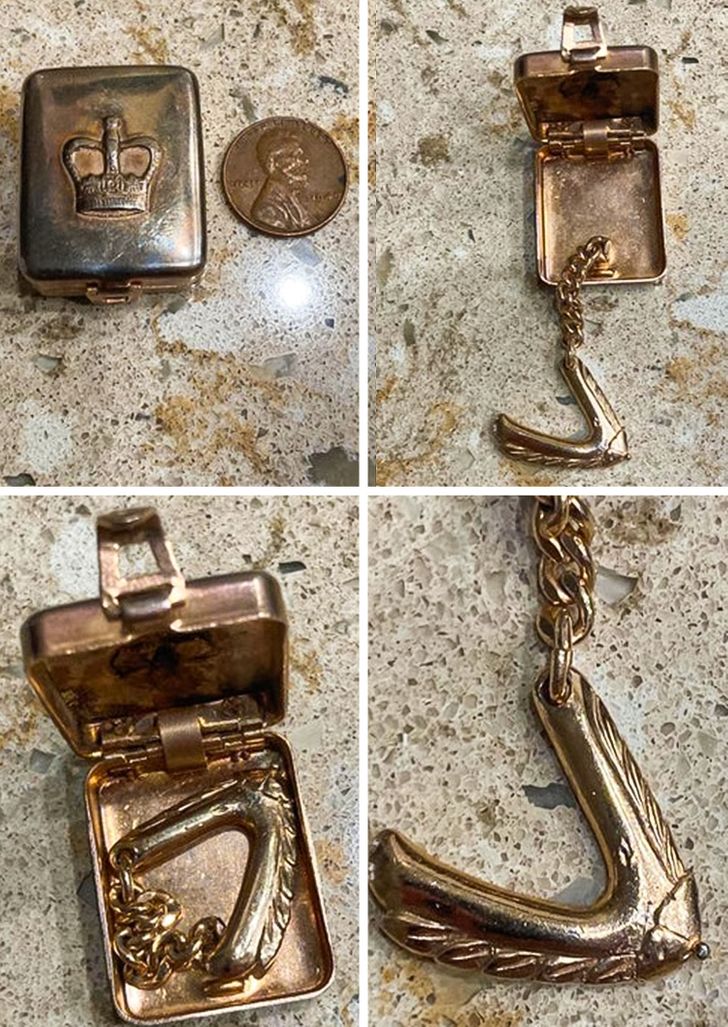 Answer: “It’s a purse hook. You hang it off of the table so your purse doesn’t touch the floor. The company that made this one is called Arbon and it’s from mid-century.”

20. This building was found in a country estate in Scotland. It’s about the size of a large shed and has small slits and platforms on the outside. 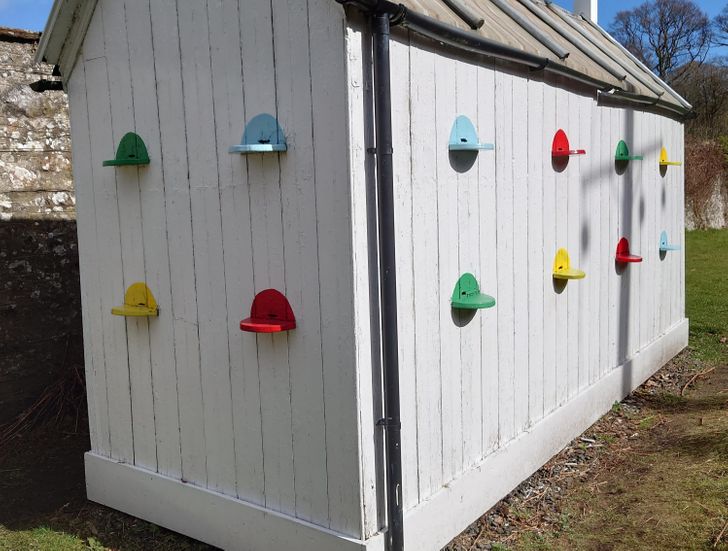 Answer: “It’s a ’Slovenian beehouse.’ It allows for multiple complete hives where the bees live, which I suppose is less like a hotel and more like condominiums.” 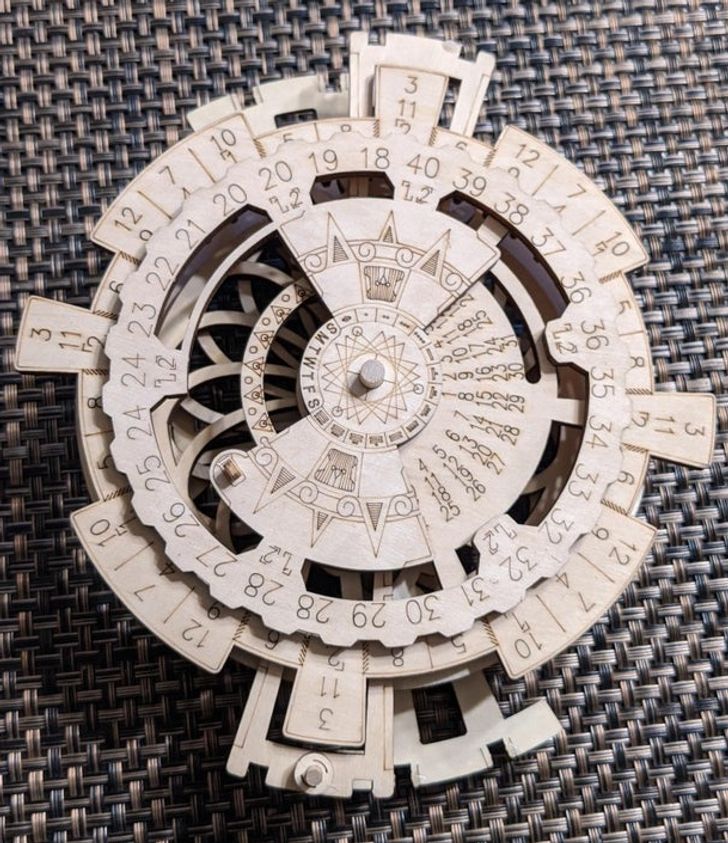 22. What is this ring my Uber driver would randomly click? 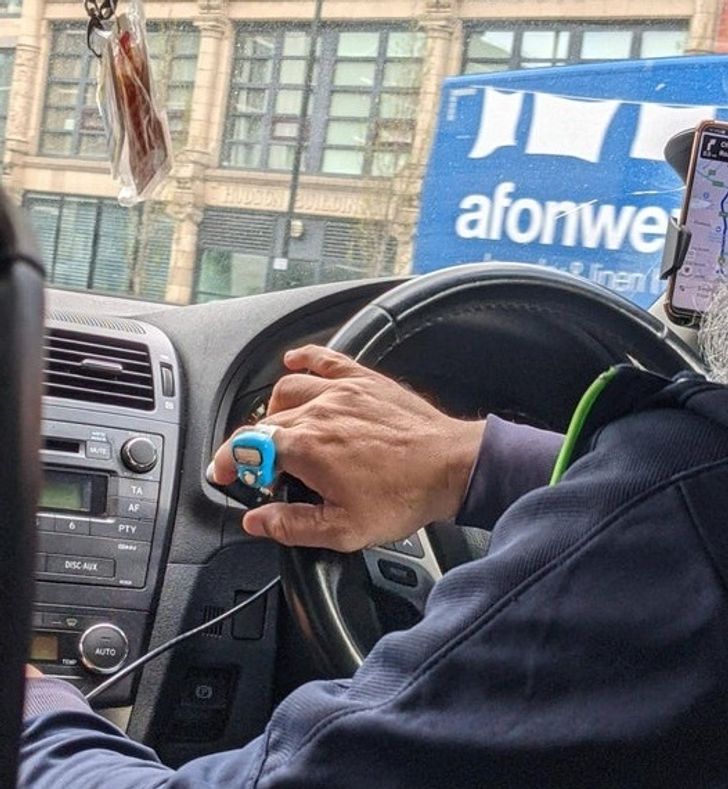 Which of these objects did you find most intriguing? Have you ever stumbled upon something that you didn’t know the use for?

Undoubtedly science has progressed a lot and we can acquire every feature that we want plus the independence of making your own life choices also becomes a catalyst for people to opt for plastic surgery.

But unfortunately, this trend and artificial beauty standards have really impacted negatively on the lifestyle of 90 percent of the population who is not a celebrity and feel bad about their looks after looking at the celebrities who have done numerous surgeries, makeup and photoshopping to look perfect.

We should focus on promoting natural beauty.

This comment is not meant to demean models like Pixee Fox. We really need to normalize acne-prone skin, natural facial features, cellulite, freckles, and every skin condition that is not horrible but somehow turned into imperfection by our society that works in the media and fashion industry. This trend and superiority in terms of fake beauty standards to measure every normal person is causing mental health traume to millions of people around the world who are facing low self esteem because they are constantly being compared to the phoshopeed and plastic community.