When Berry and Elsie Webber went on their honeymoon, all they hoped for was to spend some great time together. They were at ease knowing they left their kids in the hands of their caring aunt who would keep a close eye on them. However, they never imagined the aunt’s long time boyfriend would do something unimaginable. That crue| man named Andrew Nolan tortured and severely beaten 7-month-old Bobby, leaving him fighting for his life. The inc!dent took place while Elsie’s sister was out with the other kids.

The v!olent as$ault lasted for four hours. At the time he was rushed to the hospital, little Bobby had multiple skull fractures, a fracture to his vertebra, a bru!sed gen!talia, and b!te marks all over his tiny body.

Bobby was placed on life support, and the doctors’ prognosis were poor. They advised the parents to switch off the ventilator and let their son go.
The Webbers made a decision to take that advice, but once the life support was turned off, Bobby continued breathing on his own.

Was it a miracle? Definitely yes. Everyone was surprised and realized the brave little boy was willing to fight. 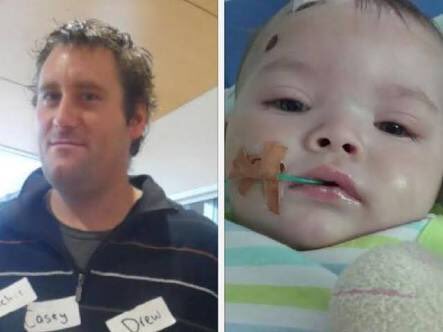 Today, four years after the horr!fic inc!dent, Bobby is still doing his best to live his life as best as he can. The !njuries he suffered from caused him to develop quadr!plegic cerebral pa|sy and vision impairment, but that doesn’t stop him from f!ghting.

“Absolutely everything that Bobby achieves blows my mind,” his mom told Daily Mail Australia.
Bobby ‘The Brave’ be*t the odds
“The hardest part is the constant position changing. He can’t sit up or crawl to get to where he wants to be, he relies on us to help him,” Elsie said.

“It never stops. As soon as Bobby wakes up, there is a lot of lifting involved. We give him his first round of medication and try to get him changed. We take him to the toilet because he’s toilet training at the moment. But he’s nearly completely toilet trained — which is amazing.”

“It is honestly one of his biggest achievements, and it has changed so much for us as a family. We were told all these things, he would never do any of this stuff but here he is doing it. He’s in remission from epilepsy, as well.”

Thankfully, Bobby is in remission from epilepsy and he’s involved in social activities. Currently, he attends Liberty Allstars cheer-leading every Sunday where he gets to bond and have fun with other kids with special abilities.
“It has given him the opportunity to be in a sport, and he doesn’t feel like he’s different,” Elise said.

“He doesn’t have stigma, and he gets so much joy from being at Liberty, going out into competitions and hearing everybody clap for something that he is proud of. It has been wonderful for awareness of his body.”

“He really responds so well to music and just the supportive environment for me, Bobby and Olivia is a blessing. There are people in that gym who were once complete strangers and are now family and friends.”Now, after 9 years, Emily and Jamie are perfectly healthy children. Doctors feared that what happened at birth could affect Jamie’s life, but they were wrong again.Bigi lives at an elite Calabasa, California neighborhood and attends Buckley School, a private school in Sherman Oaks, California.