Even days after it was broadcasted, Oprah Winfrey’s interview with Harry and Meghan is still a top news and is causing a stir on the social media.

Many of the revelations were shocking to say the least, and while some defend them, and others s|am them, I am sure there is not a single person who doesn’t have an opinion about everything that is going on within the Royal family.
According to CBS, the bombshell interview which made headlines was watched by staggering 17 million people. 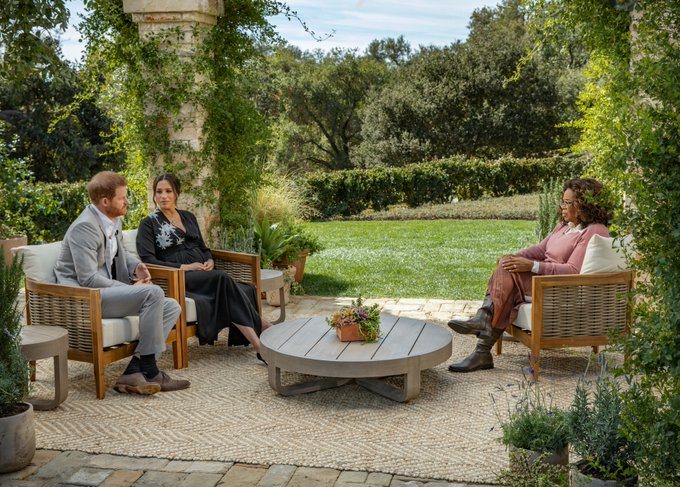 Among the rest, the couple spoke of the conversations by one of the senior royals about how dark the skin of Archie would be. Harry, however, said he would never reveal the name of that person as they wanted to protect the Royal family. “That conversation, I am never going to share. At the time it was awkward, I was a bit shocked,” he told Oprah.
Meghan spoke of her su!cidal thoughts and how she was not provided help as it would harm the Institution’s reputation.
But as literally the entire world has been obsessed with what the Duke and Duchess had to say, the conspiracy group QAnon is shifting the focus and is presenting this theory that the host was wearing an ankle monitor during the first tell-all interview with the former royals.

The popular QAnon channel We The Media, which operates on the messaging app Telegram, posted the question “Oprah ankle monitor?”

This was more than enough to start their 200,000 followers speaking and spreading the word. They claim she was trying to hid it with her boots.

WHY DOES OPRAH HAVE AN ANKLE TAG? PIC.TWITTER.COM/E1JIPJLGEK

“So obvious, first few minutes she was strategically keeping both her feet behind that little table then got comfortable or forgot about need to conceal it … she should fire the camera man,“ Telegram user Roxanne F. wrote. Another user, Stroud Mom, added: “At the furthest point away from the mouth, and where the microphone would pick up on any time she repositioned herself, in her seat? I don’t think so.