James Madison University on its official Instagram account shared a video featuring a student not only decrying the verdict in the Kyle Rittenhouse case but also accusing Rittenhouse of “murdering … two beautiful black lives.”

Which is quite a feat considering the pair he fatally shot in self defense amid rioting in Kenosha, Wisconsin, last year — Joseph Rosenbaum and Anthony Huber — were as white as Rittenhouse.

What are the details?

The video as seen on Ramirez’s Twitter page begins with what appears to be an introduction of a student documentary about a “day in the life of Deaquan Nichols.” Nichols, a student, narrates the video.

The clip cuts to Nichols decrying last week’s Rittenhouse verdict — not guilty on all five counts against him.

“All the protesting, everything we went through in 2020, we really think would make a change, but clearly it doesn’t,” Nichols said. “We scream ‘Black Lives Matter,’ but it doesn’t matter enough for these people who are in power — the jury, the judge, anybody — to charge this man with murdering and taking away two beautiful black lives at the ripe ages of 26 and 36. It’s disgusting.” 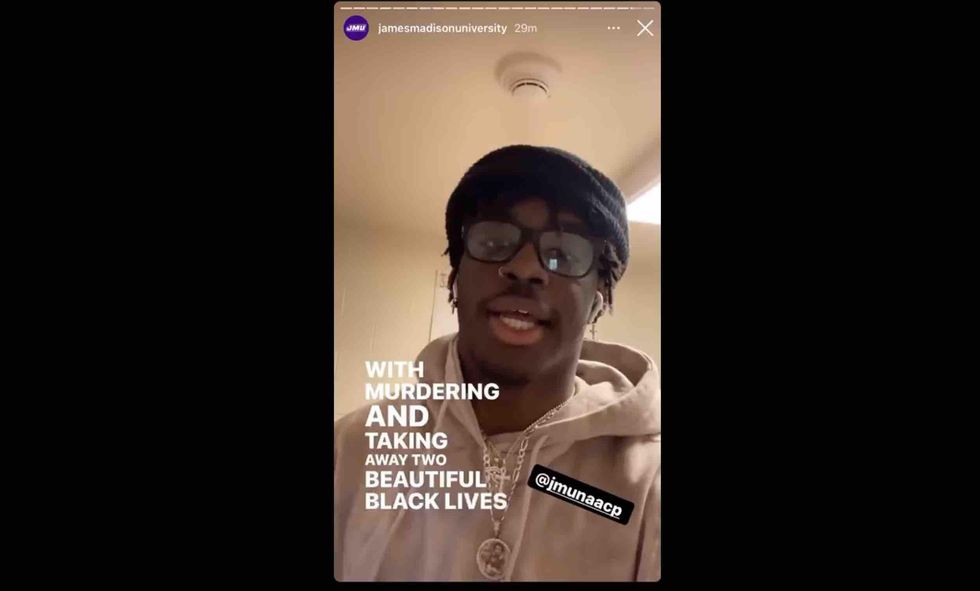 Nichols doesn’t mention the names of Huber and Rosenbaum, but they were the only two people Rittenhouse fatally shot, and they were 26 and 36, respectively. Rittenhouse also shot and wounded Gaige Grosskreutz, who testified he pointed a gun at Rittenhouse’s head before Rittenhouse shot him in the right bicep. Grosskreutz also is white.

This was sent to me by a @JMU alum. It is a now deleted video from JMU’s Official IG account that not only criticizes Rittenhouse’s innocent verdict, but mischaracterizes the facts of the case, stating that “two beautiful black lives” were killed, which is false. 1/2 pic.twitter.com/EoJOJr0CUH

Ramirez wrote in her Twitter posts that she received the clip from a JMU alum and that the clip is “now deleted.” She added that JMU “is a publicly funded university that is now pushing political propaganda and misinformation from their social media accounts” and that the school’s “actions are unethical, as Kyle Rittenhouse was found innocent, and dangerous, as the post pushes false info that could lead to violence.”

Ramirez added to Fox News that it was “egregious” of JMU to allow the video which broadcasted “blatant misinformation” on the school’s Instagram platform.

What did James Madison U. have to say?

A JMU spokeswoman told Fox News that the video in question was part of its “student takeovers” on social media platforms that are “an opportunity for our audiences to learn about student activities and research.”

College spokeswoman Mary-Hope Vass added to the cable network that “one of yesterday’s takeovers went into the personal opinion and viewpoints of a student, which are not necessarily reflective of the university. The video expressing this opinion was removed from the university’s social media account.”

The Rittenhouse verdict led to other controversial pronouncements from James Madison University.

“It’s hard to focus on science if you’re worried you might get deported or if your human rights depend on the outcome of an election. The fight for justice *is* a fight for science,” the department added.

“Yes, we are exhausted, but some people do not have the privilege of bowing out,” the department added in another tweet. “So, we must be relentless in our pursuit of a just and equitable society.”

The department also shared a video from Peacock channel host Amber Ruffin in which she claimed the Rittenhouse not guilty verdict shows that “the judicial system [is] blatantly and obviously stacked against people of color,” Fox News added.

In case you needed to be reminded of this after today's verdict. pic.twitter.com/CufF7l3vtw

Ramirez fired back against the tweets, telling the cable network that “to see that the school’s chemistry department would then double down with more politicized rhetoric is beyond the pale. In their posts they say ‘it’s hard to focus on chemistry,’ but that is literally their job and what parents are paying thousands of dollars in tuition fees expect them to do. This is why I’ve been so adamant that we need to make school about education again. We should be teaching students how to think critically, not what to think politically.”