With an impressive career in sports journalism, Diletta Leotta is a highly successful and accomplished woman, with a glamorous lifestyle many would envy.

However, the 28-year-old Italian presenter has also had to deal with her fair share of s*xism; a frustrating issue within an industry where women are still very much in the minority.

This was illustrated at a recent football match at the Stadio San Paolo, when Leotta was forced to deal with crowds chanting at her to take her top off. The same charming request was not asked of her male colleagues.

You can watch the inc!dent for yourself below:

While preparing to cover Napoli’s game against Brescia, the former weather presenter – who has 4.6 million followers on Instagram – was welcomed by shouts from a loud and raucous section of the Stadio San Paolo crowd.

The football fans could be heard chanting ‘fuori le tette’, which roughly translates as the far less poetic sounding ‘get your tits out’.

With her trademark confidence, Leotta could be seen smiling brightly up at the chanting crowd, before wagging her finger and giving them a very firm thumbs down.

Fans appeared to be thrilled by her rejection; laughing enthusiastically as a beaming Leotta gave them a cheery wave. 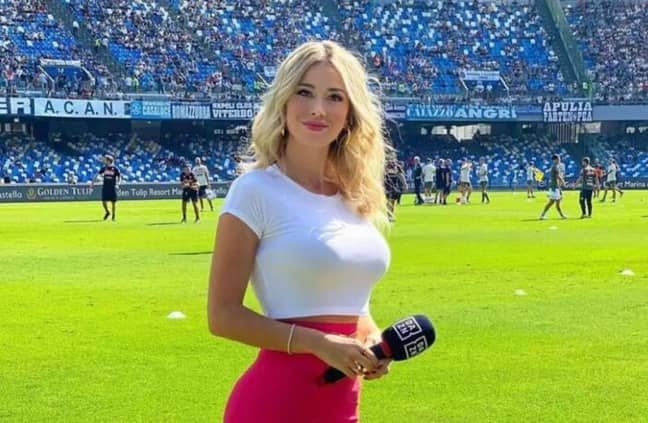 Many who were not in attendance at the match have applauded Leotta’s response; admiring how she showed a witty, ballsy attitude during what could well have been an intimidating and even disheartening situation.

However, this on-camera moment is merely the tip of the iceberg for many women who are struggling to get ahead in the male dominated field of sports reporting. And not every s*xist inc!dent is made quite so public.

In February 2019, sports presenter Jake Humphrey spoke out about the ‘unbelievable s*xism’ faced by female football pundits. Drawing from his own experience in the field, Humphrey argued women presenters are put under the sort of excessive scrutiny their male counterparts would never have to deal with.

As reported by iNews, Humphrey accused the industry of ‘pretending everything’s fine’:

The sexism that spews out on social media whenever a female pundit appears on TV is a disgrace. Tonight on #PLTonight, with @rach_brown1 we call it out. Any form of discrimination is wrong…football is for everyone, it should be empowering our daughters as well as our sons ❤️⚽️ pic.twitter.com/BdNObyun3P

Even in our supposedly modern and forward thinking era, women pundits are still all too often regarded as novelties in the world of sport, with their looks regularly becoming the public focus.

In 2007, Jacqui Oatley became the first female commentator on Match of the Day; her employment famously marked by ridiculous tabloid headlines such as ‘From Motty to Totty’. Her long and esteemed career in football commentary received far less emphasis.

In recent years, we have seen similarly depre&sing attitudes towards female sports broadcasters. In 2018, Vicky Sparks became the very first female World Cup commentator, only to be subjected to dismally predictable abu&e from internet trolls who dismissed her employment as mere ‘tokenism’.

It didn’t seem to matter that Sparks was a highly qualified journalist and football commentator. Her gender and supposedly ‘high’ (read, female) voice was enough to render her incapable in the eyes of other, far less knowledgeable, individuals.

Let’s face it, while its certainly admirable that Leotta could handle s*xist chanting with grace and humour, she really shouldn’t have to.