Nobody is going to argue with the fact that pets are a never-ending source of joy and fun. They often make us happy with the hilarious things they do, their awkwardness, and their carelessness. However, food, sleep, and fun are not the only things that they care about. And this point is proven by the stories where they were extremely smart when they needed to achieve their goals.

We at Gain Tip realized a long time ago that we should never underestimate animals. You will also believe this after you read this compilation of stories about their loyalty, cunning, and intelligent minds.

My Asian shepherd is my pride and joy. This is because when he was a puppy, he dragged a child from a sleigh. The mother didn’t notice, but as she was crossing the road, this guy on a bike slipped and crashed into the empty sleigh. I can’t imagine what the mother felt until the people around her started saying that the kid was alive, and had been saved by the dog. The puppy got surprised when everyone started kissing and hugging him along with the child. And the child was extremely lucky, otherwise, how do you explain this? © Overheard / VK

The first Christmas we had our cat she, saw us handing out presents and opening them and abruptly ran off. About twenty minutes later she comes back with a dead bird and drops it in the present pile. She definitely thought that that counts, right? © Zagfros / Reddit

When I was 3 or 4 years old, my mom would take me and my dog for a walk. Sometimes, she left me to wait near a store she went in and ordered the dog to guard me. My mother was at a bakery and several minutes later she ran out because I was crying. She asked me what happened and I told her that I peed myself. She asked me why I didn’t go into the bushes and I said that the dog wouldn’t let me because she was told to guard me. © Overheard / VK

My cat yawned, so I stuck a finger in his mouth. He sort of stared at me curiously as he shut his mouth, but didn’t bite down hard. A few minutes later, he’s sitting on my chest and I yawn. He proceeds to put his whole paw in my mouth. © ihavespaceballs / Reddit 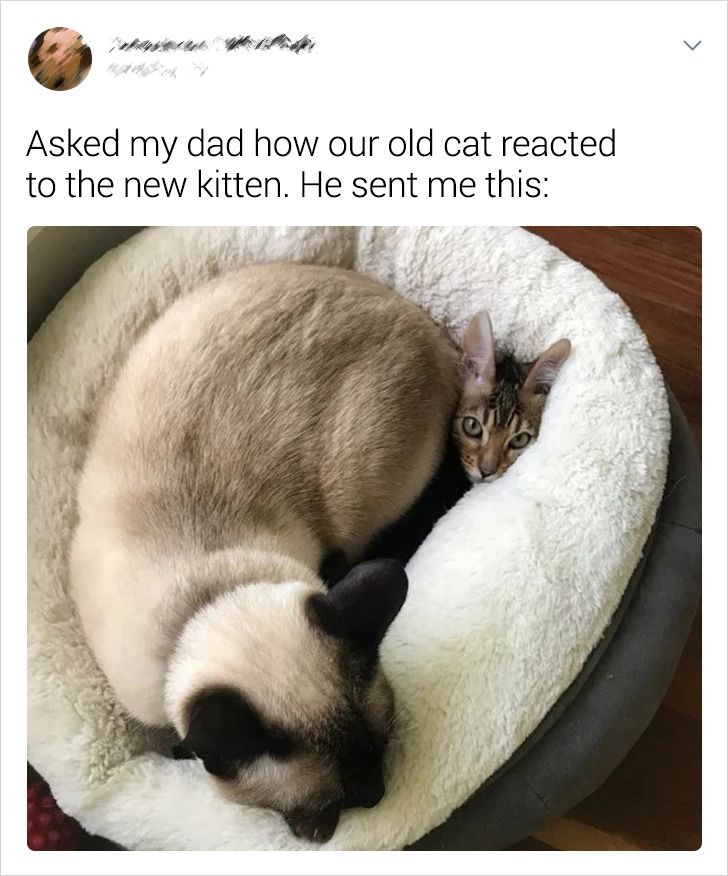 My pitbull is 6 years old. She is the kindest creature in the world, she doesn’t bark, she probably thinks she is a cat. A couple of years ago in our town, a new regulation was adopted that “dangerous” dog breeds had to be muzzled while walking on the street. In fact, I agree with this. But my Freya got really offended and after every walk, she wouldn’t even look at me, she refused to eat, and she started losing weight. As a joke, my brother presented her with a muzzle that was purple with chamomile flowers on it, instead of the black one she wore and Freya absolutely loved it! She wags her tail after every walk and plays and eats! Girls are girls no matter what, right?! © Overheard / VK

I was going home on the subway late one evening and this guy’s cat jumped out of his hands. The owner was calling him but the cat couldn’t hear where he was — it was really noisy. Then, I heard a heartbreaking scream, “Please, keep silent. I want to catch my cat! He is my best friend!” I had never heard such silence in the metro. Something like 100 people just got silent and the scared cat ran to his owner and jumped back into his hands. © Overheard / VK

Once, my father and his friends went to the river with one tent for everyone and they took my father’s dog. In the evening, my dad decided to go to sleep first, he went to the tent and fell asleep. In the morning, he looked around and didn’t see anyone else in the tent. He got pretty scared, got out of the tent, and saw his friends that were sleeping next to each other around the burning fire. It turned out that his loyal dog wouldn’t let anyone inside the tent where my father was resting. © Overheard / VK

My cat knows that old grocery bags are what I scoop his excrement into, so when I slip up and forget to clean his litter box, he drags one in there to let me know. © Speezy183 / Reddit 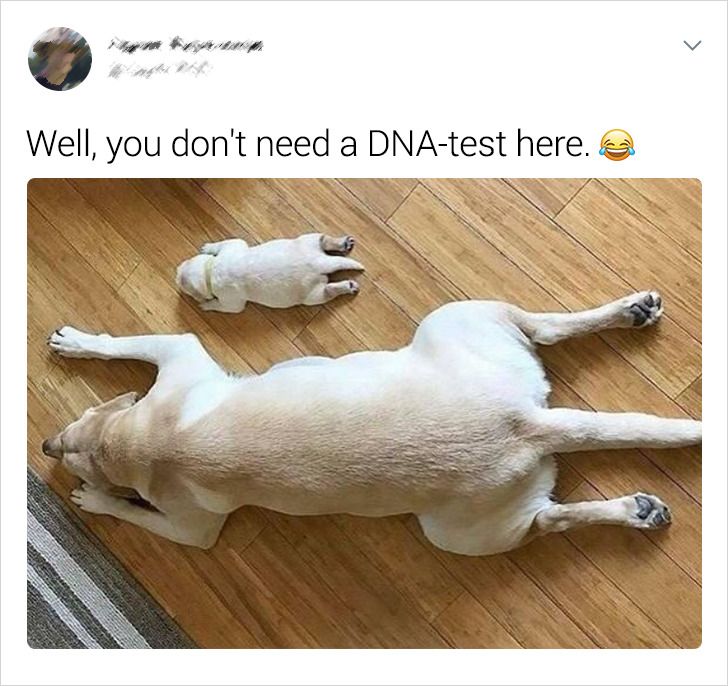 I live with my boyfriend and he brought home a kitten about 5 months ago. A while ago, we had a fight, I collected my stuff, and went to my friend’s to stay and look for a different apartment. 4 days later, my boyfriend begged me to come back home and told me, “Come back, we miss you. George keeps sniffing your pillow and screaming and looking for you.” I returned back home. And now George follows me everywhere. Recently, I heard my boyfriend telling to the cat, “Why are you lying here? She is leaving for work soon.” And then I see the cat running to me, almost falling, and bumping into obstacles trying to prevent me from leaving home. © Overheard / VK

Our family’s border collie would ring the doorbell when he wanted to come in. He was never trained to do it. My dad figures he learned it from my childhood friends who came over to invite me out to play. © KinkedThinking / Reddit

My mom works in a hospital. After a nightshift, she came home and found that she had forgotten her phone at work. She had no other alarm clock in the apartment. She went to feed the cat and said, “Hey, if I don’t get up at 7 AM, you are going to be in big trouble.” At 6:30 AM, the cat was biting my mother’s legs, but she continued to sleep. And then she felt the cat’s wet nose and her tongue on her cheek. She opened her eyes and looked at the clock — it was 7:05 AM. © Overheard / VK 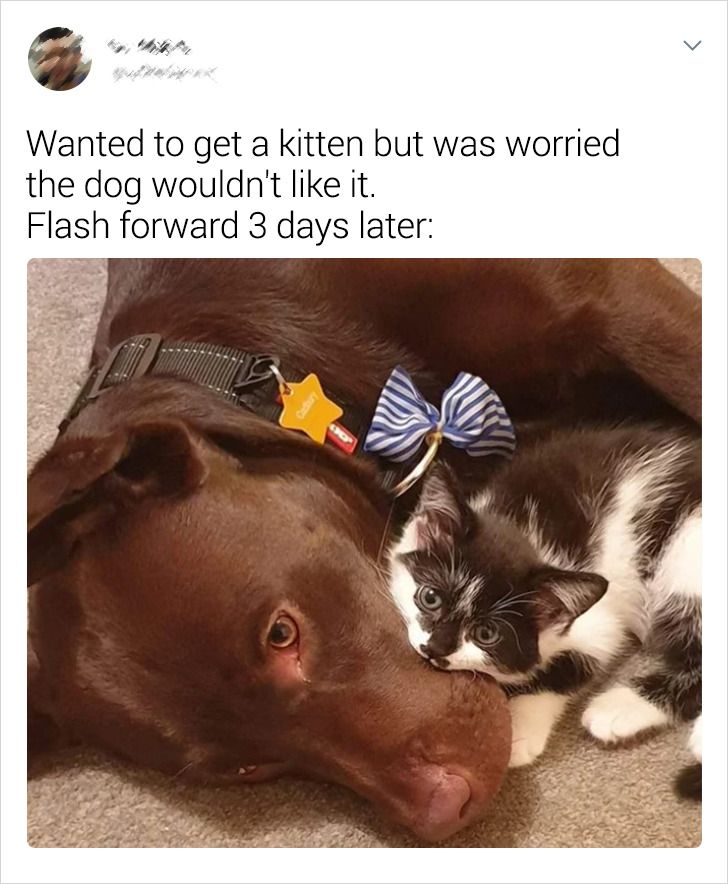 I am diabetic and one night I fell on my carpet from weakness and disorientation. My beloved dog, who now rests in Heaven, brought my emergency kit from my bathroom counter so I could take my medication. Just writing this post brought tears to my eyes. I will always remember you, Bumper. © nando1969 / Reddit

This happened to a woman I know. Their cat stopped playing with her husband and even started to avoid him. She asked him if he kicked, or did something to the cat but her husband said he didn’t. Later, the cat started pooping on the bed exactly where her husband slept. She had no idea why until she found out that her husband had a mistress! He didn’t even try to save the family. They got divorced pretty fast and the cat felt everything and tried to show who the betrayer was! © Overheard / VK

When my mom was small, her parents had a small dog whose name was Kuchum. The dog was a real thief, a literal kleptomaniac, and he had another quirk: one of his paws was shorter than others (it was shot by hunters when he was a puppy). It was a pretty rough time and my family didn’t have enough money, even for food. But there was something they needed to buy in a nearby town where everyone drove. So, this Kuchum would constantly bring something home: fish, cans, bread, milk. And once, he brought my grandfather a sneaker. My grandpa looked at it and said, “Why did you bring just one? Get me the second one!” 2 days later, he got the second one. © Overheard / VK

Tell us about the times when your pets amazed you with their intelligence.