From time to time, all of us have to write a résumé, look through job ads, and attend interviews. Needless to say, meetings with potential employers don’t always go smoothly.

Today, Gain Tip offers you a collection of amusing stories from the world of personnel recruiters. We just hope you won’t find these situations too familiar! 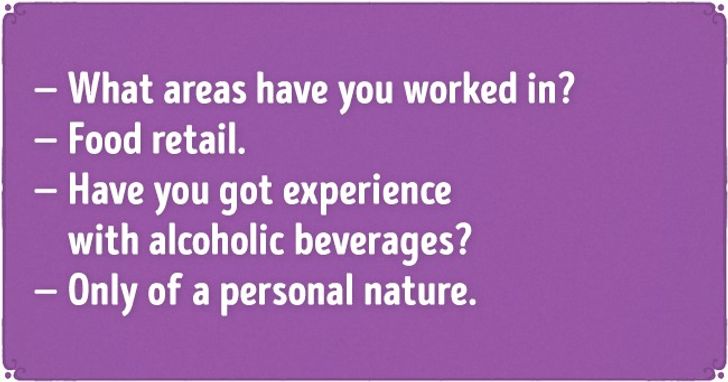 I work in HR, and there’s a post in our firm which doesn’t stay filled for long. In the past two years, five girls resigned from it to go on maternity leave. Finally, our boss decided that this vacancy should only be open for male employees. But this didn’t help either. The guy who got the job three months ago came to me today, carrying a bottle of champagne. He said, “My wife is pregnant, but she can’t leave work because her salary is four times bigger than mine. So I’m going on maternity leave instead.” Talk about a jinxed position! © “Overheard”

Oh, crap! I’m late for my job interview again! This wouldn’t have been a big deal, except I’m the interviewer! @makropira

I’m working as a recruitment manager. Every time I’m conducting an interview, people try desperately to see what I’m writing in my notebook. They’re certain I’m ticking off their strengths and weaknesses. In fact, I’m drawing hearts and owlies, because I get so tired of standard questions and pre-rehearsed answers. My advice to the applicants? Just be original; be yourselves! © “Overheard”

Yesterday, as I was helping this inexperienced young recruit finalize his employment papers, he made everyone in the office chuckle by putting “Son” in the “Family Status” field. © “Overheard” 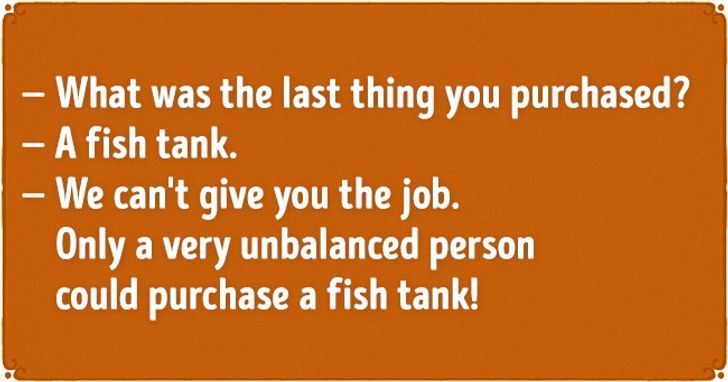 Recently, our boss asked me to put out two job ads aimed at students. One vacancy was for someone willing to work for four hours, five days a week; the other was for someone who’d work on weekends, from 10 a.m. to 10 p.m. (responsibilities: sitting in an empty office, answering sparse phone calls, updating social network content, assisting the boss when needed). I’ve spent a few weeks handling the applications, and now I can say that I’ve had the chance to observe a decent portion of our young generation. I received over 100 résumés, plus about 80 phone calls. In the end, I invited 28 people for an interview. Of those 28, only 6 people came on time. 9 people were about an hour late, one person kept me waiting for 3 hours, and another one didn’t arrive until two days past the interview date. The rest didn’t show up at all. © bash

Today, I witnessed a group of five women apply for the job of a cashier at a well-known grocery chain. The personnel manager asked them to fill out an applicant’s questionnaire. Well, they did exactly as they were told…by filling out just ONE questionnaire between the lot of them. © “Overheard”

Even though I am a journalist, I’m still a timid and even fearful person. I feel especially shy in the presence of tall imposing people. Once, I ended up being interviewed for a job by precisely this type of person: a senior director at one of the leading TV studios. He kept walking around the room, searching for something in his pockets, while I stood, close to fainting, mumbling something about myself. Suddenly, he fished out a huge handkerchief and sneezed into it so loudly as to make me crouch down in terror and shout out, “Oh fuck!” Then he wiped his nose, looked at me, and said, “You’ll fit in. Get up to the second floor to the Department of Information.” He didn’t even look into my résumé. And that’s how I became part of a great team which I still remember with much warmth and gratitude. © Larisa Ledeneva