People who work in customer service or the fast-food industry sometimes have to go through some strange situations, to say the least. You’d think that the atmosphere of an establishment could clearly let customers know where they are, what they can and can’t order, and other basics. However, against all odds, that’s simply not the case. Some people go to McDonald’s to order sushi, while others head to Wendy’s to get KFC. But the good thing is, some of the employees who have to live these strange experiences recall them with some degree of humor and share them with everyone online so that we can all laugh together.

Bright Side had fun reading many of these stories and compiled 20 of them to prove that people working in fast-food restaurants should definitely get a Nobel Prize for their patience. 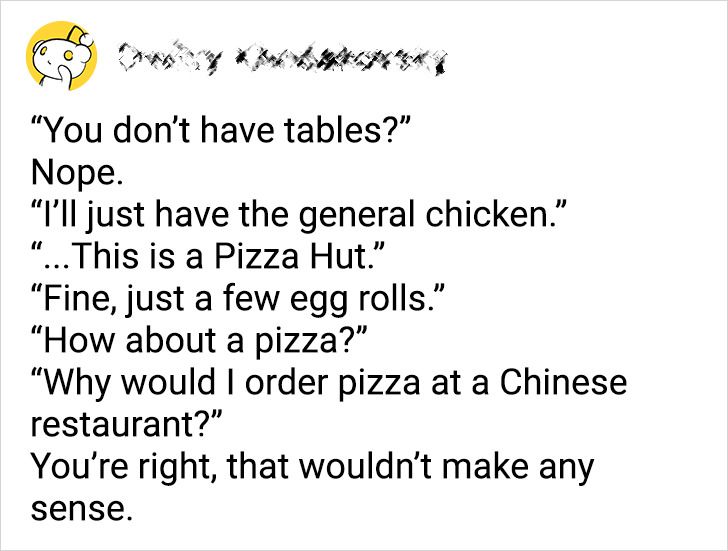 One time, this older dude rushed up to order and slammed a coupon on the counter, saying, “I want this!” I pick it up. It had a menu item for KFC. I asked him, “What exactly would you like to order?” He instantly gets disgruntled with me for not reading his mind and shakes his finger at the coupon and said, “Well, whatever is on the coupon, obviously!?” in a condescending tone. I just looked at him for a minute and said, word for word, “Sir, this is McDonald’s. I don’t know what you want me to do with this KFC coupon.” He looked at me, dumbfounded. Then he looked behind me at the menu and around the store, and then yelled, “Aw, man!” (as this wasn’t his first time walking into the wrong establishment), grabbed the coupon, and stormed off. © BALD-HEADED_H** / Reddit

It’s really weird that this became a meme because I swear this is true. In ’95, I was driving from New England to Florida for a college spring break trip. Somewhere in South Carolina, we stopped at a Wendy’s. Near the hallway to the bathrooms, they had a big map of South Carolina and I said to a person, “Can you tell me where we are?” I was pretty clearly indicating the map. The lady said, “Honey, you’re in a Wendy’s!” © Wobble*** / Reddit

A customer asked for ice cream. I looked at my coworker and we gave each other a “what on earth is going on” look. I asked him to repeat his order and he asked for ice cream again until I had to say, “Sir this is Tim Hortons. We don’t sell ice cream.” I’m pretty sure he was not doing fine. © breakfast2002 / Reddit

Guy: Yes! She told me she came through the drive-thru, and when she got home she realized the order was wrong. Y’all need to give us our money back and give us the right food.

Me: **confused while looking around the mall**

Me: Did she drive through Sears or JC Penny to get here?

Guy: Looks around and finally realizes he’s in the middle of a mall. Grabs the bags and huffs away.

I used to manage a Del Taco during my highschool teenage years, and we had an older man come in once a month and drive straight through the speaker to our window. At the said window, he’d look at me until I came over, would ordering Starbucks, then midway through, he’d realize it was a Del Taco and drive off. Once a month, every month, for 2 years. © BigOlSmelly / Reddit

I worked at Dunkin’, and one time, a customer came through the drive-through and complained to us that the drive-through was built in a way that made it hard to drive. She started yelling at my co-workers so I just put down what I was doing and told her, “Ma’am we cannot change the construction of the building.” Like, seriously though, what’d she want us to do? I just make sandwiches. © givemethebeef / Reddit

Worked at Chick-fil-A for too many god-awful years. A guy walks in looking at his phone and says, “I’d like the fish sandwich combo.” Cue confused blinking on my part, and then I finally ask, “What was that?” The dude looks up from his phone, sighs, and says, “I want the FISH SANDWICH.” Me: “Sir, this is CHICK-fil-A. Literally, all we have is chicken.” He finally looked up at the menu behind me, then around at the restaurant, completely bewildered, turned around, and walked out. I don’t know how he even drove there, parked, and walked in without noticing where he was. © JustDatingTowns / Reddit

Y’all wouldn’t believe the amount of disappointed rich people who come to Panda Express and find out we aren’t serving authentic Chinese food. Once, a well-traveled rich woman came into Panda Express and stood at the buffet line for about 10 minutes, critiquing our “mistakes” and explaining how Chinese cuisine doesn’t actually have fried wontons with cream cheese filling. Ma’am, we just fry what came in the bag from a warehouse in California. © Upstairs_Cow / Reddit

I worked at the concession stand at a movie theater in high school. This guy orders popcorn and a large diet Pepsi. Comes back to the counter about 10 mins later complaining that his soda is carbonated. I explained to him that all of our sodas are carbonated and he asks me if we have a microwave. We do, so he wants me to go into the back and microwave his soda. He wants it warm but not too warm. Went to the back and had to pour the soda into 2 different cups because the original wouldn’t fit into the microwave. Truly bizarre experience. © grizz07 / Reddit

I worked at a Chipotle for 4 years and got some pretty interesting requests. But I’ll never forget the time someone ordered soup. Chipotle doesn’t have soup. I promptly reminded her this was a Chipotle, but she insisted we could do it. So we made her soup at Chipotle! It was the grossest concoction of bean juice, sofritas, mild, medium, and hot salsa, and sour cream. She was stoked. © TheBeanYTheBug / Reddit

Worked at a small roadside produce place. My boss had a few different stalls so I was often left to run the stall myself. I remember this lady walked up and said, “Do you have any tomatoes?” I said, “Sorry we don’t.” She replied, “But the place down the street has them.” I said, “Then go there.” © UniverseBear / Reddit

My friend told me a Chinese place had sushi but I never saw any on the pictures on the wall. “Do you have sushi?” I asked. “This is a Chinese restaurant. You want a Japanese restaurant,” the worker said. I could tell she didn’t like the question. © SillyGayBoy / Reddit 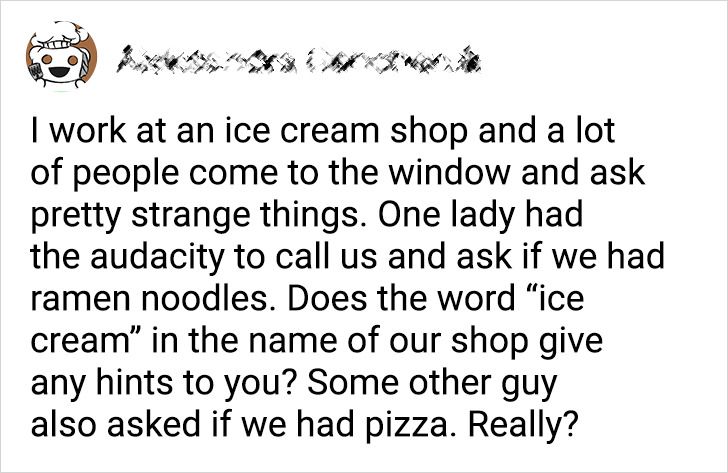 When I was really young and had recently tried fried calamari, I confused it with the fried clam strips at White Castle. I was adamant that they had fried calamari and convinced my dad to order it for me at the window. They laughed at him. © GAL_9000 / Reddit

Worked at a burger place, and a lady came in yelling at me to talk to a manager that I had never heard of. After repeatedly telling her there was no such manager, I asked what her order was and she started listing off tacos. I said, “Ma’am we don’t sell tacos.” She walked out and I just smiled at the next customer in line. © AMJFazande / Reddit 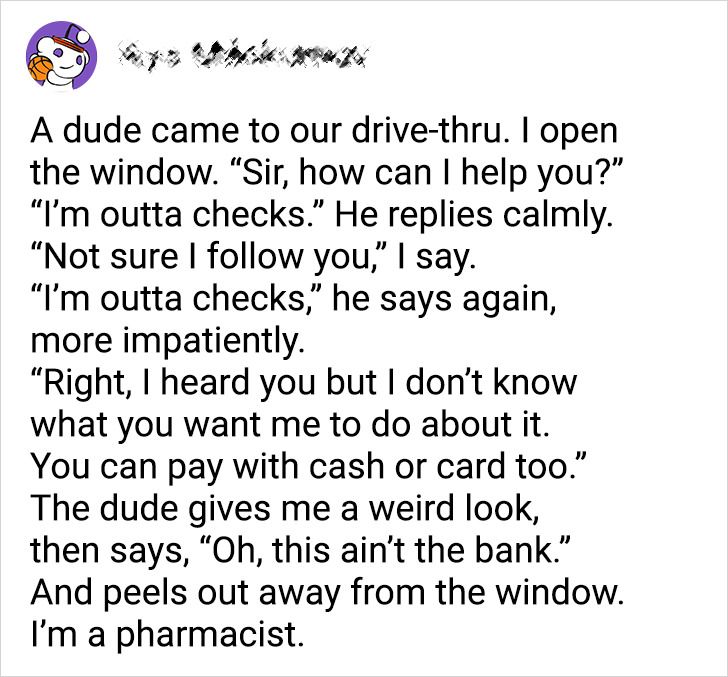 What’s the fast-food restaurant you go to most often? Have you ever had anything strange happen to you in one of them?