Normally, when a person moves into a house that has already been occupied by other people for a long time, they are exposed to many unforeseen events. And we’re not just talking about having to repair things there or even about moving furniture and stuff like that. We’re saying that, from time to time, recently bought houses have some “surprises” that the previous owners might have wanted to hide. Sometimes it might just be a small object that they forgot somewhere, but for some others it’s a door that leads to a secret room that they thought “nobody would ever find.”

Well, Bright Side wants you to open that secret door and find what’s hidden there. So we put together a compilation with 18 stories from people who, while remodeling, came across a surprise that made them wonder, “How could that not have been on the house’s blueprints?”

1. “I’m redoing my kitchen and the old owners put a wall over an exterior door.” 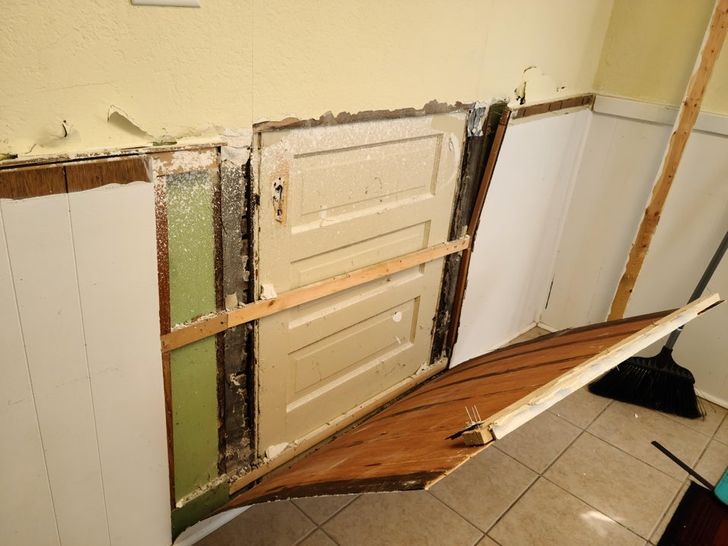 2. “Found a steam room and hot tub in my basement, behind a wall during demo.” 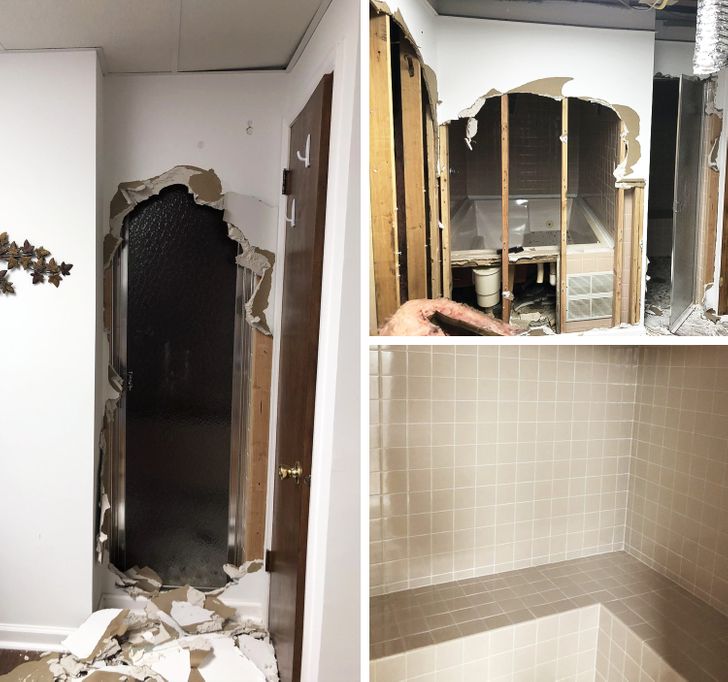 3. “My basement flooded and so we tore down the walls. We were surprised to find a screen door leading to another room full of rubble and garbage. Inside was a magazine from a local newspaper printed in 1957.” 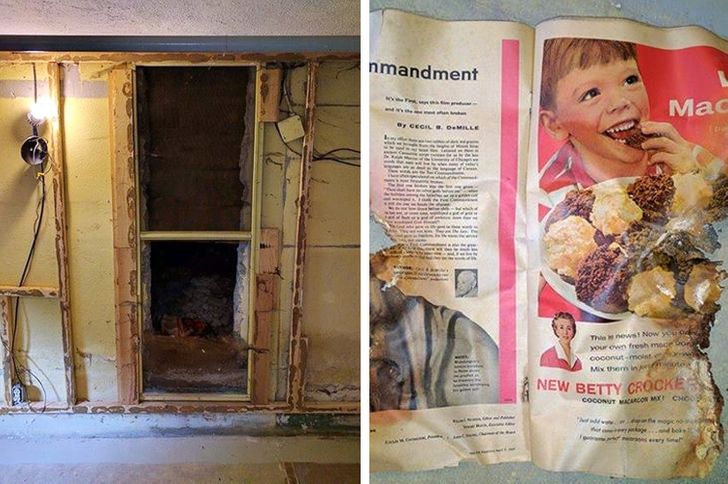 4. “This is my friend’s aunt’s house in Mexico. They’re doing a bit of remodeling and this was behind their wall! Behind the green door, it was just bricks!” 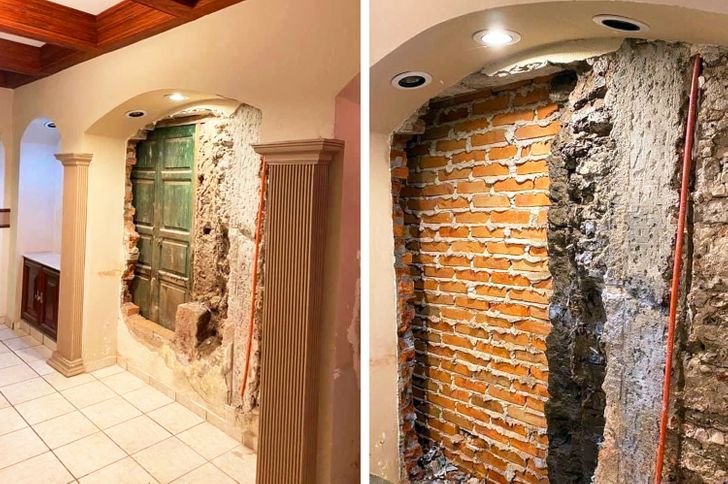 5. They broke through the wall at the stair leading to their basement and found a vaulted room that apparently has been hidden since the 19th century. 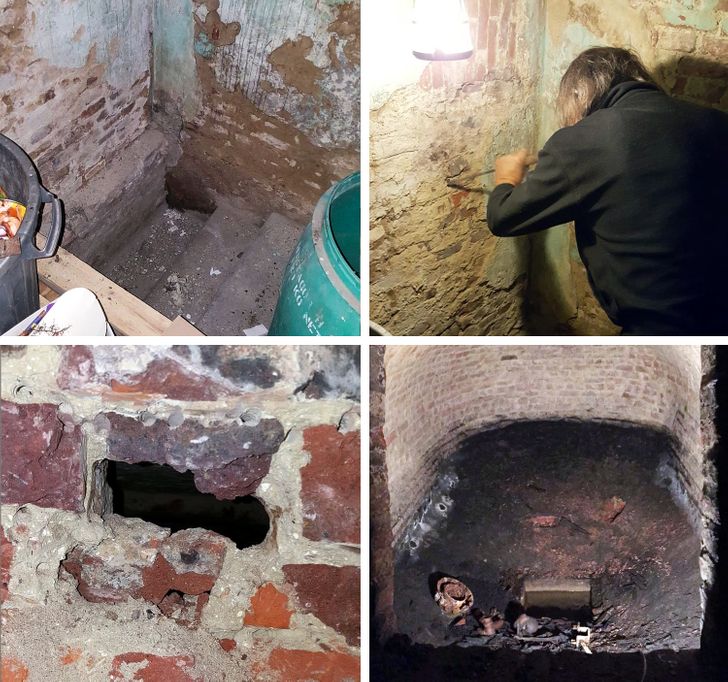 6. “I took a wall out of my closet and found a makeshift passageway. With a large heavy creepy basket in it. Apparently, this silverware was precious to them.”

7. “My friend decided to replace her old carpet and she found a cellar door and a cool surprise” 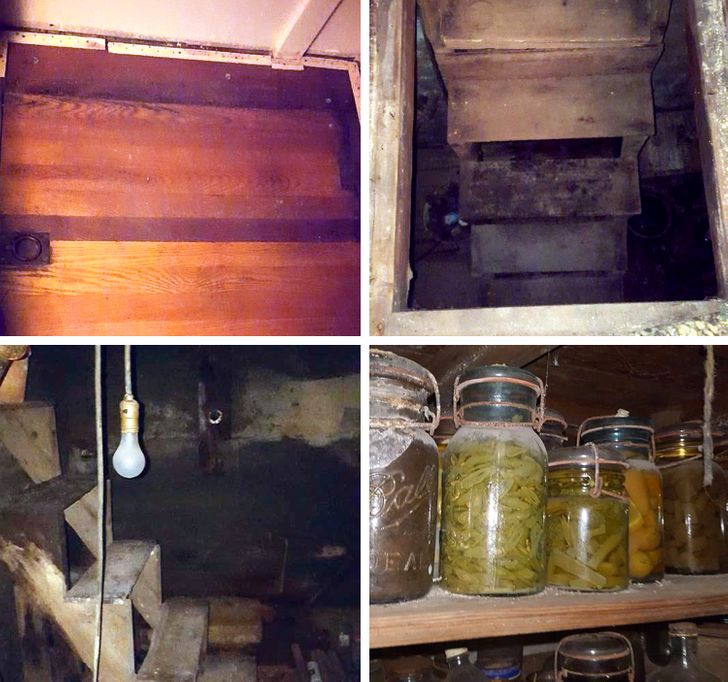 8. “We found a trap door after taking up 7 layers of kitchen floor. This trap door leads to our old water cistern. It’s about 20 feet deep.” 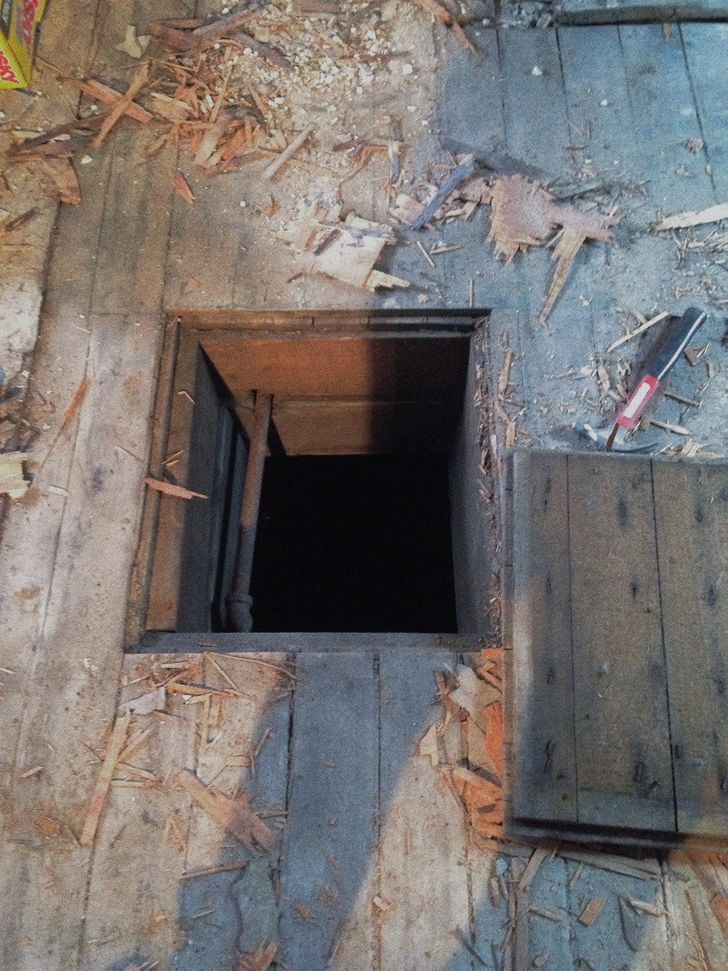 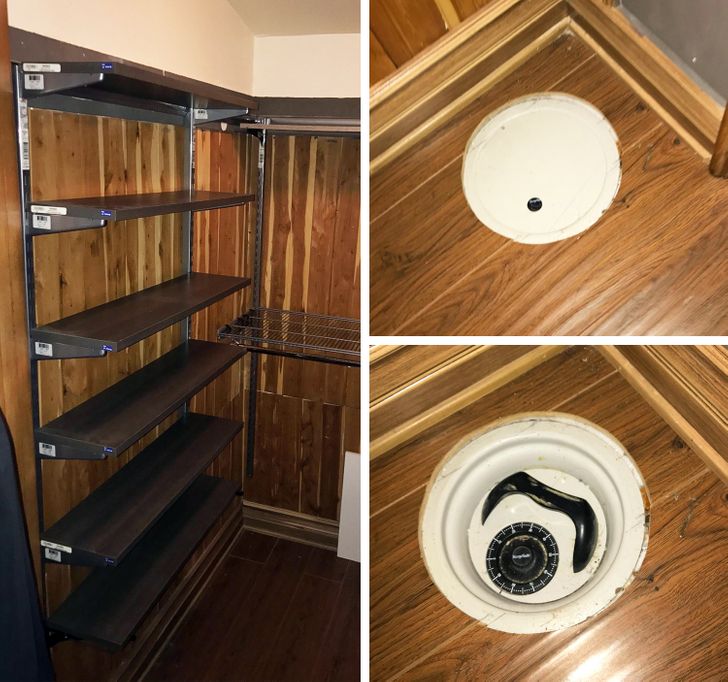 10. “My wife and I bought a house. When we started moving all our stuff into the house I was tossing boxes anywhere I could. After a bit, my wife noticed a panel in the floor and said, ’Did you know we had a trap door?’” 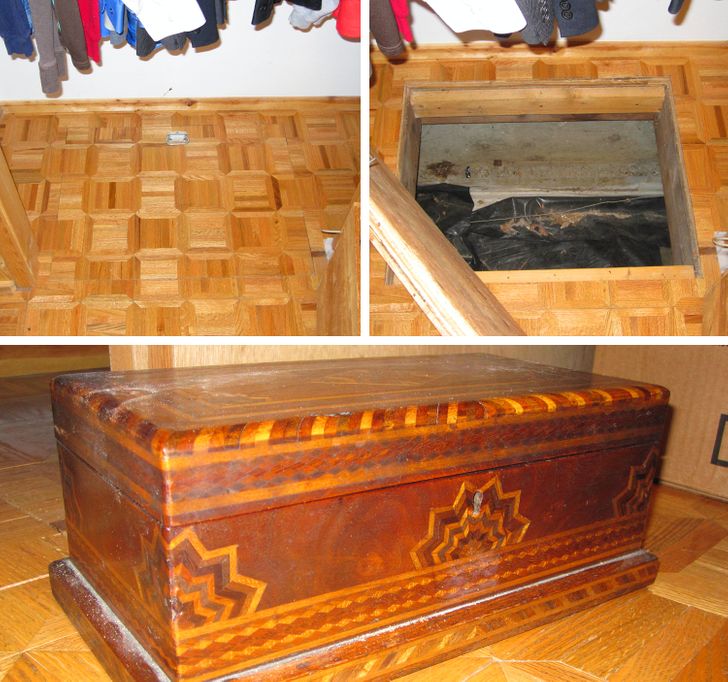 “This intricate little box was left half under some plastic. It’s locked tight and who knows how old it is. I’m afraid to force it open and risk ruining the box itself.”

11. “My dad recently purchased a new home. We ripped up the awful flooring and discovered this safe cemented into the floor inside of the basement closet.” 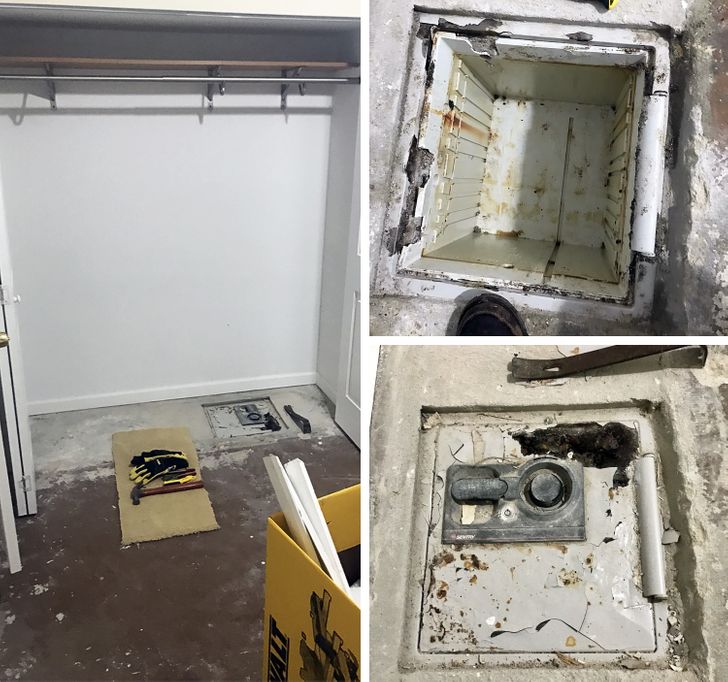 12. “We found a hidden door in our house! A beautiful Art Deco hardware! So pretty!” 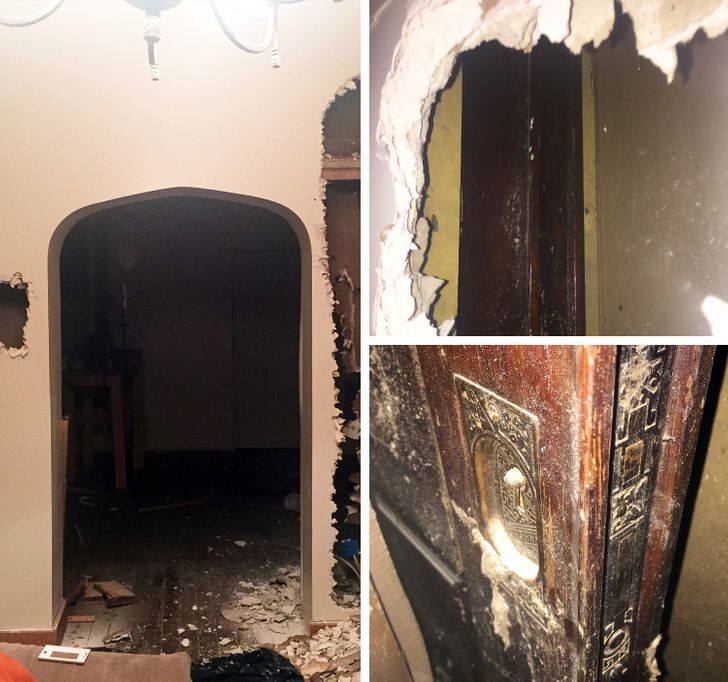 13. “One of the stairwells in my 125-year-old house has a hidden compartment for some reason.” 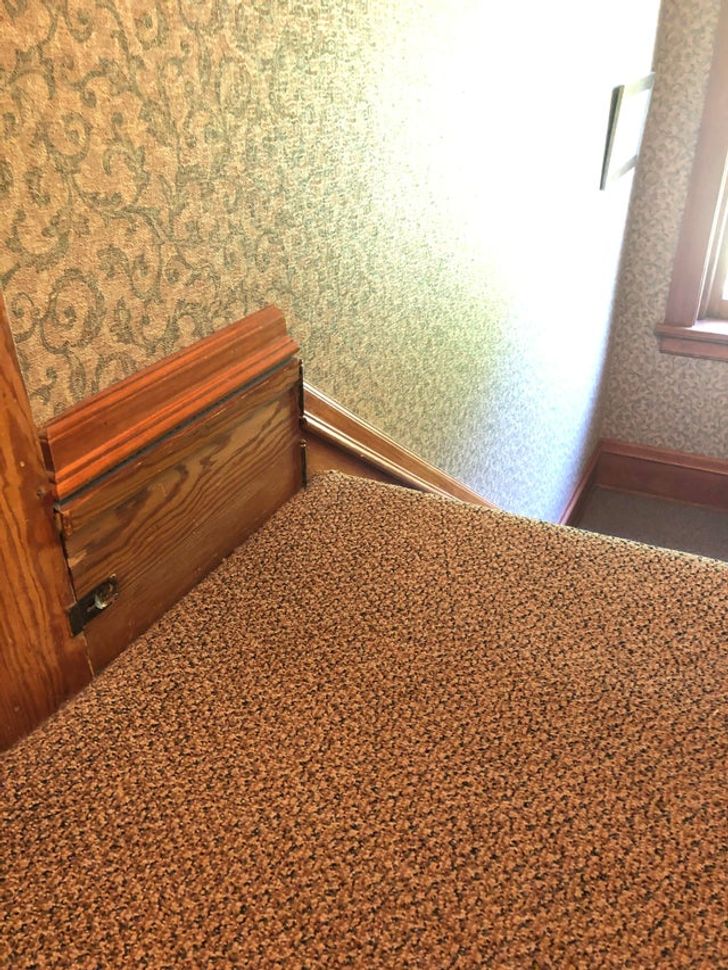 14. “I found a hidden compartment in the wall of my new house!” 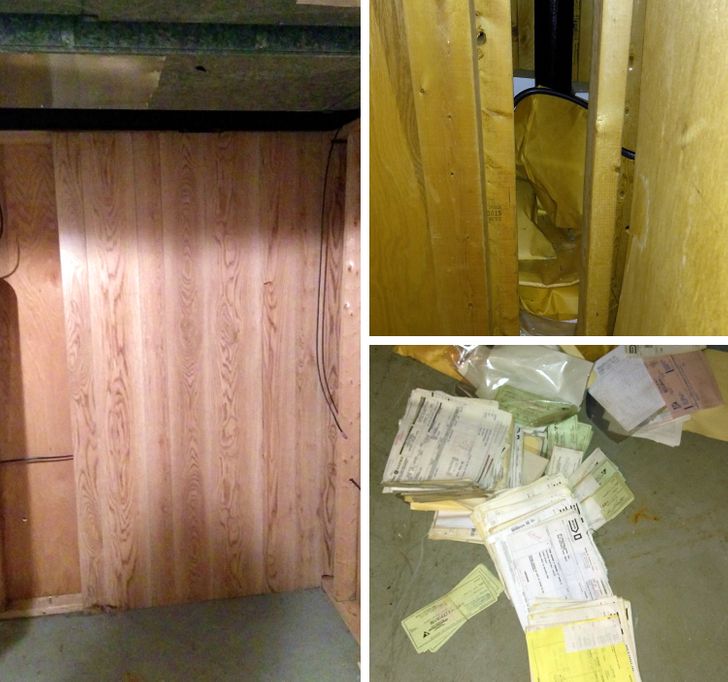 “The house had been owned by the same family since the ’60s. It was full of financial documents, bank statements, and check copies from the ’70s — ’90s for a parts fabrication company and some rental properties the previous owner ran.”

15. “Just moved into my first house about 2 weeks ago and I’m starting to get settled in. While sorting things out in the basement, I noticed this sheet of plywood that oddly fit in between the stairs and the wall. When I finally got it to move, I noticed there was something behind.”

16. “We found something awesome when redecorating our house. Fiancé was putting shelves up and left his tools on what (we thought) was left of an old fireplace. Out comes the crowbar and he pulled a wooden panel from the wall revealing this beauty: A complete cast iron fireplace from the 1900s.” 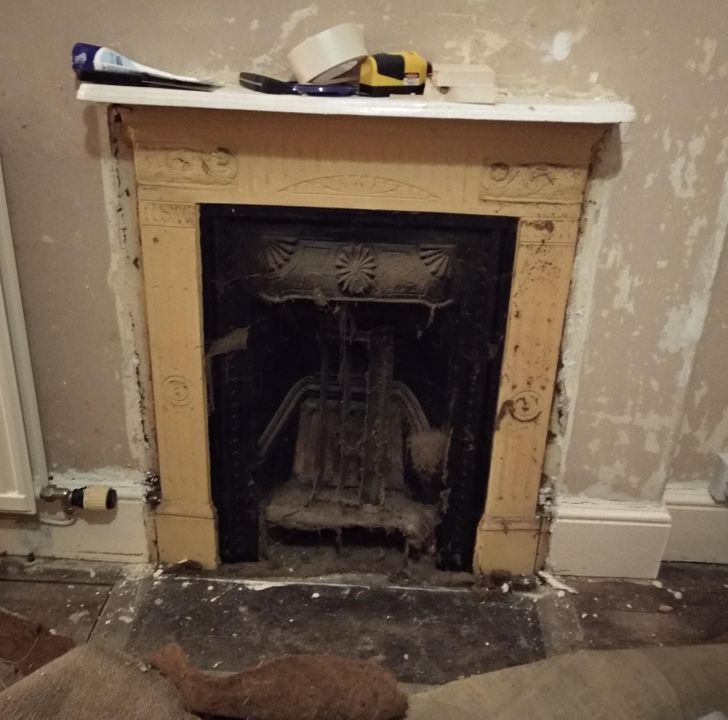 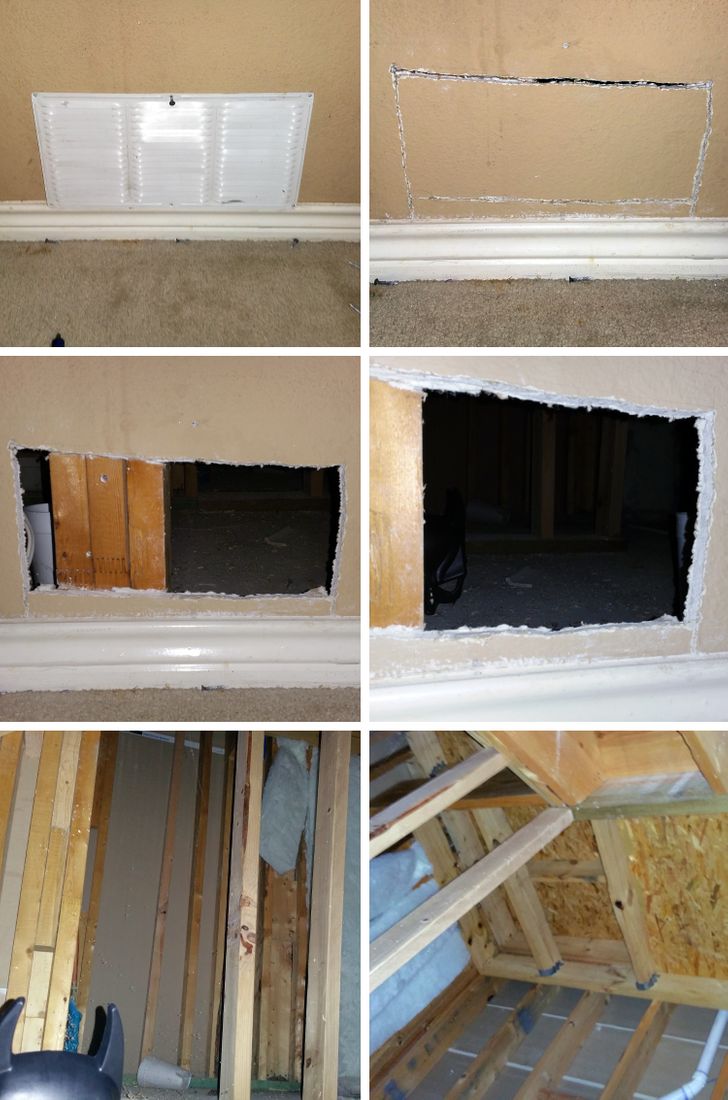 18. “The new house my parents bought has a secret room hidden under the stairs.” 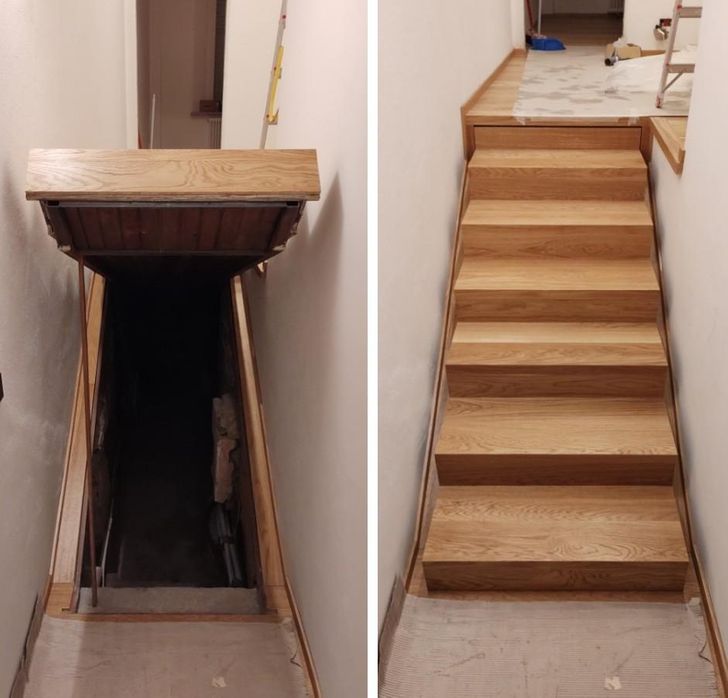 What surprises did you come across when you moved into a new house? Tell us about the biggest finds you’ve had.