For those of us who aren’t from the United States, you may have wondered – just why is there so much fuss and demand to tip your server after eating out?

The reason for this is so – thanks to some archaic laws that have yet to be repealed, restaurants and similar eateries aren’t expected to pay their staff minimum wage.

Instead, the staff is expected to achieve or even exceed minimum wage by making up the difference in tips and then are taxed based on that assumed amount.

Especially when you realize that on a slow day, the average server might not get any tips at all, resulting in them essentially going into the negatives just to pay their taxes.

In some horrible cases, it has servers practically paying the restaurants to let them work there!

No wonder there is such a huge call to ensure you tip your servers at least 20% of your meal’s cost. For 23-year-old expectant mother, Courtney English, waiting tables at Lamp Post Diner in New Jersey is about all she can do while she prepares for her upcoming pregnancy.

Most soon-to-be mothers would start slowing down and taking things a little easier once they hit the eight-month mark in their pregnancy, but English has no other choice.

Either she works as hard as she can up until her daughter’s birth, or she allows her struggles with her bills to overwhelm and drown her.

It was at this time she had met her Good Samaritan.

The diner English works at is frequented regularly by local police officers, especially during the lunch-hour rush.

So another Voorhees officer sitting down at one of English’s table wasn’t something out of the ordinary. 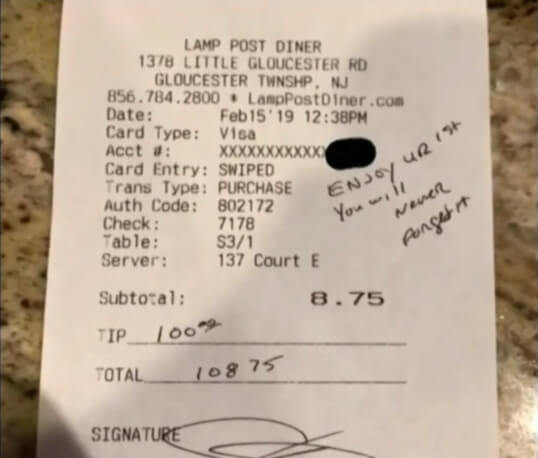 The two carried out some casual conversation as the officer was served his lunch, then English’s attention was completely occupied by a much larger party at another table.

There, guests were excited about how obviously far into her pregnancy she is, and couldn’t help asking her all sorts of questions – for example, if this was going to be her first child, and when the baby’s due date was. It seemed that all that talk had not gone unheard by the police officer.

When English came back over to pick up his paid bill, she was left in shock. In an act of kindness, the officer had left a $100 tip on an $8.75 bill!

It wasn’t just the unexpected amount that moved her to tears, however.

On the receipt was also a heartwarming note, reminding her to enjoy her firstborn child, as it will be an experience she will never forget.

This unexpected help is certainly one she won’t forget either.

English’s baby girl (who will be named Kayleigh) is expected to arrive on the 1st of April, according to the young woman’s father.

English is planning to work up till the very last day in order to accrue as much money as she can before she goes on maternity leave.

Hopefully, this big tip will help ease her burden somewhat!