The Biden administration has announced that Rachel Levine, assistant secretary of health, is the “first-ever female four-star admiral” of the U.S. Public Health Services Commissioned Corps.

What are the details?

In a Tuesday media release, the Department of Health and Human Services said, “The U.S. Department of Health and Human Services (HHS) publicly announced today the nation’s first openly transgender four-star officer across any of the eight uniformed services of the United States. Admiral Rachel Levine, who serves as the HHS Assistant Secretary for Health and head of the U.S. Public Health Service (USPHS) Commissioned Corps, was ceremonially sworn in as a four-star admiral.”

The statement continued, noting that Levine “now serves as the highest ranking official” in the commissioned corps.

“Admiral Levine now serves as the highest ranking official in the USPHS Commissioned Corps and its first-ever female four-star admiral,” the release continued. “Admiral Levine will lead 6,000 Public Health Service officers who are dedicated to serving our nation’s most underserved and vulnerable populations. Today’s historic announcement builds on the accomplishments of LGBTQ+ History Month and is a major step forward as we work to create a more inclusive society.”

In a statement, Levine applauded the appointment as working toward a “more inclusive future.”

“I am humbled to serve as the first female four-star officer of the U.S. Public Health Service Commissioned Corps and first openly transgender four-star officer across any of the 8 uniformed services,” Levine said in a statement on the appointment. “This is a momentous occasion and I am pleased to take this role for the impact I can make, and for the historic nature of what it symbolizes. May this appointment be the first of many like it as we create a more inclusive future.”

Health and Human Services Secretary Xavier Becerra lauded the accomplishment, and in a statement said, “Admiral Levine’s historic appointment as the first openly transgender four-star officer is a giant step forward towards equality as a nation. This is a proud moment for us at HHS. Admiral Levine — a highly accomplished pediatrician who helps drive our agency’s agenda to boost health access and equity and to strengthen behavioral health — is a cherished and critical partner in our work to build a healthier America.”

U.S. Surgeon General Vice Adm. Vivek Murthy also celebrated the announcement and in a statement added, “Her appointment represents an important step towards a more inclusive future, and her service will undoubtedly advance the USPHS Commissioned Corps’ mission to protect, promote, and advance the health and safety of our nation.” 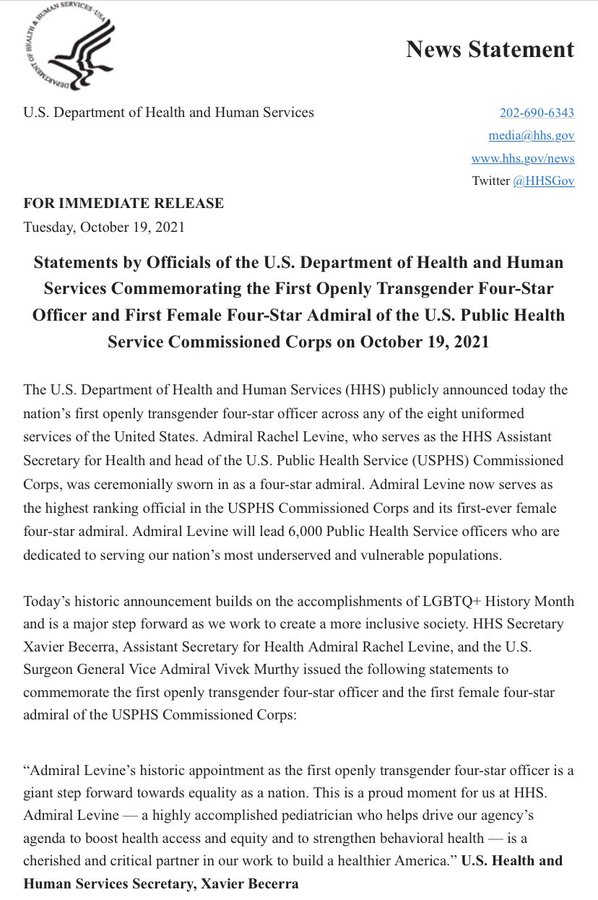