A New Zealand news presenter has hit back at a viewer who called her Māori face tattoo a “bad look”.

Oriini Kaipara made history in 2021 by becoming the first person with a moko kauae – a traditional marking worn by Māori women – to host a primetime news broadcast in New Zealand.

While the 39-year-old was praised by many for embracing her culture, one viewer, identified only as David, made a complaint writing that her traditional tattoo is a “bad look” and said Kaipara “bursts into the Māori language which we do not understand”.

The journalist then took to her Instagram stories to share the viewer’s email and a response slamming David on his ignorance. 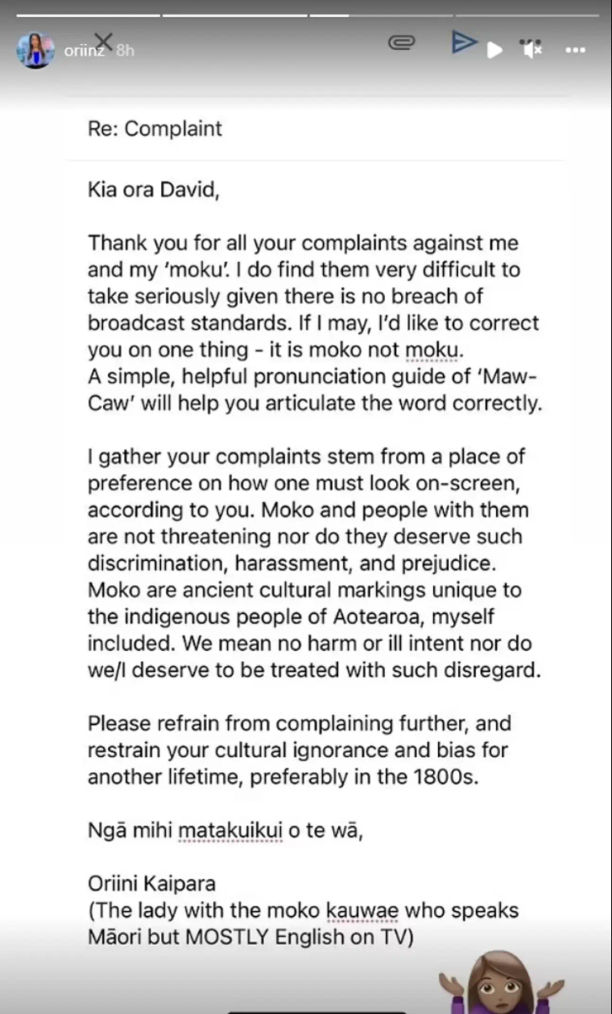 “Thank you for all your complaints against me and my ‘moku’. I do find them very difficult to take seriously, given there is no breach of broadcast standards,” she began. “If I may, I’d like to correct you on one thing – it is moko not ‘moku’. A simple, helpful pronunciation guide of ‘Maw-Caw’ will help you articulate the word correctly.”

“I gather your complaints stem from a place of preference on how one must look on-screen, according to you. Moko and people with them are not thre*tening, nor do they deserve such discrimination, haras&ment or prejudice,” she continued.

“Moko are ancient cultural markings unique to the indigenous people of Aotearoa, myself included,” she said, before concluding that the viewer restrains from “cultural ignorance” for “another lifetime preferably in the 1800s”.

Kaipara politely signed off with “Nga mihi matakuikui o te wa,” before writing, “The lady with the moko kauwae who speaks Māori but MOSTLY English on TV.'”

The newsreader has since spoken to The New Zealand Herald about the incident and said the specific viewer she’d responded to had been “relentless” in his objections.

“These types of complaints are being sent by a minority,” she emphasized, saying she also received a great many “lovely and thoughtful” messages.

“The fact that my existence triggers some people is a testament to why we need more Māori advocates in key roles across every sector.”