When we are invited to a wedding, some of these things immediately come to mind: cake, guests, music, and food. In general, we attend weddings with certain expectations: we will eat more exquisite and abundant food than usual and we will dance a lot. It is normal that we expect to have fun. But it just so happens that, at times something fails or simply does not fit at all with what we were expecting.

Bright Side found some threads from Reddit where their users tell us about the strangest, the most unique, or simply the worst wedding they have ever attended. The truth is that most of the stories you will read here could easily be a scene in a comedy movie — you will laugh a lot.

My wife’s friend was an orphan and had financial difficulties. Everyone pitched in for their wedding, but it ended up being a pretty simple ceremony. We thought that maybe the newlyweds had played only a few of us, charging us for attending (which I was fine with, in the beginning, I actually felt happy I could help them out). Turns out they took everyone’s money to make a down payment for a new house, in a different country. She left a lot of debt behind and used the wedding guests as a piggy bank. TudoCasual

The wedding was for a co-worker, who got married in Vegas. The organ player, was a very old woman, with a tip jar on the organ! Now, I don’t care if you don’t have or want to spend money on your day, no problem. But geez, one balloon tied to everyone’s chair, and a balloon arch in the back of the room, for some reason. It really looked like a kid’s birthday party. Then the appetizers… sigh. They had plates of Oreos and store-bought chocolate chip cookies. Finally, the food arrived… from a local Italian restaurant… in large pans… room temperature. They started to play music from CDs… very old and depressing. My friend and I decided to bail early. We went out of the wrong door, into a very small bar, filled to the brim with old men, drinking and staring at us. They were basically stuck in there because the only door out, was into the sad reception. We finally found the right door and didn’t look back. Horrible day. WyldBlu

My cousin’s wedding. I, at 6, was forced to be a bridesmaid. I despised wearing dresses, and was extremely shy. I had to wear a hideous, itchy dress and shoes that hurt my feet. I’d met my cousin about twice, so she was basically a stranger and I was forced to travel in a car with her and a bunch of other strange adults, which was terrifying for me. Then had to walk down the aisle with them, being stared at by more strangers. Then stand there bored out of my skull while they said their vows (I had to stand behind the other bridesmaids, so my view during this time consisted entirely of people in unflattering dresses). I hated every last second of it.

They got divorced 6 months later. She married twice more, thankfully without my involvement!
Frantastic79 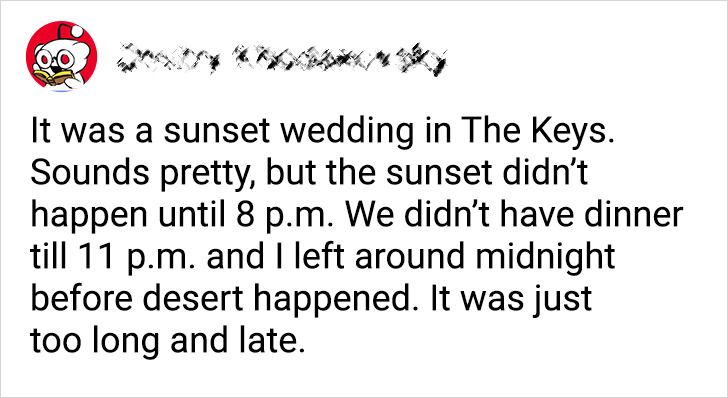 My cousin’s wedding. He was 19 and the bride was 16. Both of them are from dysfunctional families who hate each other. Relatives from both sides constantly tried to insult each other. The bride’s brother had recently been released from prison and he was really close to starting a fight with different guests at least twice. To register their marriage, we had to go to another part of the city and just before the ceremony began, my cousin said that the rings fell out of his pocket at the bride’s house, but for some reason he did not pick them up and there were no rings for the ceremony. It was a disaster. Lilysnek

They were broke 20-something-year-olds, the dude was just starting med school and the girl was a free-spirited artist type. Well, neither of them really wanted to plan a wedding… so they did the minimum possible. They held it in an old schoolhouse with no decor, not enough seating, and in the sweltering hot Florida sun. Neither of them live in Florida, but since his mom was the one who was basically planning everything, they held it in FL. However, that meant a majority of his friends didn’t come, and it was just his mom’s friends (my parents + me being 3 of them). The bride basically had no one, her own dad didn’t show up. During the reception, they had these weird sesame seed taffies at everyone’s seat. We didn’t get food for 3 hours and just sat there since the dance floor wasn’t open. I got chicken, which I could barely cut because it was so dry. Also, there was no garnish or anything on the plate, just chicken. The dance floor was tiny because, you know, this was in a schoolhouse. There was also no cake. Overall, a 0/10 wedding. discorporating

A while ago, my wife and I went to a wedding that neither of us wanted to happen. When we were on our way, we started getting severe storm warnings on the radio and the wedding was supposed to be on a boat. We finally get to the place. Total attendance: 9 people (including the wedding couple and the officiant.) At least it was a pretty house. So we go get on the boat and, thankfully, the lake was perfectly calm.

So we’re sitting on the boat while the owner is piloting it out near an island in the middle of the lake. The owner’s wife, I’m pretty sure uses it more than he does, is warning him “Hey, it’s shallow here” and he’s completely ignoring her. He drags the prop through the bottom of the lake. So then they stop, and put down sea legs and start setting up to actually do the ceremony. All pictures and videos were done on a couple of cell phones. Also, the entire ceremony, I’m sitting there and the rear legs of the boat are sinking into the lake bed, so we are just slowly rocking back as it sinks into the lake.

Well, we finally get to go back to land. Bring up the sea legs, start up the boat… and the thing is beached. Boat dude decides to dig a deeper hole with the prop, thinking that will help. When the boat finally came unstuck it starts drizzling… My wife, the bride’s daughter, and I just stay quiet.

So we get back to the house and my wife and I are antsy because we aren’t getting home before 11 p.m. and I had to wake up at 4 a.m. for work the next day. Did I mention the wedding was on a TUESDAY?! SteevyT

My father just had his second wedding. It was a pretty low-key, low-budget wedding with only close friends and family. The reception was held in a massive tent. When it was time for the best man to give his speech, he got up to go to the podium where the mic was.

As he was walking behind the wedding party table, he tripped on the last chair’s leg, stumbled about 10-15 feet trying to regain his balance, and went hands first into the table with the wedding cake on it. Half the people were laughing hysterically, while the other half were beyond embarrassed on his behalf.

Needless to say, his speech didn’t go too well with cake all over his suit.Seemseasy11

My friend’s wedding was the worst.

As millennials, we have to accept that we simply cannot have the costly, traditional weddings our parents and grandparents had when owning a home is our next step after marriage.

But… she insisted on having her rustic wedding anyway, and to cut costs for the venue, they had it in the beginning of winter. By the way, we don’t live somewhere warm like California.

Cut to the wedding day, it’s in a barn. But it’s raining the whole time, the ground is muddy, and all of us were thinking about how we’d have to throw away our shoes after the night since they were now ruined. You had to walk through the mud to get from the outdoor bar or to the parking lot (a field of gravel that was also up a hill). The bathroom was a tin shed that was also outside.

It was still lovely to see our friend get married. But it definitely wasn’t wise to have the wedding at that kind of venue in the winter. KittyGurl212

The bride doesn’t show up after 2 hours of waiting, then calls to tell the groom that she changed her mind. Groom starts crying and his mom shouts, “Shut up! I told you to marry Kathy but noooooo Kathy was too fat, huh? You just had to chase a model! She couldn’t even wipe her butt with those nails, much less cook your dinner. Why would Jessica want you? You’re broke and you’re ugly. Kathy wouldn’t have stood you up ’cause she’s ugly too. Serves you right.”

Groom continues to cry while the guests stared in shock. Yes, people, Kathy was there, but just like everyone else, she was afraid to confront the mom. She did give him a hug afterward though. Unknown

There were no tables and chairs. They had an open bar, but no freaking chairs. Everyone had to put their drink on the ground and hold their plate to eat. It was crazy. Everyone just assumed that some sort of terrible thing happened where the table and chair people didn’t bring them, but afterward, I asked her (the bride) what happened and she just said, “Oh we would have had to pay extra for that.” tsim12345 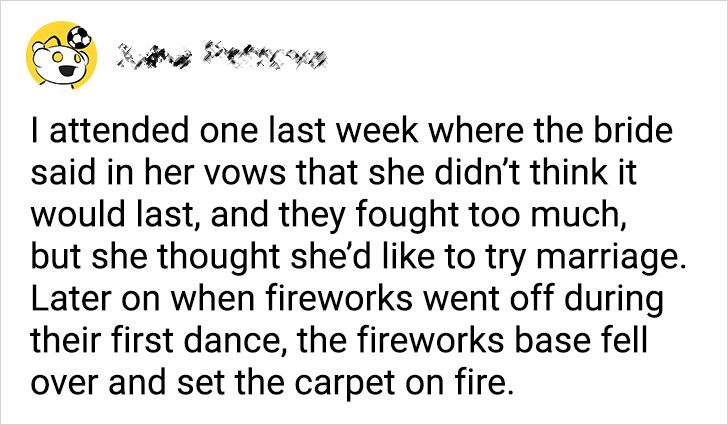 It was a wedding for my aunt and her fiancé. Everything was going great until we got to the “I do” part. When it was my aunt’s turn, instead of saying “I do,” she yelled “I can’t do this!” and ran out. That’s pretty bad, right? It got worse. As she was running out, her fiancé turned around and yelled, “What about the baby?!” That was how we found out my aunt was pregnant. Unknown

Have you also been invited to a failed or somewhat strange wedding? What happened?