If you have a dog at home and you like taking a closer look at what he or she is up to, you’ve probably noticed that they sometimes act in ways that we humans might find weird. Some behaviors are so strange that we might not understand them because we would never do something like that. However, let’s not forget that they are a different species and that, even though they live in a world where humans are the ruling species, dogs only do what they feel like they have to do as dogs, without really caring about our conventions and rules.

Bright Side searched for explanations for certain behaviors that our canine friends have and that we would probably never see in humans (or at least we hope not).

1. They smell other dogs’ rear ends 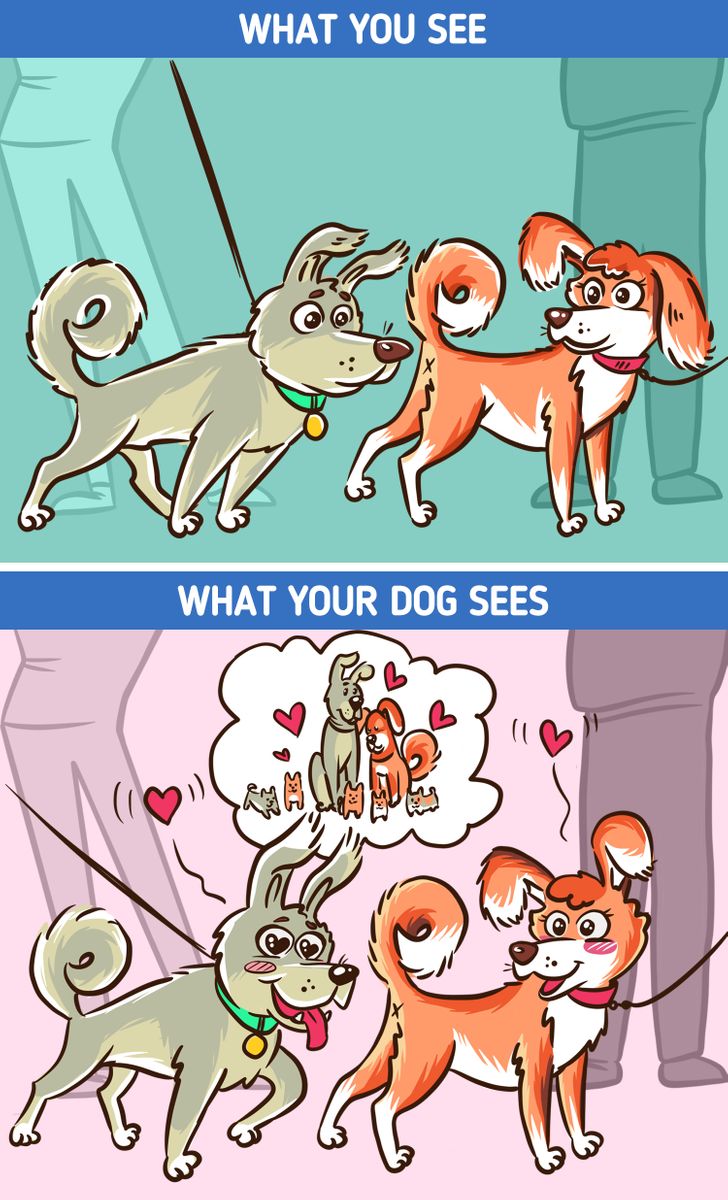 We know how much this ritual can seem, to us, like a sort of handshake in dog language, but it’s actually a little more than that. This particular area of a dog’s body can emit scents that are imperceptible to humans, but for them, they are of great importance. It’s a dog’s way of obtaining vital information about another member of its species. That way, 2 dogs can know, for instance, if they’ve met before or not, and if they haven’t, they will now establish a sort of relationship and turn into something like acquaintances. A dog’s sense of smell can be so accurate that they’ll know whether their new acquaintance is dominant, if they are sick, or even if they are a good match to mate.

2. They bury or hide certain objects 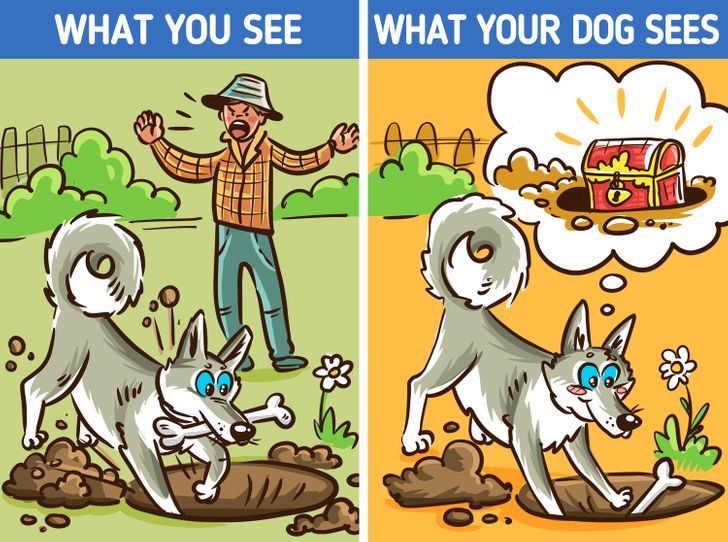 Some dogs have a tendency to dig and hide their bones, toys, food, or kibble in specific places, whether those be at home or outdoors. These places all have in common that the dog thinks we cannot find what they hid there. That’s because, in the past, dogs used to hunt, and then they hid their food to preserve it as well as to keep it away from other hungry animals. This type of behavior has everything to do with the fact that our best friends are protective by nature and “guard” those goods that are delicious or very precious to them. This, by the way, is also true for any object they may deem to be useful to them in the future.

3. They kick their feet after going to the bathroom 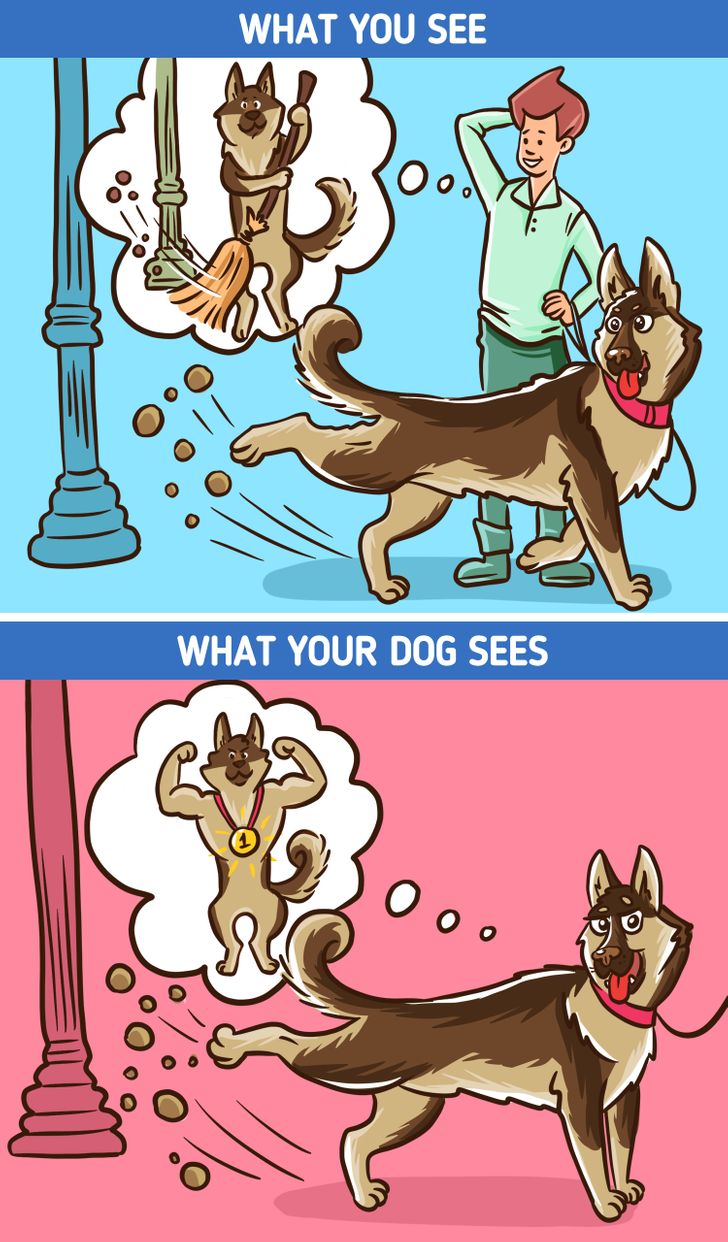 It can be funny to see how your dog, after going to the bathroom, especially if that happens in the park or on the street, kicks its feet back as if it wants to clean up the mess it just made. It’s especially funny because many times dogs don’t even come close to covering their stools. In any case, you should know they’re actually not trying to cover anything. The real reason that they kick back is that it’s an instinctive reaction. Doing that helps them release pheromones on the ground that they use to “mark their territory” and stimulate social interactions with other dogs.

4. They reject certain types of people 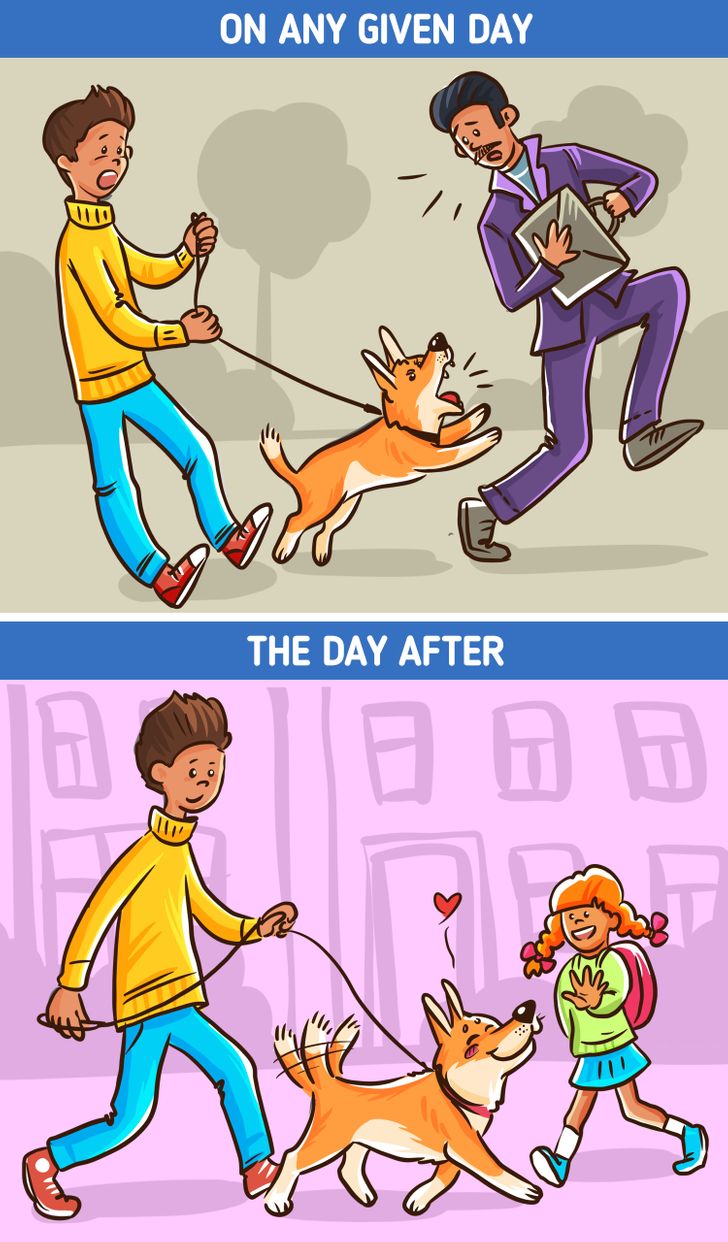 Maybe you’ve noticed that your pet has more of an affinity toward some people than toward others. This is actually one of the things that comes with having a super fine sense of smell like most common dogs have. Moreover, the more acute their sense of smell is, the more selective they will be with the people that approach them. Dogs tend to reject people when the pheromones they perceive from any given human give them a clue as to whether they are in danger. Also, if these pheromones appear to be very different from those of the humans they’re used to smelling, they could react differently.

But pheromones can’t explain everything. Dogs can also feel an aversion to big hats, children, or people with different physical traits than those that were familiar to them when they were just puppies.

Dogs bark to communicate with other dogs and with you. However, you’ve probably noticed that they also howl like little wolves from time to time. The difference between barking and howling could be that they need to convey a different message with each of these. In the past, their ancestors howled to inform the pack of their location or to keep other animals away from their territory.

Nowadays, they do it to make us aware of their presence, to express physical pain, or to show emotions like nervousness or sadness and abandonment. Think about the last time you left your dog alone at home: it probably howled when it saw you leaving. They might also just howl as a response to stimuli in their environment such as sirens or hearing other dogs doing the same thing. 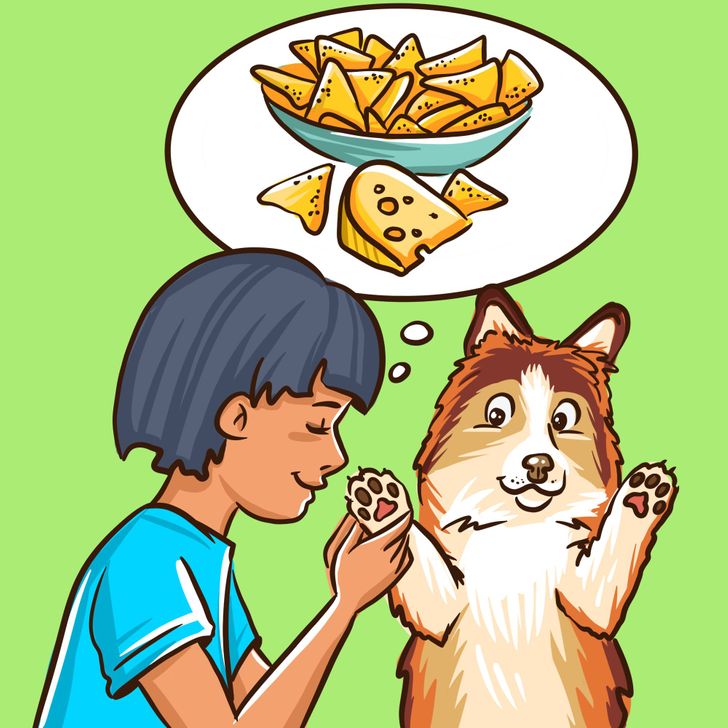 If you have ever brought your nose close to your furry friend’s paws, you’ve probably noticed that they sort of smell like a strange mix of corn chips and cheese balls. This smell is actually quite common in dogs and is nothing to worry about. It’s true that it can change from one dog to the next. The source of this smell is the bacteria in their skin and the fatty acids that help them to keep it healthy. When these decompose, they give off this peculiar scent, which can also be present in their ears. 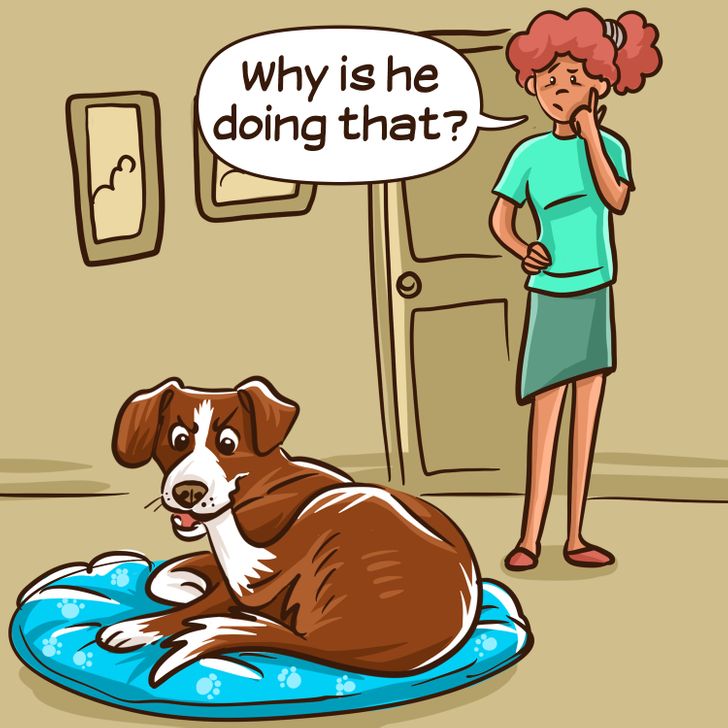 If you’ve ever caught your dog licking or nibbling an area of its body over and over again, you might have wondered what it’s trying to do. There are several reasons for this behavior. Depending on the area they’re playing with and how consistently they do it, it might be time to give their veterinarian a call. It could be due to discomfort caused by allergies, dry skin, itching, or pain. Even boredom can cause your dog to focus its energy on constant licking. It could also be an indication of the presence of parasites, fleas, or ticks. In any case, it’s important to take a closer look at what’s going on if you see your dog licking some part of its body more than normal.

8. They make holes in the ground or in the sand

There are several reasons for a dog to dig holes. If the weather is very hot, they might do it to look for a cooler spot to lie on, and the fresh ground is a great solution for that. Also, dogs that are close to giving birth tend to dig holes out of instinct. However, some also do it out of anxiety or because they feel trapped or bored. Digging holes is one of the most entertaining activities for them.

9. They tend to run away 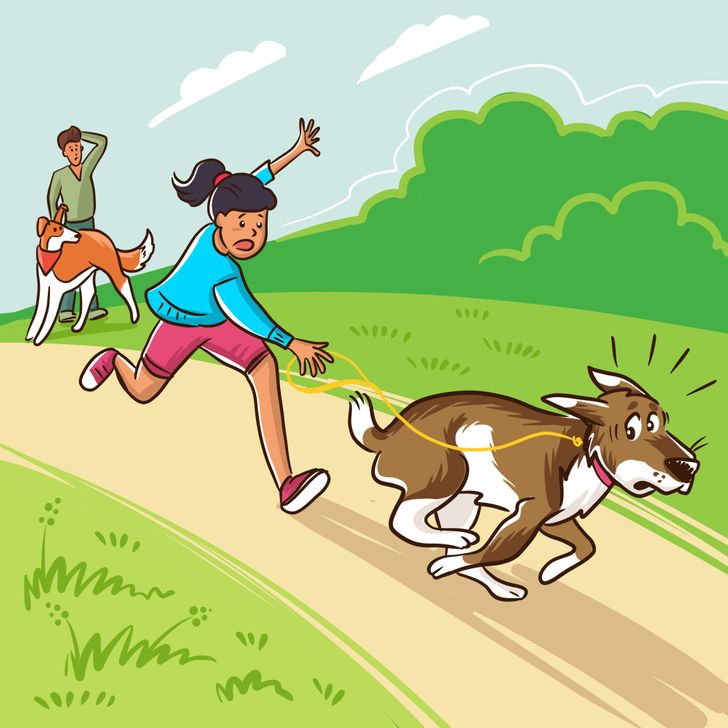 For some dogs, an open door could seem like the perfect opportunity to run away from home. Others are just responding to different stimuli, like loud sounds or running after other animals that they notice when the door opens. Dogs sometimes do this because they have a lot of energy pent up due to a lack of physical activity, fear, or separation anxiety. Also, when they are in their mating stage they tend to just follow their instincts. If they smell something attractive outside, they might feel like exploring what’s going on out there.

10. They eat their own feces or those of other dogs

Coprophagia, a fancy name for eating stool, could actually be more common in puppies than in adult dogs. But keep in mind that while it might seem disgusting to us humans, the truth is that dogs don’t find it disgusting at all. It could even be something that they enjoy eating or that they do to get your attention. Fortunately, this habit does not usually affect their health. In any case, it can always be corrected by simply picking up the feces immediately and restricting access to it.

11. They lick their nose 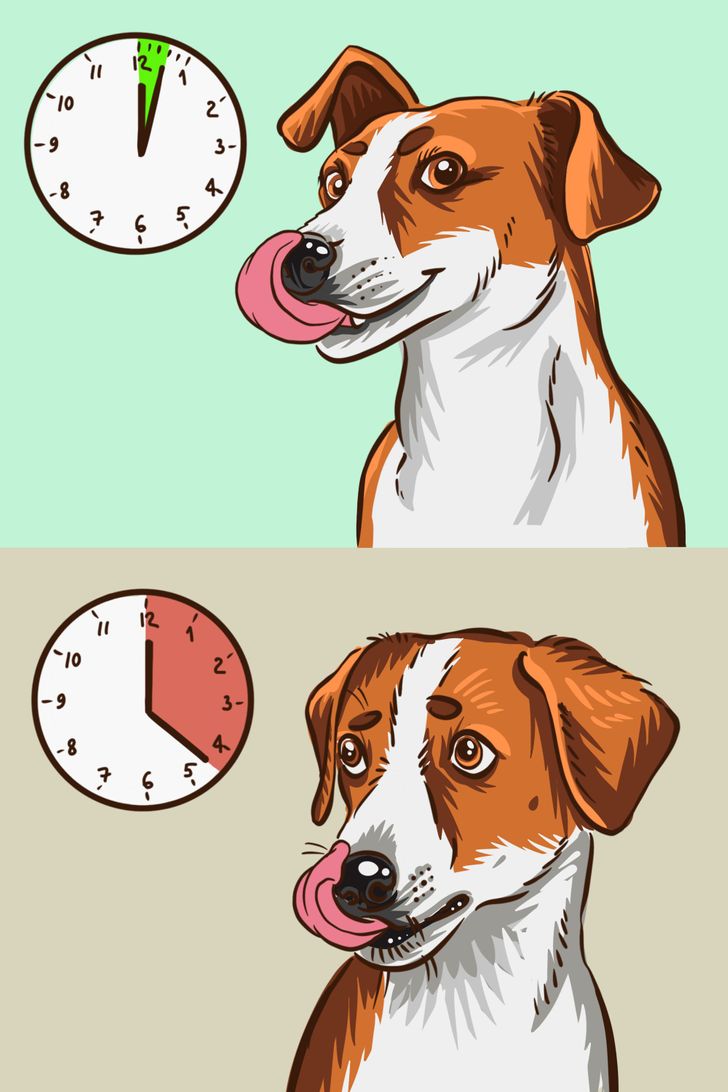 Dogs lick their own nose on a regular basis to keep it moist. Doing that also helps them enhance their sense of smell to better identify odors. Let’s not forget that smell is their primary sense. However, under certain circumstances, this can also be a part of their body language. When a dog persistently licks its nose, it could be trying to let you know that it is feeling anxious, fearful, confused, or nauseous. As a general rule, bear in mind that when the behavior of your dog changes suddenly, it’s always better to seek the advice of a veterinarian.

12. They take food away from their bowl 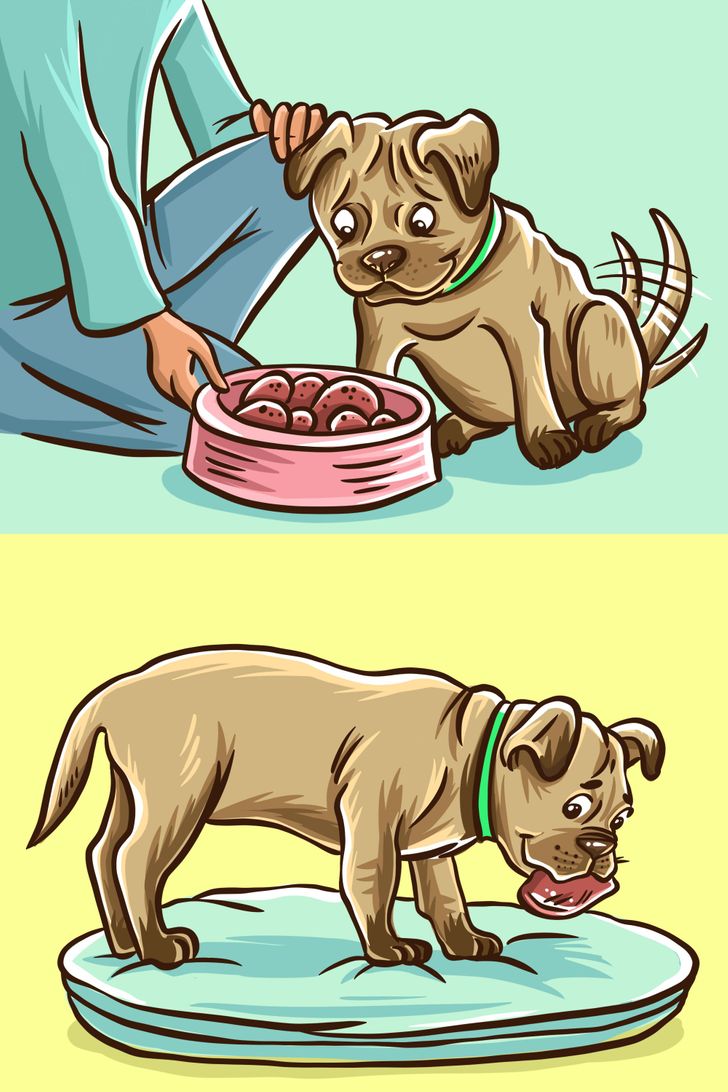 Some dogs prefer to take food out of their bowl and eat it elsewhere. This may seem a little strange to you, since humans are used to eating on plates. But the reason your dog does this is that, if he lives with other dogs, he or she might prefer to move away than to have to “compete” for food with a more dominant dog. Another possible cause for this behavior may be that your furry friend finds the noise made when eating unpleasant. Like, for example, if its food is served in a metal bowl.

What are some of the things your dog does that make you ask yourself whether they are from this planet or not? What makes them special?