Fighting back tears, Brooke held down her baby boy Kingsley as he scre*med out in agony.

Unable to bear the sight of her little son in distress, the mum of two ran out of the room, leaving her partner Kewene to pin back their squirming boy.

Kingsley has a port-wine stain (PWS), a permanent maroon-coloured birthmark, that covers the left half of his face.

When he was just a few months old, Brooke arranged laser treatment to lighten the facial discolouration – and began documenting her baby’s journey online. 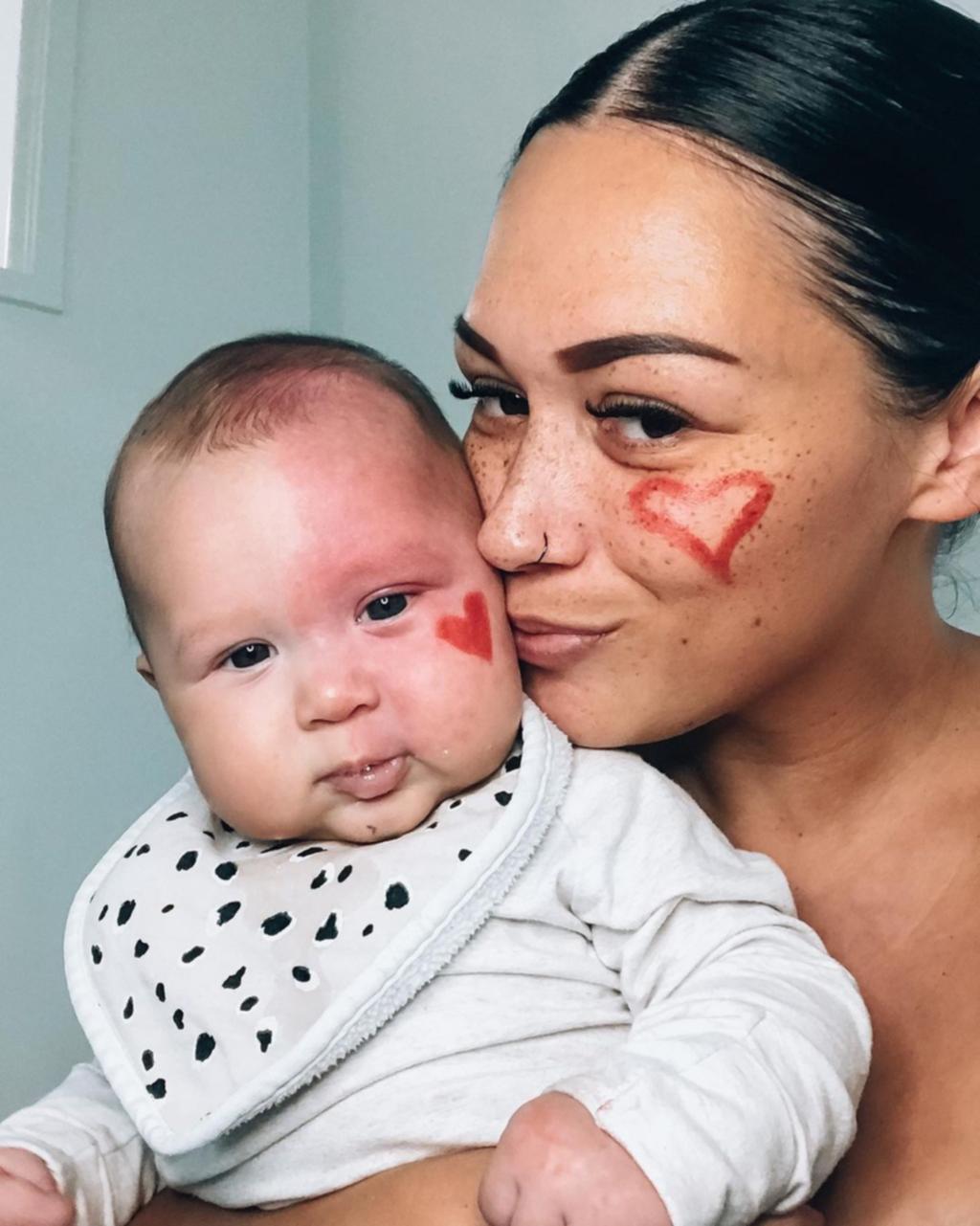 But the Queensland mother was labelled “a monster” for putting her son through the treatment.

“People thought I was doing this purely for cosmetic reasons and that just broke my heart,” Brooke says.

“I would never put my kids through something that isn’t medically needed.”

The mother’s agonising choice wasn’t simply because Kingsley’s PWS was “just a birthmark”.

His ‘strawberry kiss’ is also growing on his brain.

‘I couldn’t see anything’

However, as her baby was removed from her uterus by C-section, the doctor’s expression was one of concern.

“My partner just told me he was so cute but the doctor was worried about something on his face,” Brooke says.

“But they brought him over to me and I couldn’t see anything.”

As Kingsley rested on her chest, the mum didn’t know how to feel as the doctor began requesting specialists and scans for the newborn straight away. 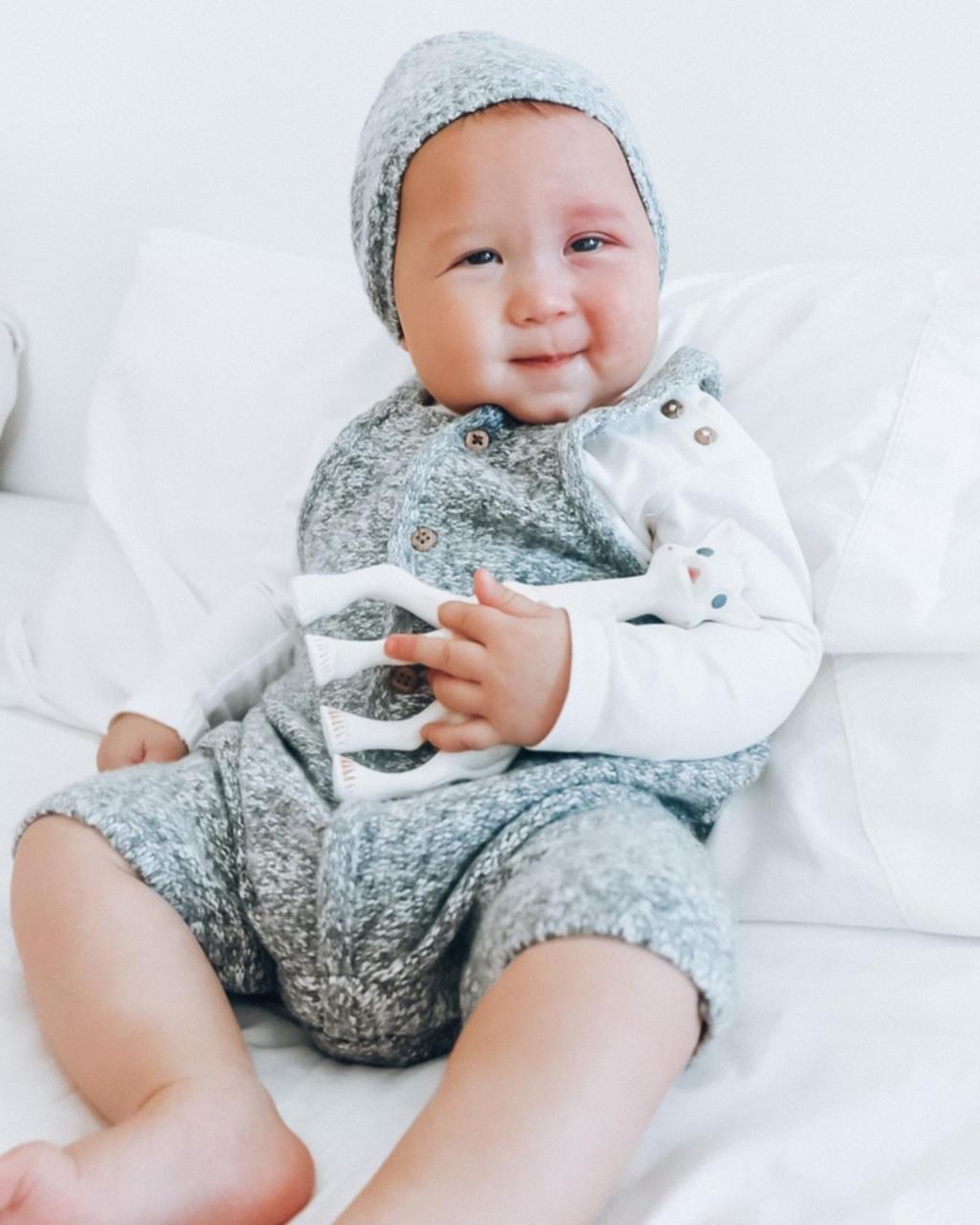 “I thought maybe it was just a bruise from where they pulled him out but she told me they didn’t touch anywhere near there,” Brooke says.

“I didn’t think anything of it, but they were really worried.”

From there, the family was taken to the ward, where specialists revealed they thought Kingsley had a PWS.

“It will progress over time, it will darken and could become lumpy,” the mum says.

“It’s extra blo0d vessels that have been brought to the surface, so if he scratches his face he will need to go to hospital to stop the bleed.

“At first we didn’t care about the birthmark.

“But then they started explaining he could have seizures and could be blind.

“My heart just sank. When they (doctors) walked out, I instantly started crying.” 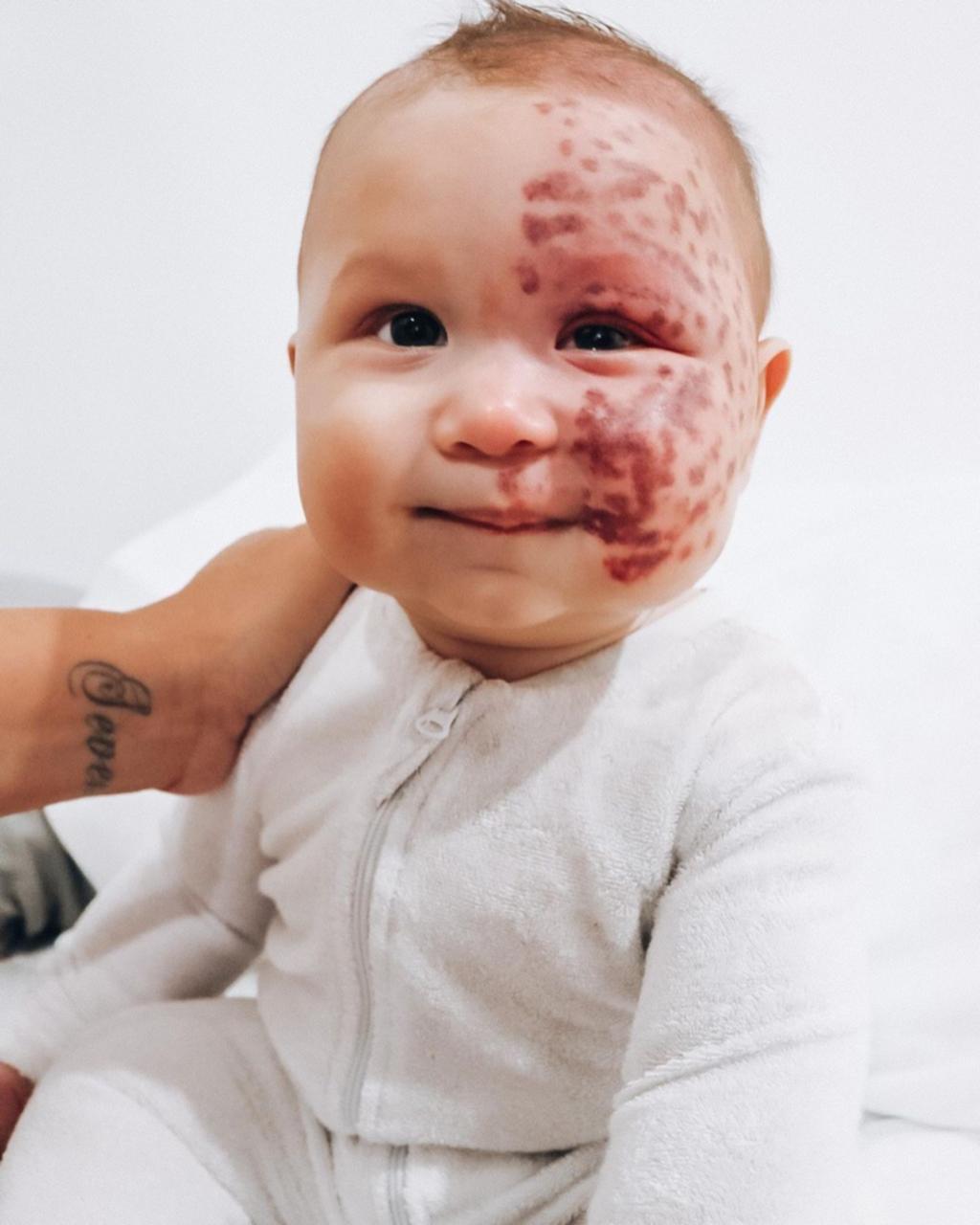 With more tests needed to confirm the diagnosis, Kewene took the hours-old Kingsley for ultrasounds, MRIs and eye exams as Brooke recovered from the birth.

As the week unfolded, the tiny boy’s condition was becoming clear to the specialists.

The once-light shading on his face was now deep in colour, and his left eye – located in the centre of the birthmark – was hazy, puffy and swollen.
Although the first MRI came back clear, his eye exam showed glaucoma, with doctors concerned about the vision in his left eye.
“It was really, really hard,” Brooke confesses.
“You see all of these mums with their babies saying, ‘Look he smiled’ and I am here just worried about whether my son will have seizures and be blind.”

With the possibility of seizures, developmental delays and blindness now a reality, the family was heartbroken for their little boy.

As Brooke began searching for information from top doctors, she came across many PWS and SWS Facebook groups. 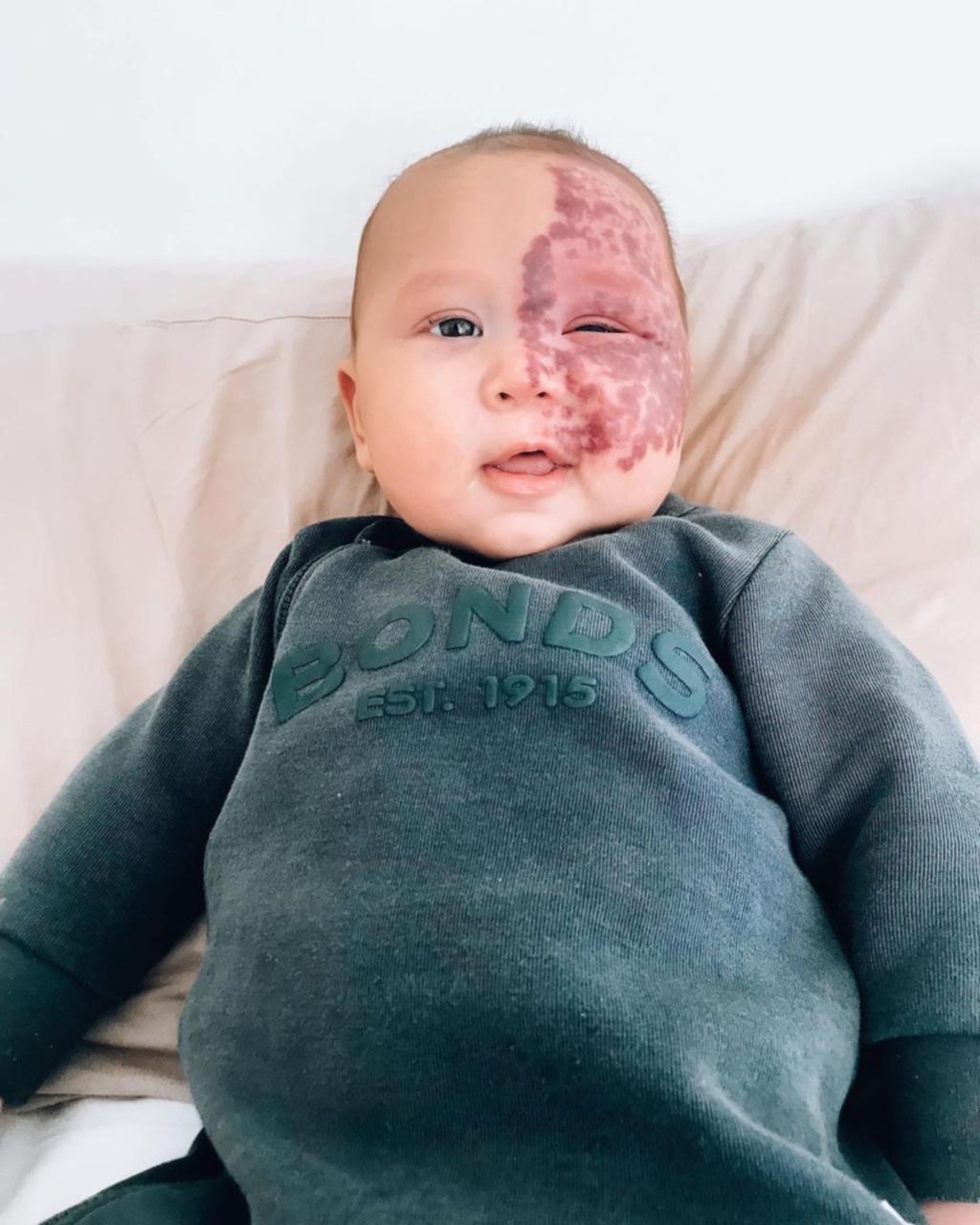 Joining them, she posted her story seeking help from people in similar circumstances and received an outpouring of love from strangers.

The treatment is said to be most beneficial to begin when a child is under 12 months old, although some claim it is purely cosmetic.

“Other parents have chosen not to because it is so hard to put your child through it,” Brooke says.

“But then I had read about children who have a port wine stain, and who didn’t get it lasered, who wish they did, because they have been bul|ied.”

However, for Kingsley, the position of his PWS meant it could potentially expand and grow over his entire face – possibly impacting his sight in both eyes. 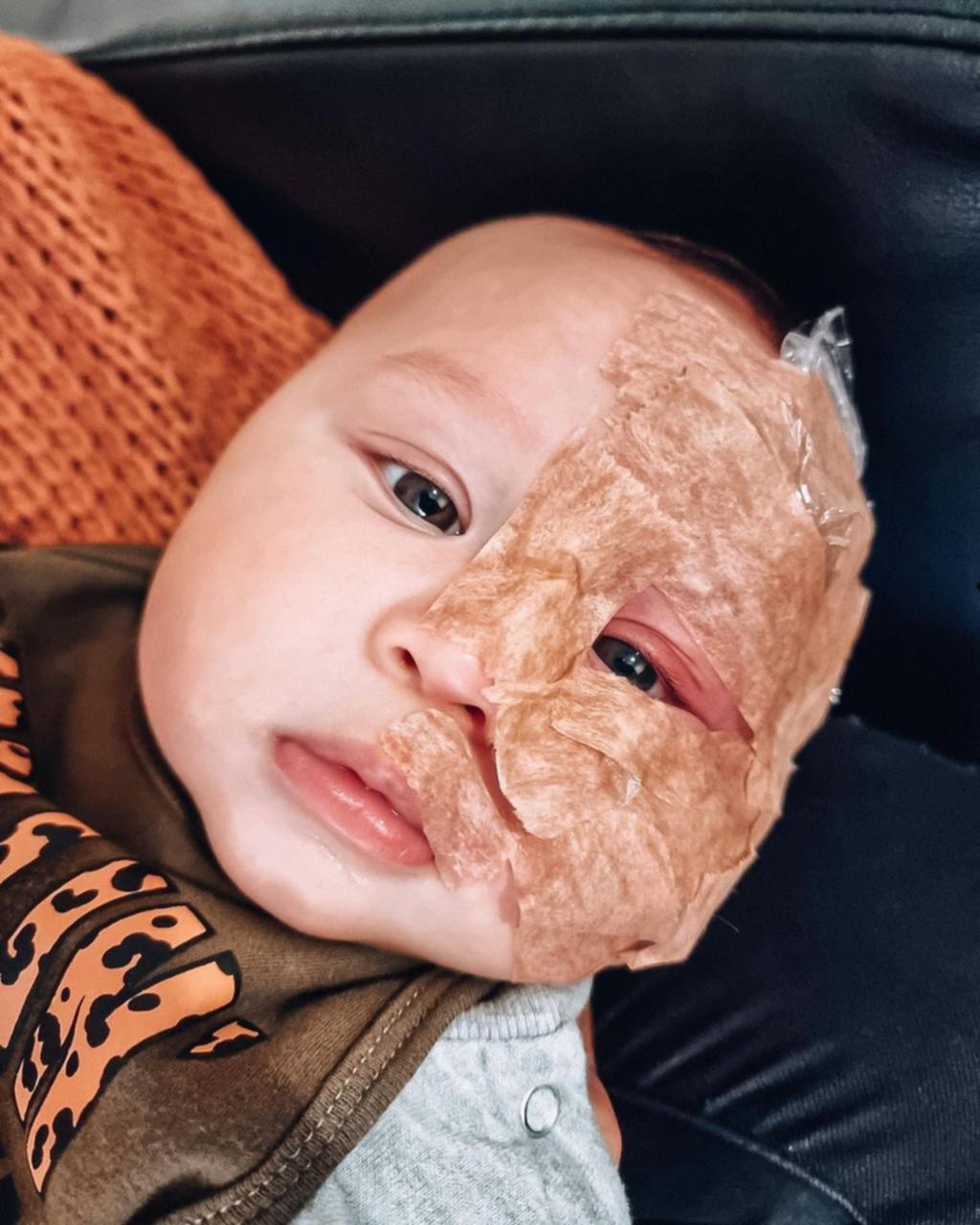 Four weeks later, Kingsley was prepped, with numbing cream placed on his face before the laser session began.

“The moment he started crying, I ran out. I just felt like a horrible mum to put him in pain,” Brooke says.

Just two minutes later, a nurse called Brooke back into the room – the lasering had finished.

“He was asleep, I couldn’t believe it,” she says.

“But he looked burnt, those tiny dots all over his face – it was hard to see.” 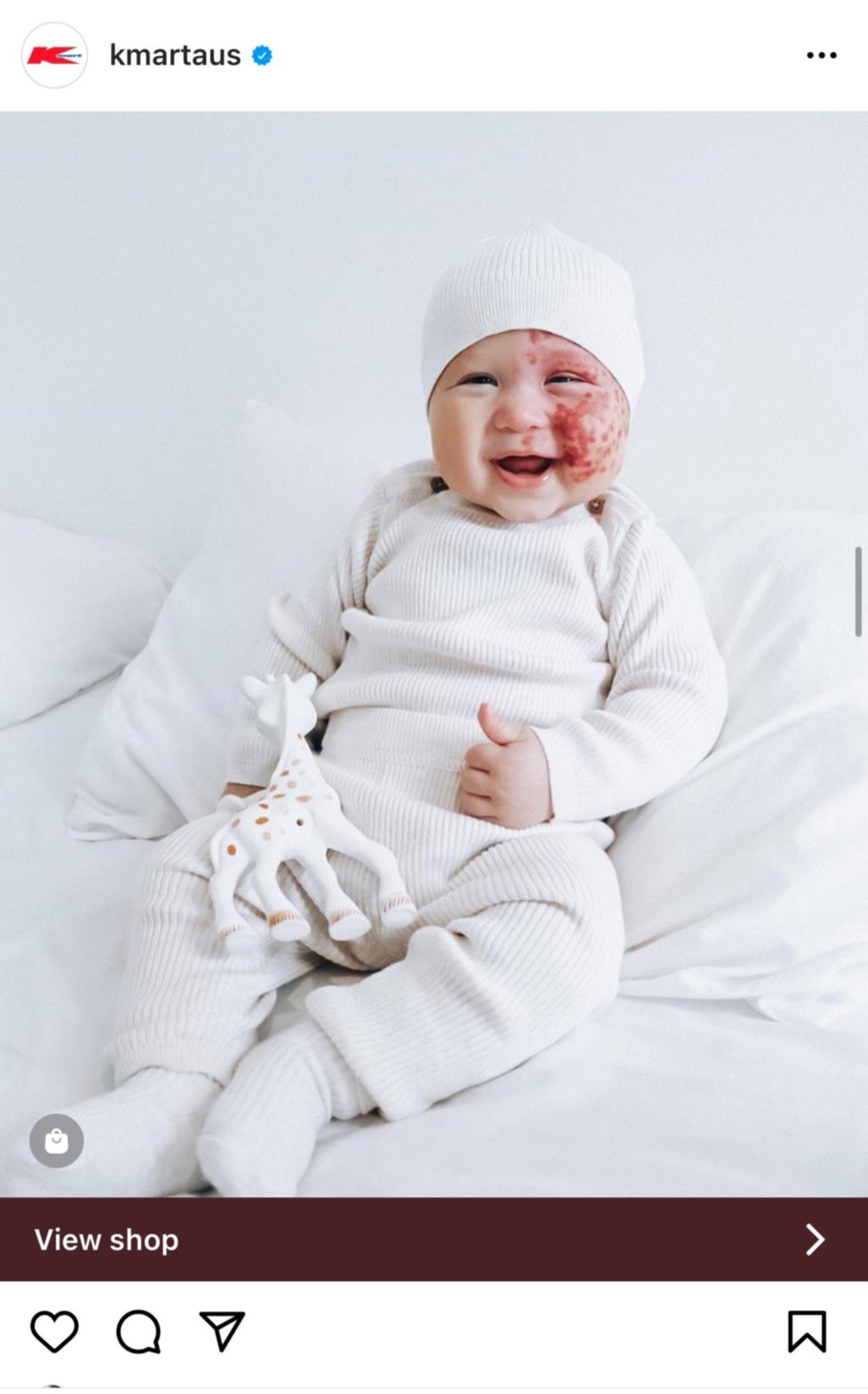 The next morning, Kingsley’s face was swollen and slightly tender but a few days later the birthmark had almost completely disappeared.

As Brooke took to social media to post about the treatment’s success, she was inundated with nasty comments.

“Someone told me to put my son down,” Brooke heartbreakingly reveals.

“At first when I got the comments, I sat there and I cried. They were disgusting.

“Some people even told me I was an abu&ive and a bad mother – they (comments) hurt.”

Brooke has moved past the “keyboard warriors” and focuses on raising her boy to be proud of who he is.

“I want to build him up to be confident,” she smiles.

“I want him to be proud of his birthmark.”

She began to ignore the online trolls and continued embracing Kingsley’s PWS journey.

Then one day, Kmart Australia messaged the mother on Instagram asking if it could use one of her photos to promote the Kmart outfit Kingsley was wearing.
“I was so happy he was being accepted,” she says.

“And for the port-wine stain community (it shows) that you can be yourself and not be judged.

“I just love that Kmart are being so inclusive.”

Kingsley hasn’t had a seizure to date and has also been hitting all his milestones.

His parents remain hopeful the SWS might not impact his development.

The little boy is due for two more laser treatments in the coming month and annual visits afterwards. 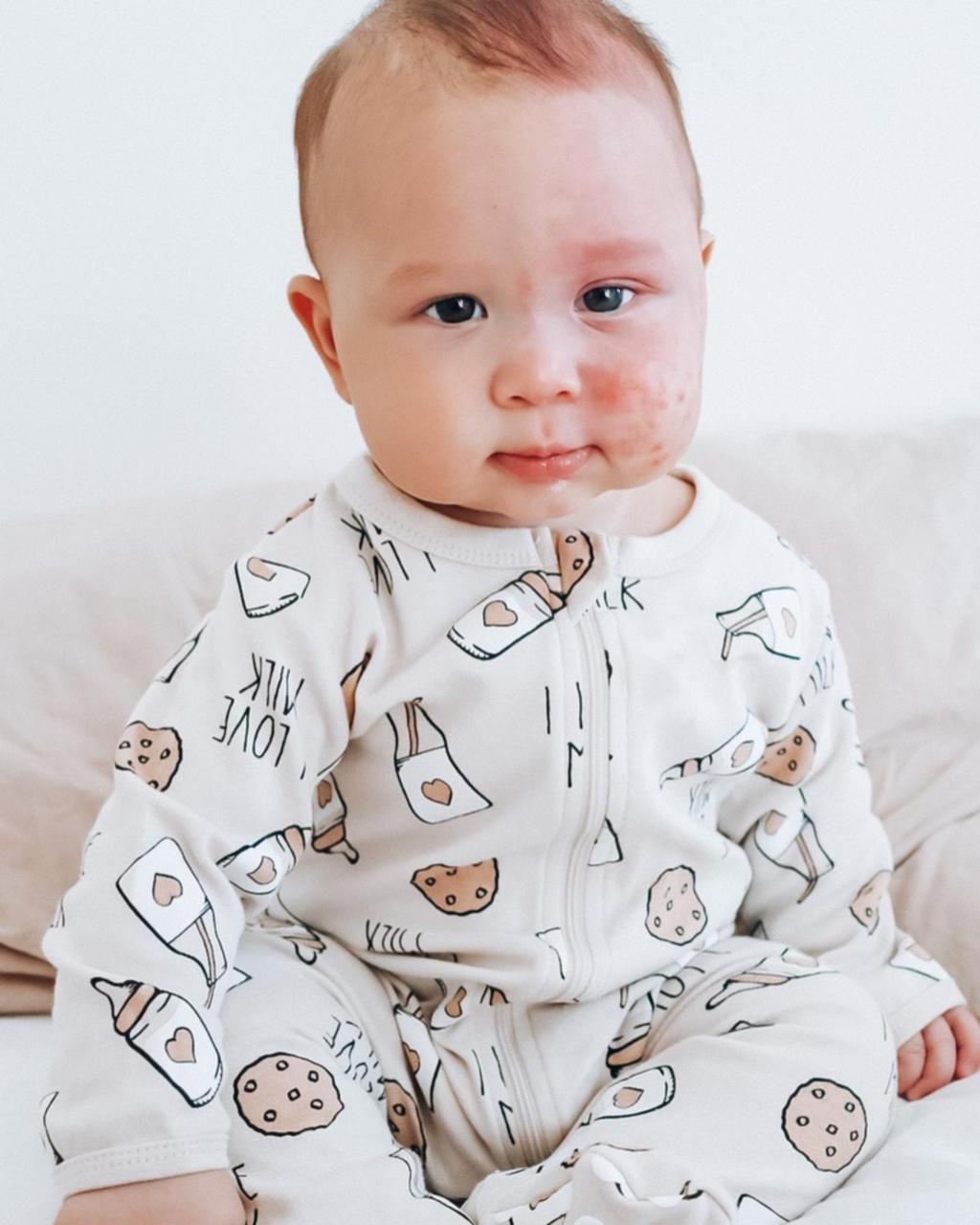 Now, Brooke works to educate the trolls that hide behind their community.

“For every one negative comment I get, there are a thousand positive ones,” she says.

“And almost every day I am thanked by other parents or people with port-wine stains for speaking – and that makes it all worth it.”