Your girl Cardi B is back with a new single and some choice words for those who’ve been hating on her lately.

In addition to her new record “Press” being dropped, Cardi also took time to speak on her canceled shows and decision to get plastic surgery.

For those who don’t know, here’s what you need to know about Cardi B.

The reality TV star turned rapper has come a long way since her earlier years of being a stripper.

She has several number one songs under her belt, won a Grammy award and has also managed to turn herself into a household name overnight.

She’s got an impressive figure.

The Money rapper is known for having assets in all the right places and she knows it.

Cardi is far from shy when it comes to showing off her body on her social media and even raps about it in many of her songs.

She also became a mother recently.

2018 and 2019 have been treating Cardi good. In addition to a blossoming career, Cardi also got married to Offset from the Migos.

Which is why it was so mind-blowing to see Cardi at the Billboard Music Awards.

The Bodak Yellow rapper stepped onto the award show red carpet in a stunning canary-colored outfit but all eyes were on something else.

People couldn’t help but notice that Cardi’s abs were on point! Like sis was looking beyond snatched!

In fact, to some people, they looked almost too perfect.

Some people speculated online that her abs might be more likely the result of liposuction and not so much hard work and exercise.

However, some people had faith and believed that Cardi’s post-baby body was all natural.

It wouldn’t have been the first time Cardi’s had work done on her body.

In the past, she’s openly discussed getting dangerous butt-enhancing injections in order to make more money as a stripper.

“I felt like I was gonna pass out. I felt a little dizzy. And it leaks for, like, five days,” she told GQ magazine.

Cardi has also been open about having bre*st implants.

“I got my tits done when I was 19 and I never wore a bra and s—,” Cardi said in one Instagram video while getting dressed.

After giving birth to baby Kulture, Cardi went under the knife again.

She told _Entertainment Tonight_that she would be going under the knife again after her skin became “stretched out.”

However when it came to getting liposuction, the verdict was still out.

Initially, after giving birth, Cardi showed off a perfectly flat stomach and declared that she never had lipo done before.

“I never did lipo, bro. Never,” she said in a video three months after Kulture’s birth.

At point she even said she felt like she lost too much weight.

In one Instagram Live video, Cardi said that she was “depre&sed” because she lost too much weight after giving birth to baby Kulture.

“It’s so crazy because when I first gave birth, I did everything to lose my baby weight. I was drinking Teami [tea] so it could curb my appetite and now that I lost all the baby weight…I don’t like looking too skinny,” she said.

It looks like the secret’s out and she finally took the plunge, however, because Cardi is now speaking openly about her lipo.

Back in May, Cardi admitted during a performance that she should have cancelled because she hadn’t finished healing from her liposuction.

“I shouldn’t really be performing because moving too much is gonna f–k up my lipo. But b—h, I’m still gonna get my motherf–king money bag, let’s go!” she said.

In August, Cardi addressed the liposuction rumours yet again.

This time she maintained that she had never done liposuction before but admitted that she was thinking about it.

“I still feel like I got a lot of love handles right here,” she said while grabbing her stomach during an Instagram Live broadcast. “It’s not much but it’s like — I’m used to having, like, a real tight stomach.”

When asked about why she eventually told fans about the surgery, Cardi said she wanted to be honest with her fans.

“It was important for me because I don’t like lying about things,” she told E! News at the launch of her second Fashion Nova collection.

Cardi also touched on how difficult the procedure is and how lengthy the recovery is.

“When you see somebody that had lipo you think that they just go into the doctor’s and like boop, you come out and you look amazing, but it’s actually like a very long process, recovery,” she said. “It actually takes like a little bit more than three or four months.”

Since then the star has canceled a number of shows. 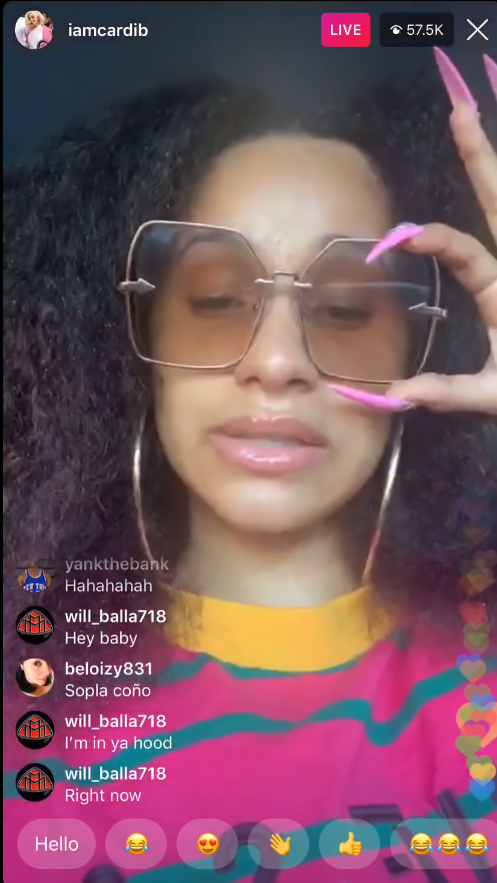 The rapper took to Instagram Live to address her fans and explained that she needed to cancel shows in order to heal from surgery.

In the video, Cardi says while she has recovered in some aspects from surgery, she’s still not fully healed and performing can potentially make it worse.

Well she also had some choice words for the people calling her lazy for getting liposuction.

“I do whatever the f*ck I want to do with my body,” Cardi said. “I don’t have the time of day like you do. My job as an entertainer is a 24-hour job, bro. So no I don’t have time to work out. I wanted specific things that I know that no matter how much I work out won’t get fixed.”

Cardi then made sure we got her message loud and clear by going fully n*de and dropping her new single “Press.”

The follow-up to her 90s R&B-inspired Please Me is a lot more like the badass, aggressive bars we’re used to from Cardi.

To add insult to !njury, Cardi says she’s losing out on a ton of money from having to cancel shows.

Some fans took to social media to share their disappointment about the cancellations.

#CANCEL since youre out here cancelling shows because you rather get plastic surgery than work out!

“I thought I liked Cardi B until she said the reason she didn’t cancel any of her shows after lipo and a b00b job was because she ‘loves money’ .. What about all your fans that have paid for a ticket and arranged to make it to your show? Prioritising money over fans,” one fan Twitter.

Another wrote, “#CANCEL since youre out here cancelling shows because you rather get plastic surgery than work out!”

In it, she appears to call out the media and haters who are all a little too “pressed” about what Cardi does with her life.

In other words, let her do what she wants to. Okuurrr?!