We’ve all had those boring wrong number texts from children we’ve never met accusing us of being their parent, these however you won’t believe. The situations these people find themselves in when their wrong number replies are ridiculous but what’s even between is what they write back. From nudes to family disputes you can expect anything, so sit back and get ready for these hilarious and astounding wrong number conversations. 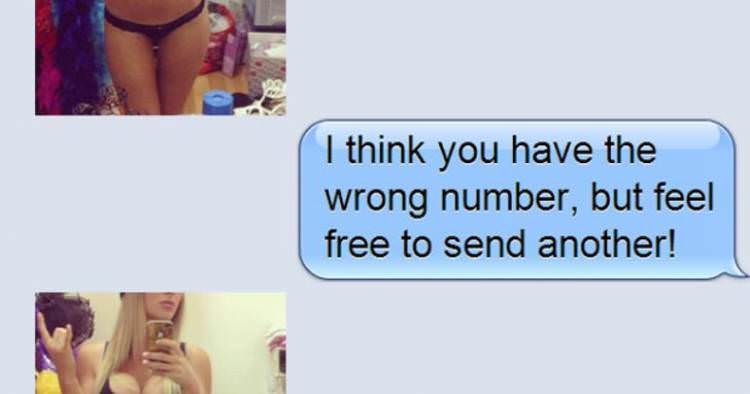 The classic opportunist gets a wrong number sexy shot. Now this situation just epitomises the high school boys dream wrong number as opposed to the boring and mundane content of everyday wrong numbers. This guy keeps his cool with the perfect response and gets rewarded with another pic. 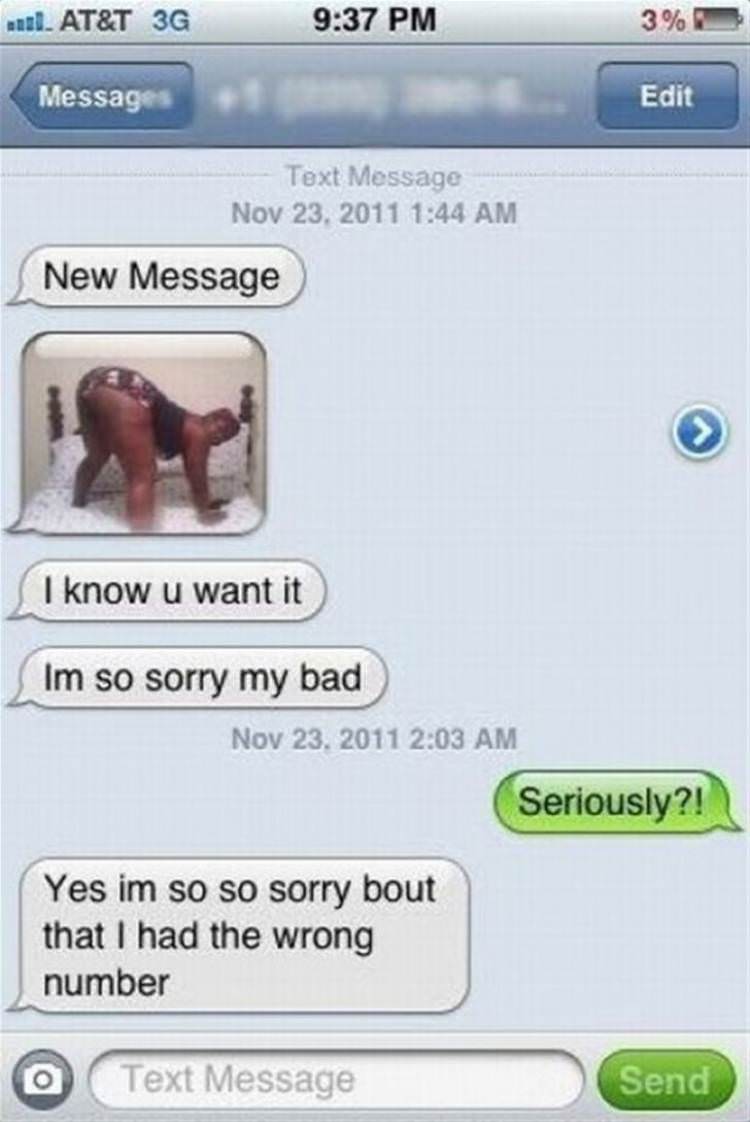 Whoever received this must have had the best laugh of their life. On the other hand, the send one of the worst. Her apologies just make the how conversation even funnier as her embarrassment is made palpable. She’ll never live this down.

The Reply to This One Is Pure Gold 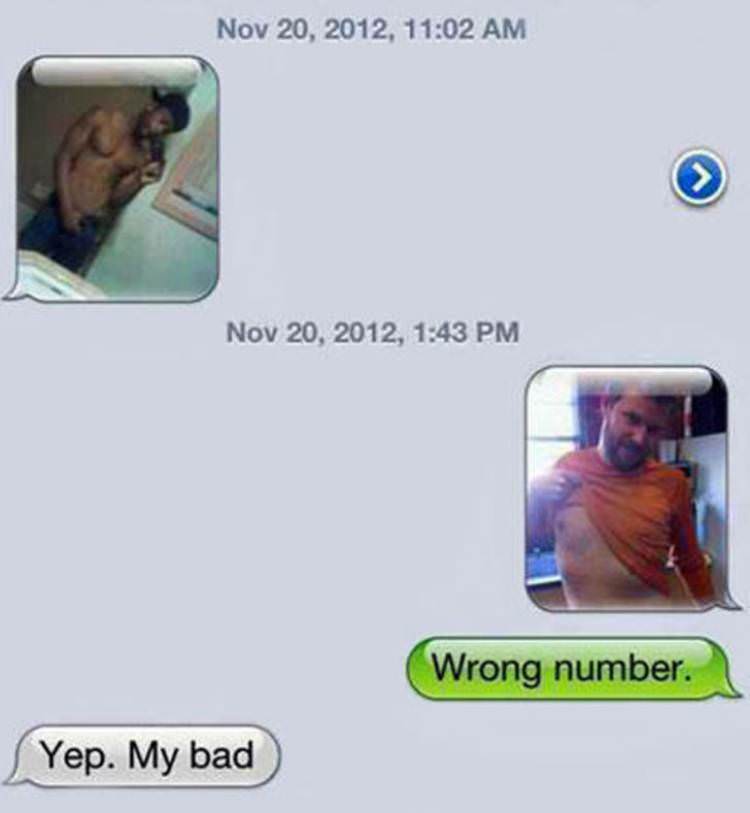 Once again another sexy photo sent to the wrong number but this time we have some male representation. The true comedy in this conversation is the brave and perfect reply photo. The final reply will get you every time as you see it dawn on the sender, and his embarrassment flow forth. 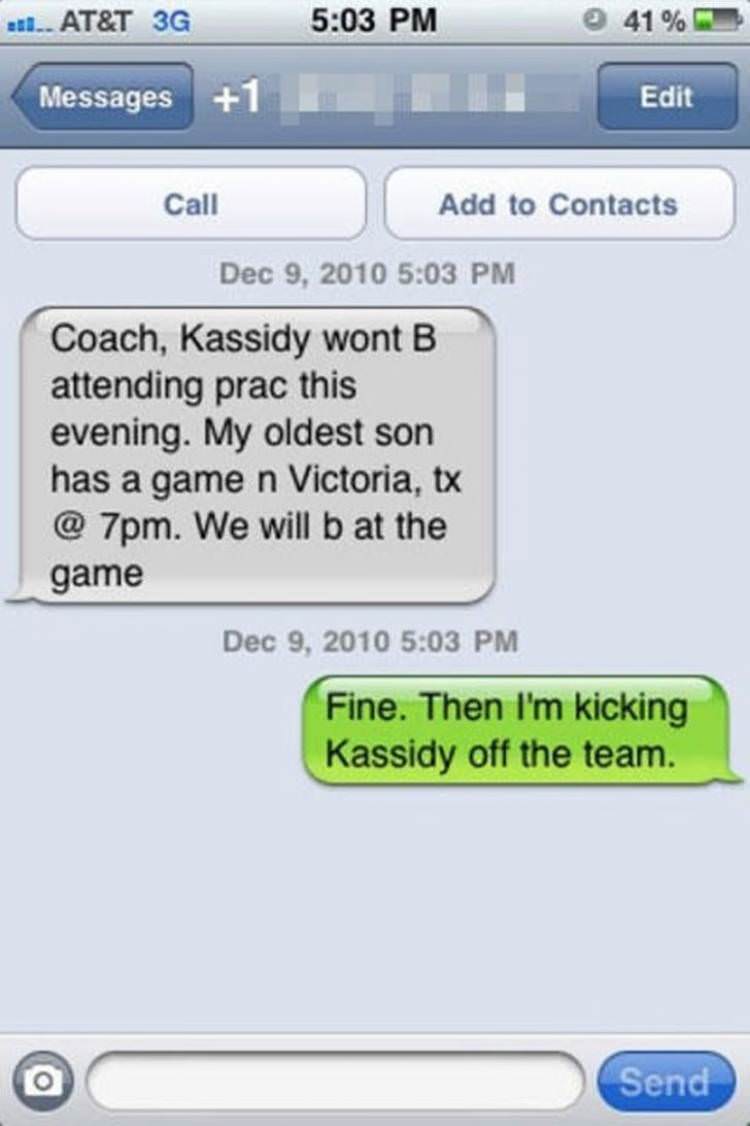 This Guy Didn’t Get a Discount After This 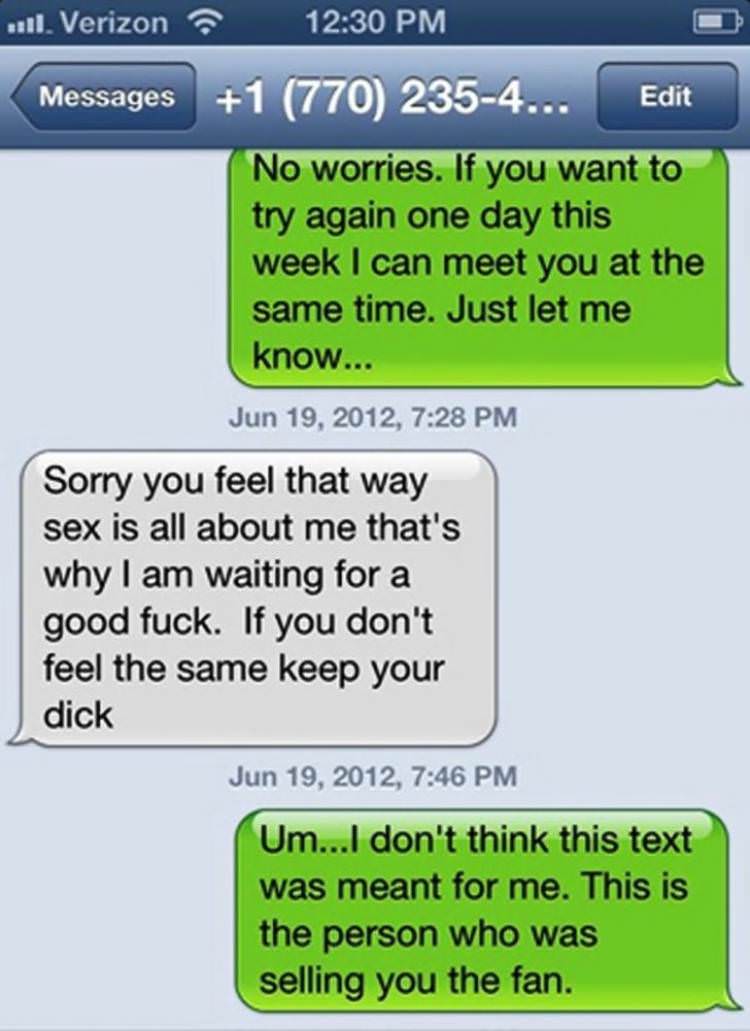 This guy just revealed how horrible he is, but to the wrong number and now it’s here for all of us to see. This is why it can be useful to remember the names and numbers of your one-night stands.

This one gets the award for having the sender on his hook for the longest time. The sender had no idea it was a wrong number and just kept replying to the wrong number she just tried to booty call, perfectly played by this mysterious receiver. 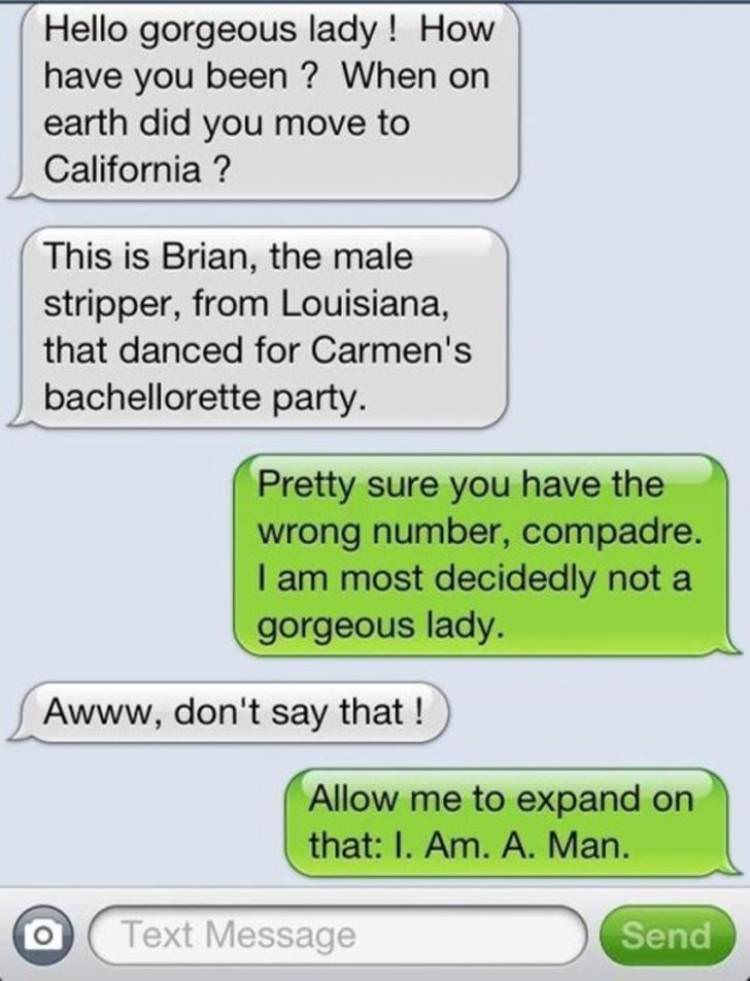 Well Carmen’s Bachelorette party must have been a big might but this poor guy wasn’t invited unfortunately. The male stripper does however seem like a cute guy and he tries to boost the girl’s self-esteem, he just didn’t get the hit that he was guy.

Why Can’t I Come Party Too. 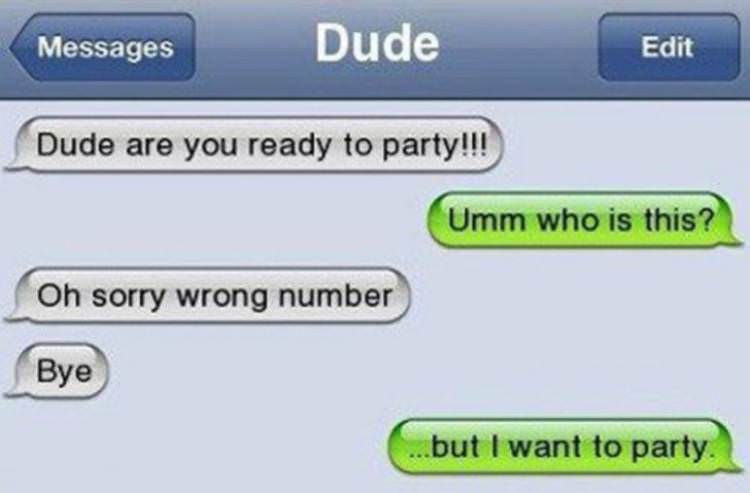 This poor lonely soul just got the text that he thought would brighten up his night, but he made the mistake of telling the sender that it was a wrong number. His sad last reply was perfect comedy, intentional or not.

Be Careful Who You Ask for Nudes 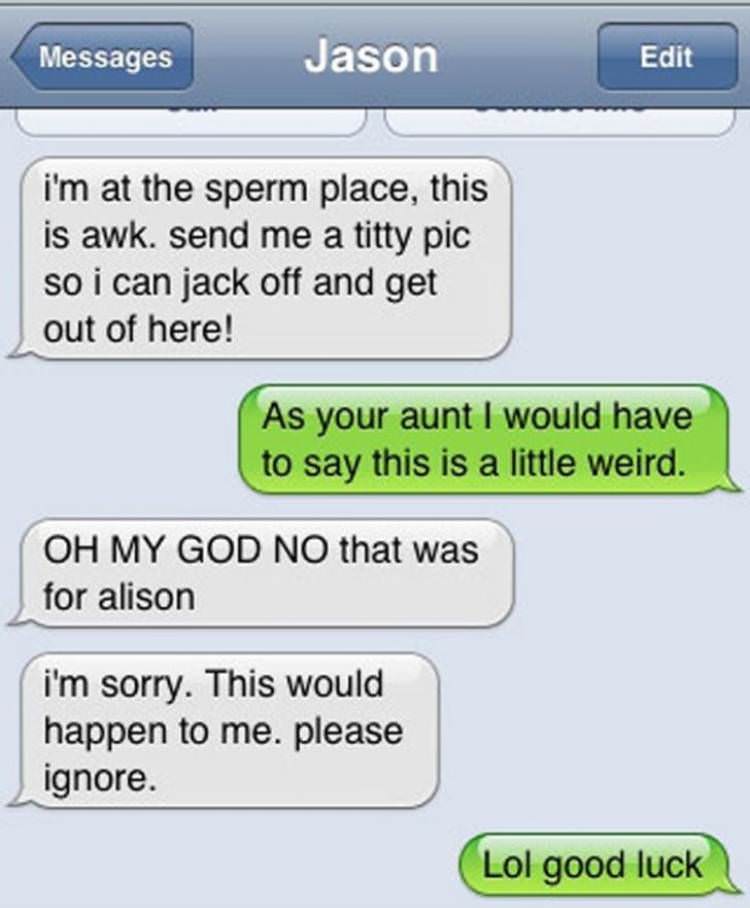 Now this one is embarrassing wrong number. The tension will be in the air the next time this guy runs into his aunt. Not to mention how impossible it will be to get over the awkwardness he was feeling at the sperm bank. 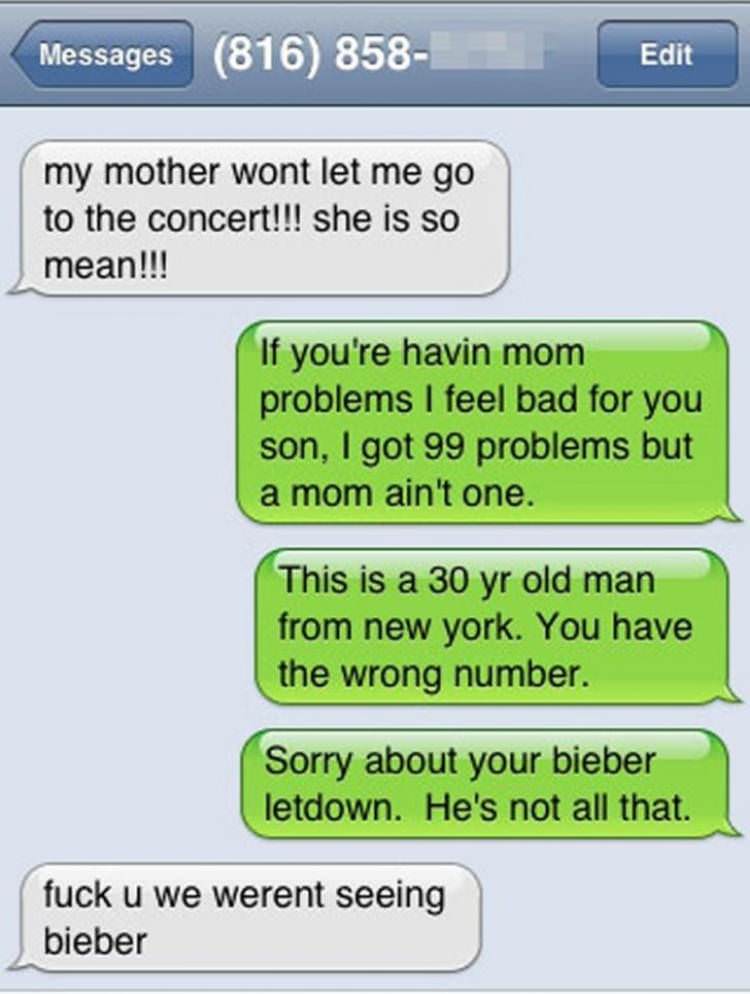 When this young girl sends her message to the wrong number sharing her high school girl problems, she gets no sympathy from this thirty-year-old New Yorker. We, however, get comedy gold. With Jay-Z references and Bieber bashing these replies truly are hilarious. 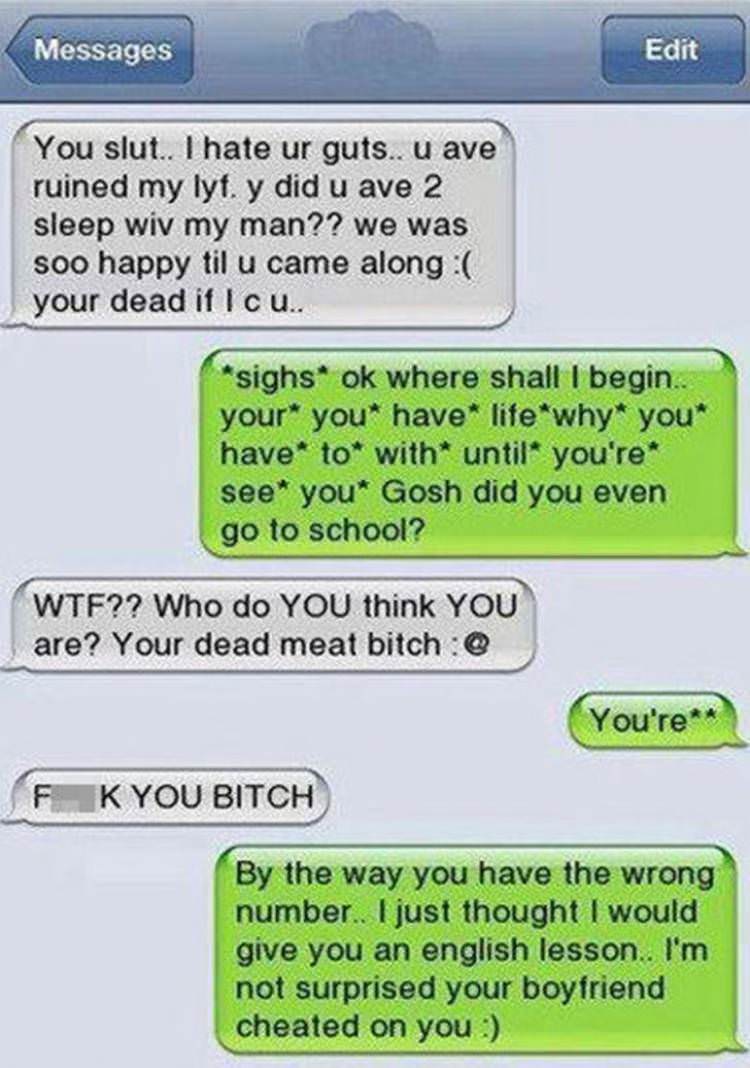 Messaging the wrong number with this kind a message will all ways be stressful but the grammar Nazi takes no prisoners. Then again with English and Grammar this bad I would say the sender needed the English lesson. I side with the receiver on this one, with that aggression and horrible writing, I’m not surprised either.

Now that’s the American Pride we like to see 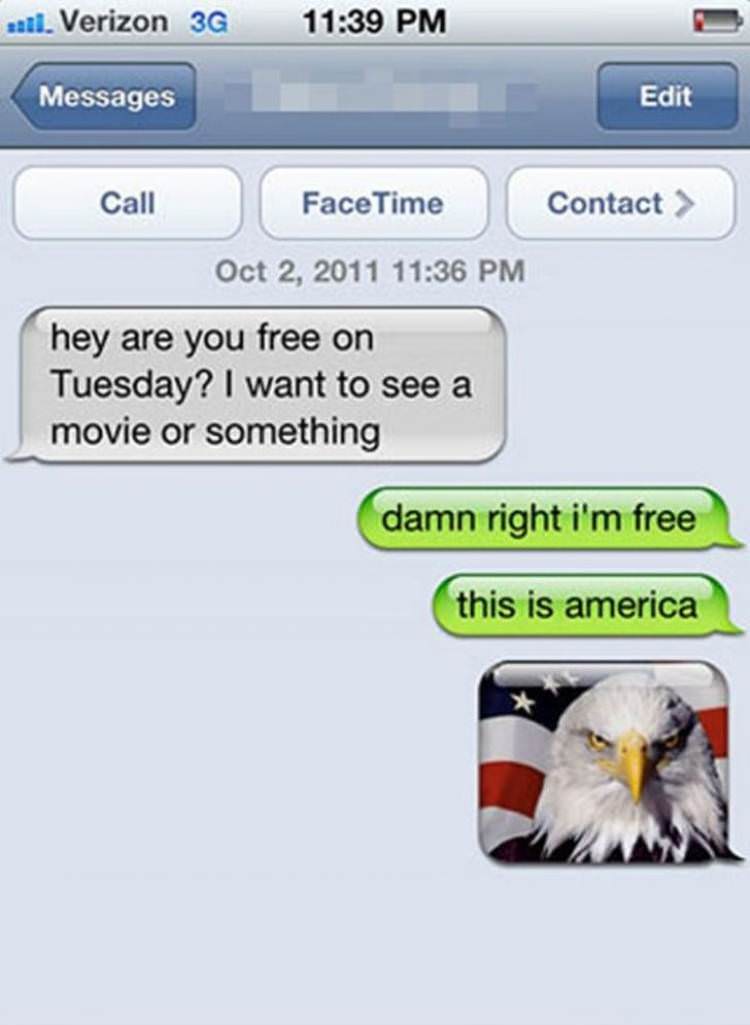 When this poor texter unwittingly sent his request to the wrong number he was asking about a different kind of freedom. The receiver took the open ended nature of the message and ran with it. I don’t think this information helped the sender with his movie date though.

When the Wrong Number Gives Your Child Away 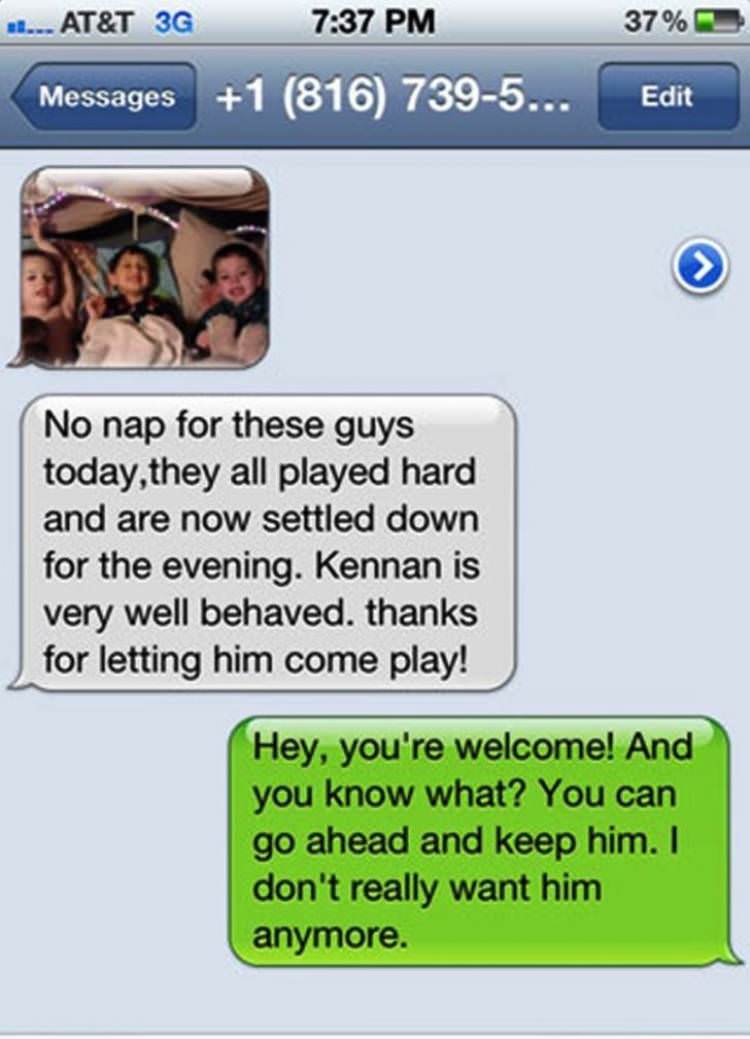 All the kids may have been good today but this wrong number receiver is playing games after bed time. Kennen’s parents might not be so happy when they come to collect their child and find that he was given away.

Well That’s One Way to Come Out of the Closet 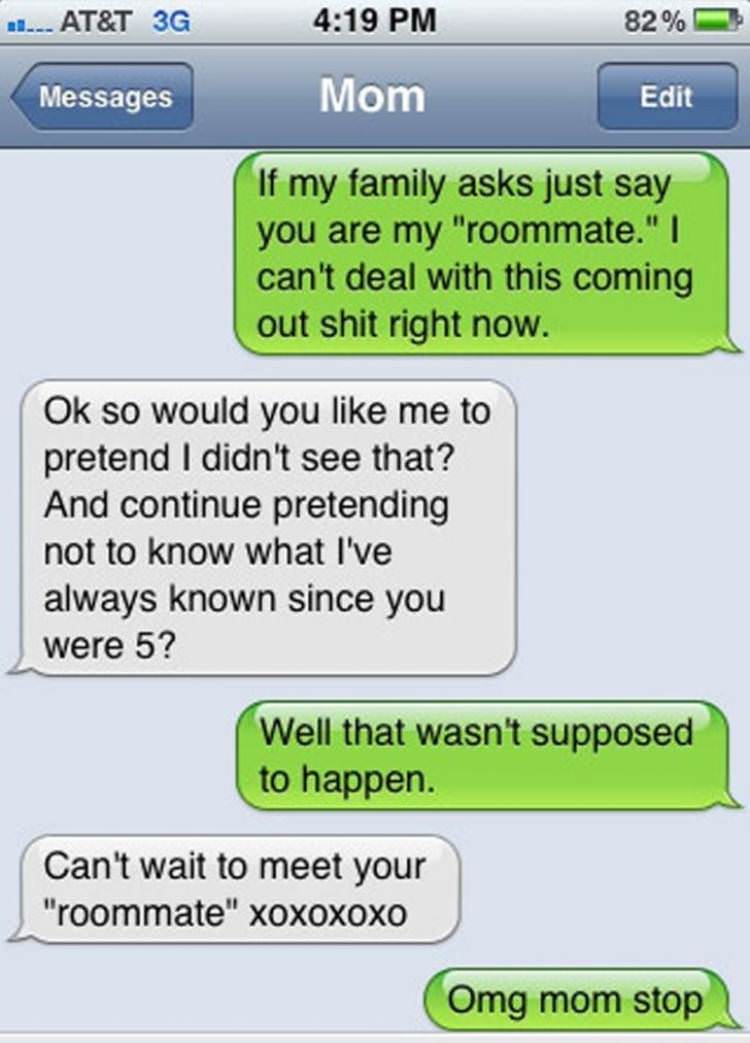 I don’t think this sender ever quite imagined coming out of the closet like this, but at least it’s done now. Like taking off a band-aid it is best done fast, it will definitely be awkward meeting the mother now.

Aren’t They Both Rude A**holes in This Situation? 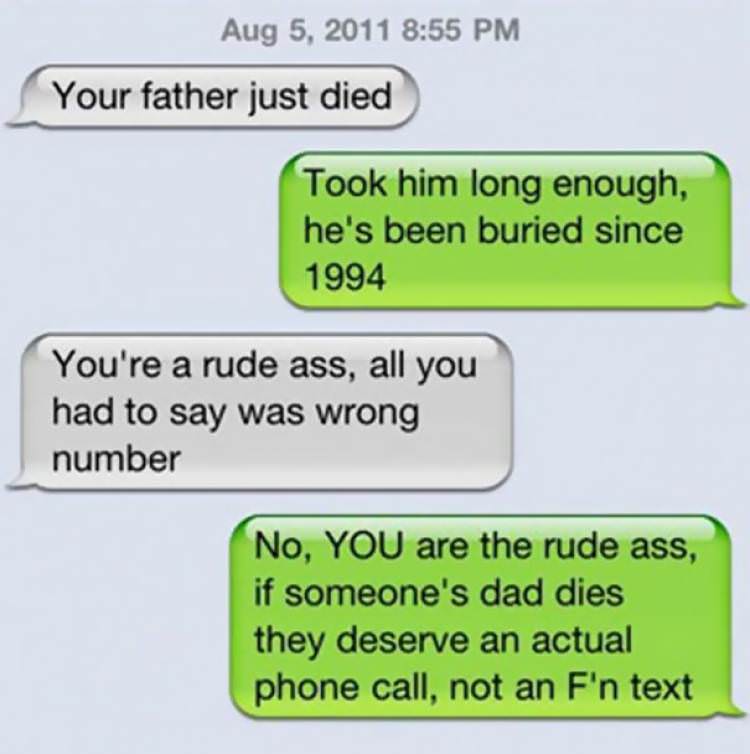 A death in the family is always a sensitive topic but no one beat around the bush in this exchange. Neither of these two hold the moral high ground in this conversation but that doesn’t stop them from arguing about it.