Japan has one of the most complicated systems of social conventions and rules of behavior. An inexperienced tourist who visits this country for the first time can easily get confused and mix things up. Local people can easily spot foreigners in the crowd by the seemingly insignificant mistakes they make. Fortunately, the Japanese are very tolerant of tourists who unknowingly violate their rules of good manners. Still, no one wants to mess things up in a foreign country, so that’s why it’s better to know those nuances.

We at Bright Side have carefully studied the rules of behavior in Japan, and the reviews of local people and tourists, and we found 14 mistakes that help Japanese people easily see a foreigner in the crowd.

1. Foreigners care about their posture less. 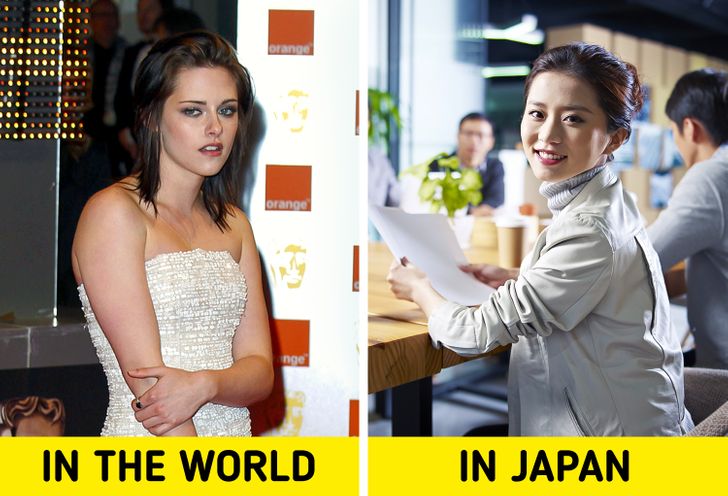 The Japanese can easily spot a foreigner by their posture. Local people say that many tourists have a so-called “cat’s back” or slouch, to put it simply.

Japanese people themselves are usually very attentive to their posture and almost never slouch that’s why it draws their attention so much.

2. The Japanese use perfume more rarely. 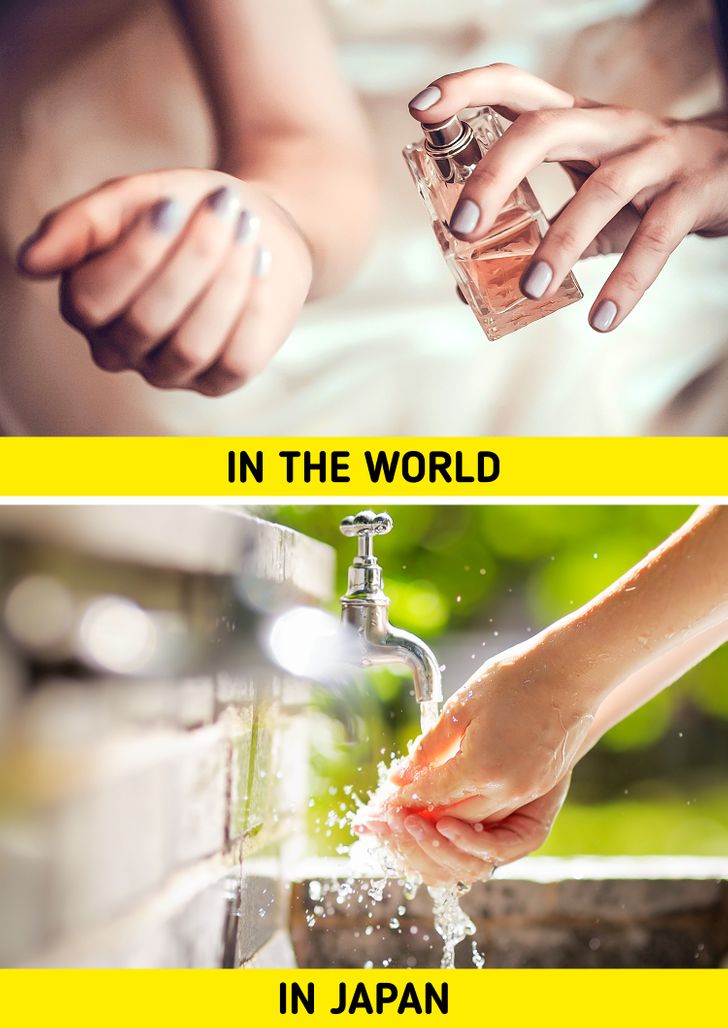 Local people are very sensitive to scents which is why they oftentimes find perfume to be too strong. According to the founder of a perfume boutique, Franco Wright, the Japanese can even perceive these scents as insulting. The best scent for locals is the absence of any scent.

The perfume market in Japan is pretty small and there are very few perfumes available in cosmetic stores. Local brands produce perfumes with the smell of cleanness — a washed body, hair, and freshly washed clothes. 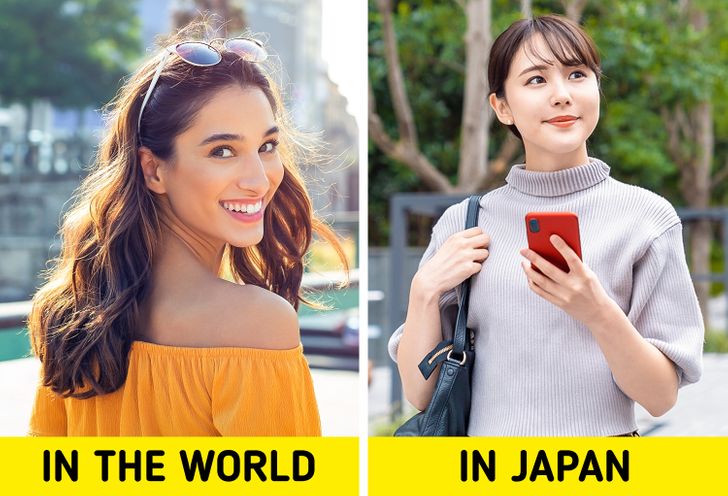 Not to mention the neckline zone. Japanese women, especially adult women, dress quite conservatively and try to cover their belly and shoulders, even when it’s hot outside. They often wear umbrellas and long gloves while trying to protect themselves from the sun. That’s why tourist girls who wear open clothing often surprise local people.

However, young Japanese girls oftentimes neglect this rule. Also, they like to wear short skirts and shorts, even in winter.

4. You should remove your shoes even in public toilets. 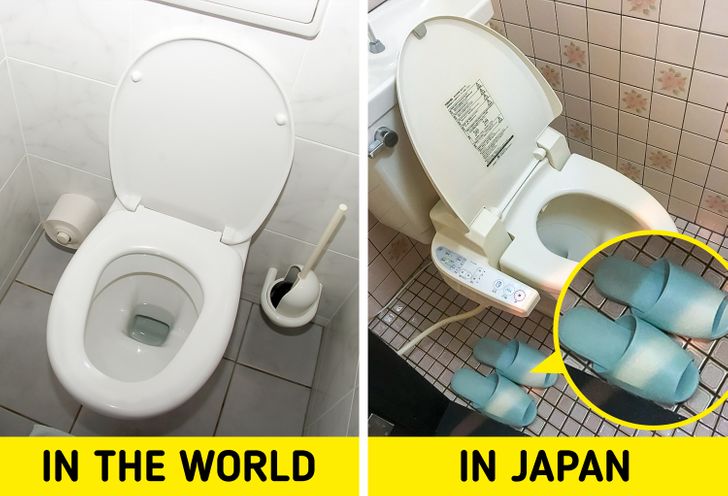 It’s not appropriate to enter Japanese homes wearing shoes. This rule is connected with how Japanese people understand cleanliness. They split the space surrounding them into “clean” and “dirty” zones. The entire house, apart from the toilet, is considered a “clean” zone. The Japanese came up with special slippers for the “dirty” zone, to not make their guests have to carry street shoes from the porch to the toilet to use the bathroom.

You can see slippers near the toilet both in private homes and in restaurants and hotels. It’s very practical — they can even help you understand whether the toilet room is occupied or not. They also help the Japanese spot tourists who sometimes forget to remove them when leaving the restroom and end up in a confusing situation. 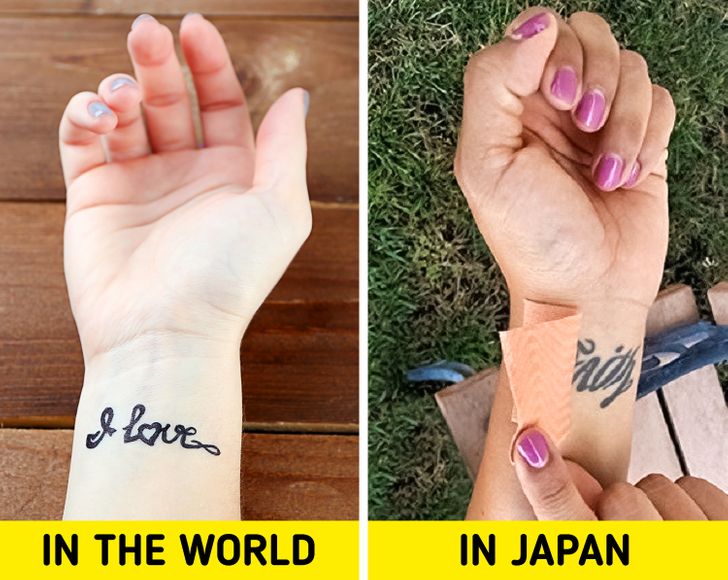 Tattoos in Japan are not as widespread as in the rest of the world. People who have them hide them with the help of clothes or special bands and elastic stockings when they go to work or to a public place.

A tattoo can slightly complicate the life of a tourist. For example, a person with a tattoo won’t be allowed to enter a swimming pool, a spa, a gym, or a traditional Japanese bath. Though if a foreigner shows their tattoo on the street, in the metro, or in a restaurant, they will likely get a compliment.

6. Try not to extend your arm when meeting people. 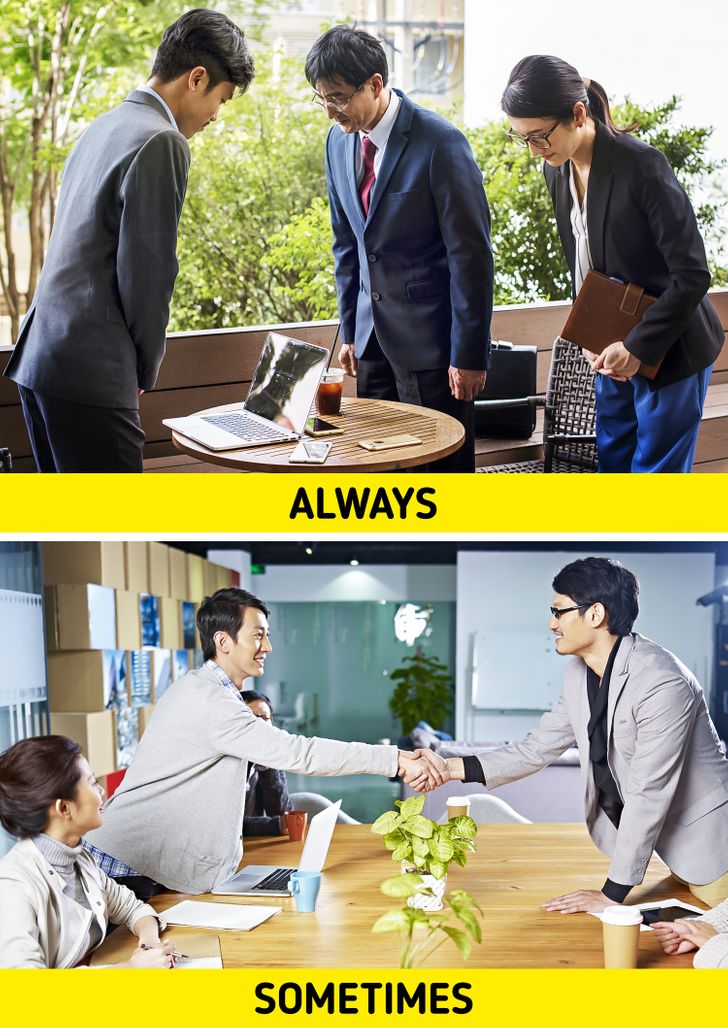 Many tourists in Japan get trapped when it comes to greeting people. The Japanese don’t approve of close body contact, that’s why you shouldn’t touch anyone, hug them, or pat them on the back. The somewhat acceptable gesture of physical contact is handshaking and it’s better to wait until a Japanese person stretches their hand out first. Otherwise, you should limit yourself with a bow.

7. It’s better to not pick up things someone has dropped on the street.

The Japanese are extremely strict when it comes to finding lost items like scarves, sunglasses, children’s toys. A tourist might unknowingly pick up an item to try to identify its owner, but it’s better to not do this. The maximum you can do is to relocate an item to a more noticeable place so that it’s easier for the owner to find it when they return searching for the item. Valuable things can be taken to the nearest police station.

8. You’d better not eat or drink in public places. 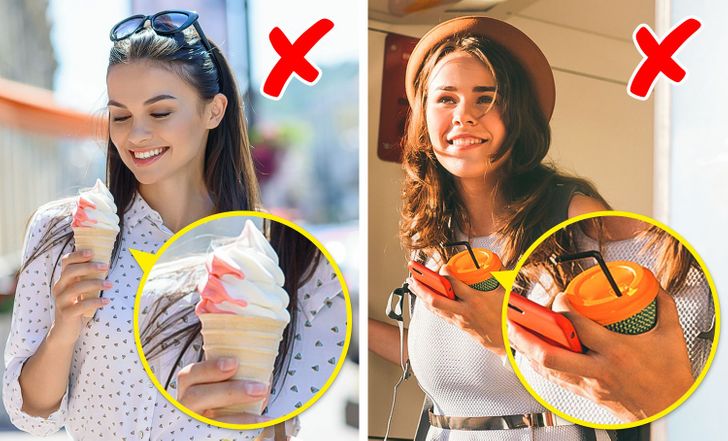 It’s not forbidden but still, it’s not something that is welcomed, especially if the products are packaged. The Japanese are very sensitive about cleanness, that’s why they might be worried about whether the eater will remove their trash after they finish eating or not.

Recently, this rule has lost its popularity and young Japanese people allow themselves to have a snack on the go. But they do it modestly and definitely not in an overcrowded space.

9. It’s ok to not give up your seat on public transport. 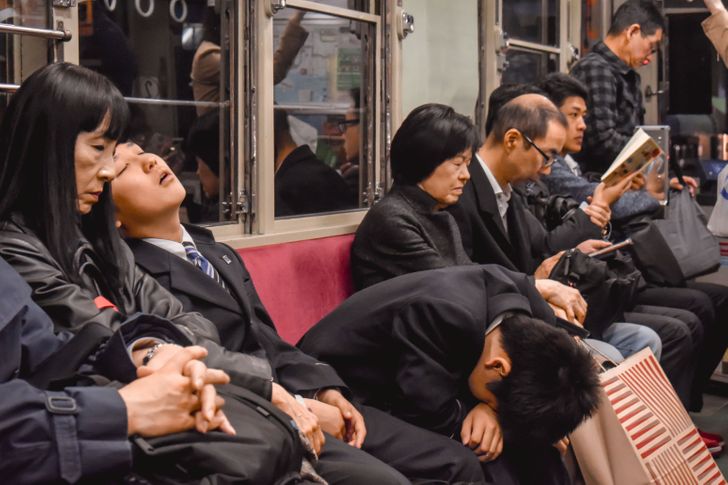 As strange as it might sound, Japanese people don’t give up their seats to other people in the subway, on buses, or on trains. Some people might even perceive it to be insulting because you are enhancing a person’s weakness by offering them your seat. Moreover, there are special seats in each wagon for elderly people and for handicapped people.

10. You don’t need to open taxi doors by yourself. 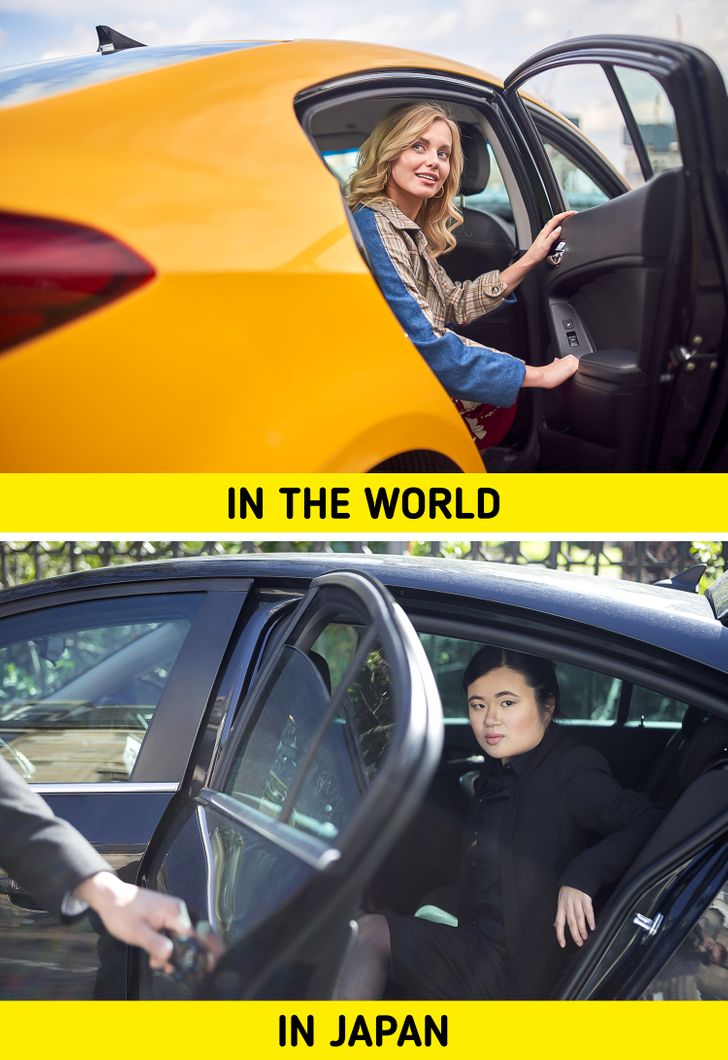 Tourists often trip themselves up when trying to catch a taxi in Japan. And it’s not surprising because local rules differ a lot from the rules we are used to. When trying to catch a taxi, one needs to lift their arm up high instead of stretching it to the side. Also, make sure to not touch the door of the car — it’s the driver who opens it for the passenger.

11. It’s not customary to leave tips in Japan. 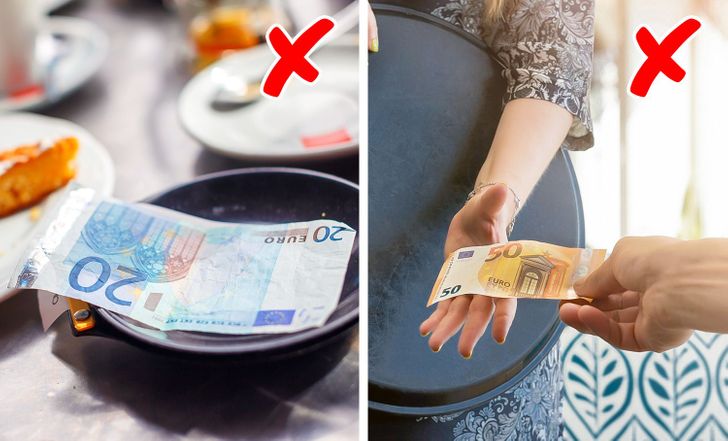 This is especially true for restaurants, cafes, taxis, and hotels. The Japanese already know that the level of service they give is their best, and hence don’t expect additional encouragement. On the contrary, they can perceive it to be rude. All you need to do is to thank them politely. At the same time, guides who work with tourists who are used to leaving tips, usually don’t refuse them. But of course, they don’t demand tips either.

By the way, it’s not customary to put money straight into someone’s hands in Japan. Before buying something, it is better to put money in an envelope in advance, and not to count it in front of the seller. If there is no envelope on hand, a special tray that is there in each shop will come to the rescue. 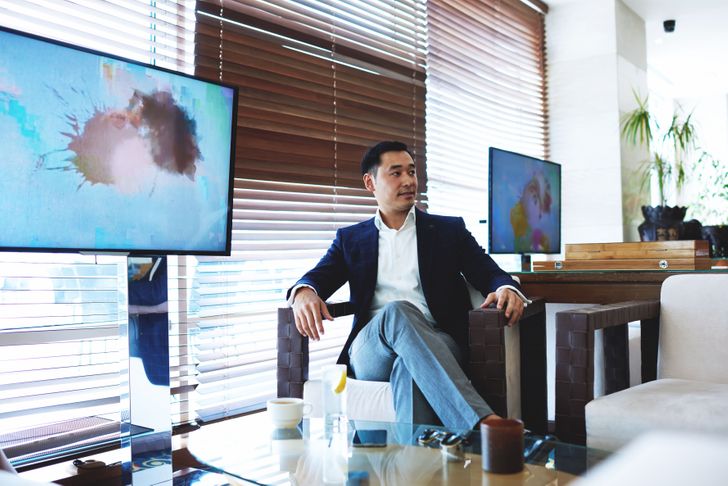 The Japanese prefer to have meals with some noise in the background. If a tourist enters an empty and quiet restaurant, the host will immediately turn on the TV or music. Foreigners who are used to having meals alone with their thoughts might find it weird because eating in silence is considered to be a manifestation of good manners in western culture.

13. At the same time, the Japanese don’t like loud talking. 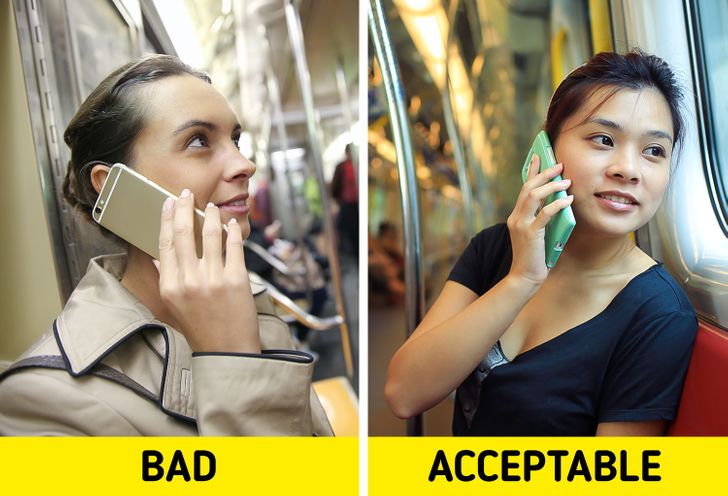 Many Japanese people consider foreigners to be too noisy, too loud-speaking, and too actively gesticulating. In order to not seem like a bad-mannered tourist, you’d better not talk on the phone amidst crowded transport (only if there are very few passengers and it’s better to turn away or cover-up while talking).

14. It’s not customary to express your attention toward the opposite sex in Japan. 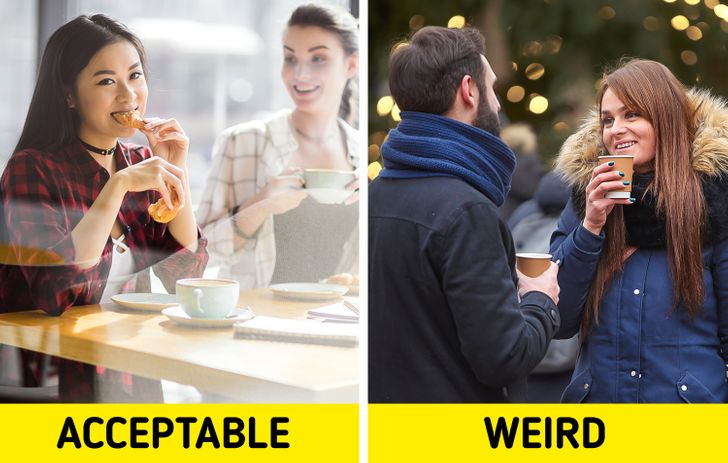 There is still a certain gender split in Japanese culture. Friendships between men and women are not a widespread thing, especially when one has a partner.

Do you think you would be able to stick to the norms of Japanese behavior and not get in embarrassing situations? Which customs of this country impressed you most of all?